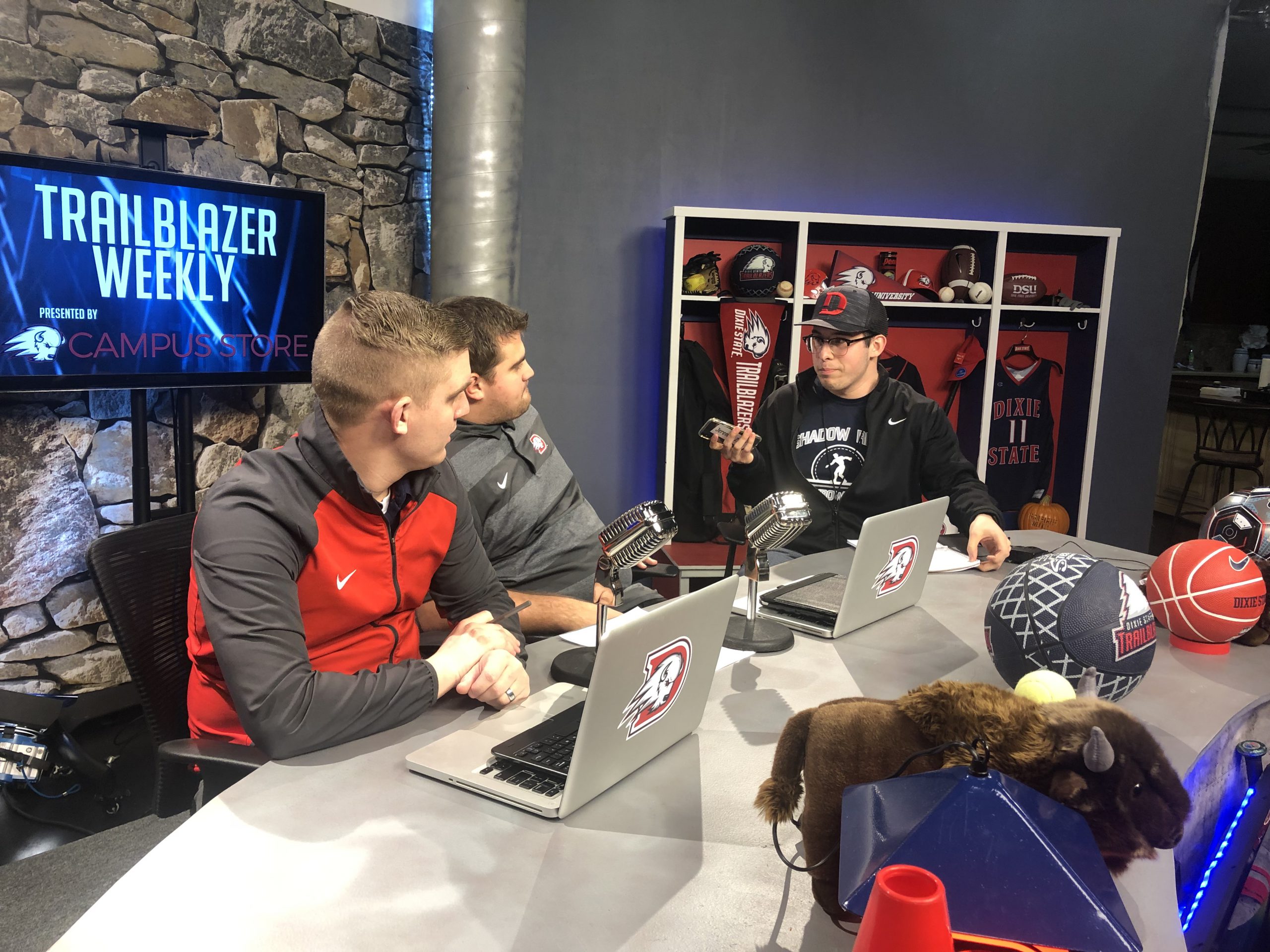 When you support your Trailblazers at a game you may see action on the field, but the real action happens when Dixie Sun News sports journalists Monique Chavez and Issac Garcia go behind the scenes to report on the games.

Dixie Sun News is the voice of Dixie State University, and that is no exception when it comes to reporting on student athletes and the sports programs.

“I think there’s a lot of students on a college campus who are interested in following sports,” said Rhiannon Bent, assistant professor of media studies and adviser for Dixie Sun News. “Not only is it filling a need for our campus, but I think it’s also something that people find a lot of entertainment in.”

Chavez, a junior media studies major from Ontario, California, said her love for sports began in middle school, continued through high school and she found a way to stay involved in sports through journalism.

Chavez said: “I did play sports when I was younger. I had three years of soccer and then joined my middle school’s drill team. In high school I was on the dance team for three years, on the cheer team for four years and was varsity cheer captain for two years. So it switched from sports to dance and cheer. I just wanted to perform.”

Chavez has been a sports reporter, a multimedia reporter and became sports editor this semester. Her favorite sport is football.

“I like understanding [sports] and being able to put myself in the position of the athletes and the coaches with their responses [to] my questions,” Chavez said when asked about her favorite thing about writing for sports.

Chavez said she likes the team work and competitiveness behind sports, and appreciates that everyone can bond over the thrilling environment at sporting events.

Being a sports journalist calls for a passion and knowledge of the games, and DSU Athletics has six men’s sports and nine women’s sports within the program.

Garcia, a freshman criminal justice major from Las Vegas, said: “I grew up playing sports. I’ve always been involved in them.”

When asked about how he became a sports writer for the Dixie Sun, Garcia said he saw the position of sports writer become available and thought it would be cool to watch sports and write about it.

“I like going to the sports games and watching them,” Garcia said. “Just meeting new people, the coaches and players is pretty cool because it gets me more involved on campus, and plus I made friends out of it.”

Garcia said he has been attending a lot more DSU softball and basketball games recently and loves the environment. This is his first semester writing for Dixie Sun News, and he said he definitely has a preferred sport.

“Football is probably my favorite sport, just because I have always played it,” Garcia said. “It’s just something I grew up doing and fell in love with it ever since I was seven.”

According to DSU Athletics, there are 433 student athletes on campus, and that requires a wide-range of reporting for both staff members.

“They both have put in the time to make relationships with coaches and players, and that is a really important part of the job too,” Bent said when asked about Chavez and Garcia.