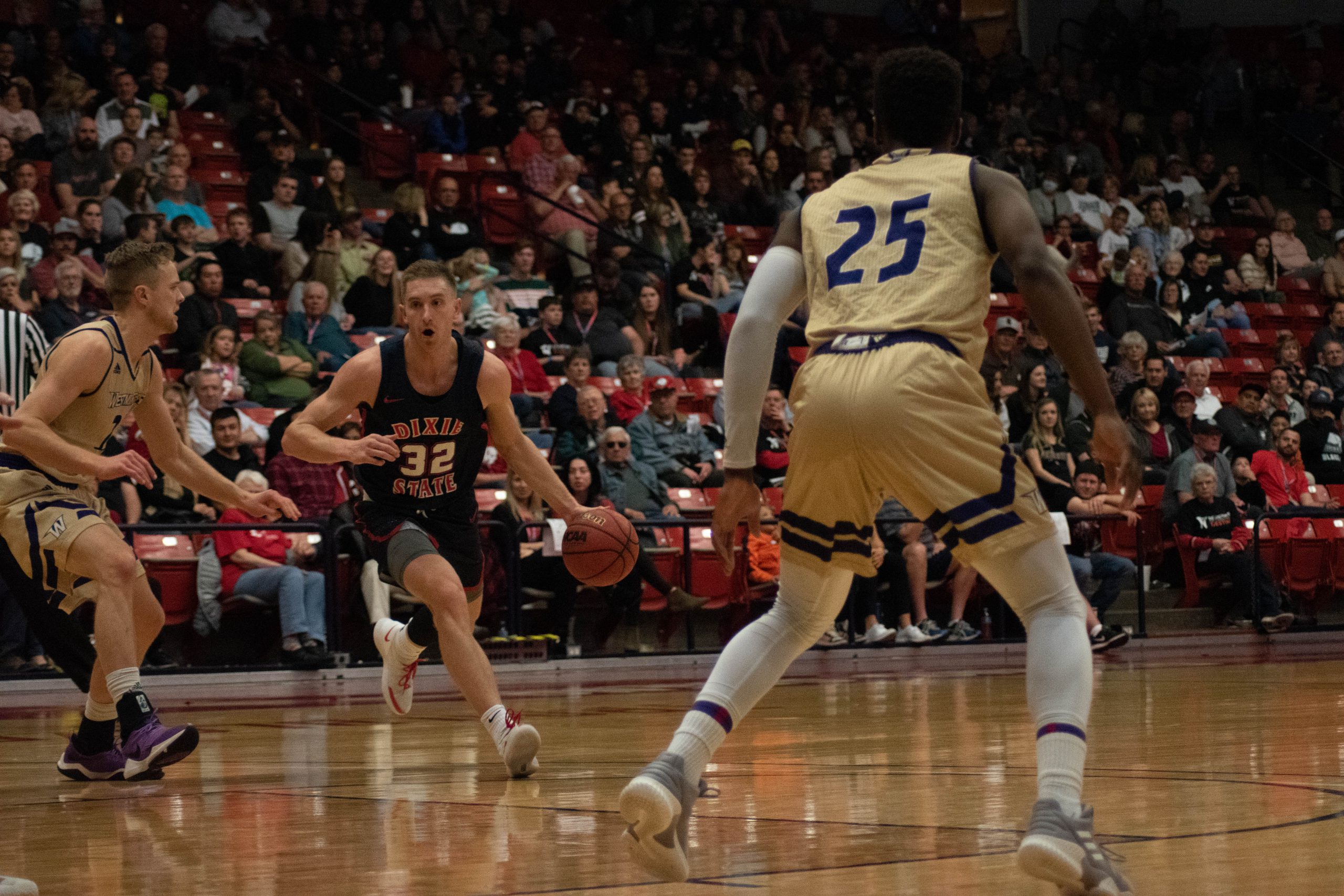 The Dixie State University men’s and women’s basketball teams celebrated senior night and closed out the regular season with a victory at home over Westminster College on Friday.

DSU women’s basketball fought to defeat Westminster for its final game of the season.

The final seconds of the game were intense. Westminster put up two points, cutting DSU’s lead to only one point and making the score 61-60 with 21.9 seconds left of the game. That was Westminster’s final shot. DSU held onto the lead after a foul shot was made by Madi Loftus, a junior biology major from South Jordan, making the score 62-60 with 17.4 seconds left. The final score of the game was 63-60 after another DSU foul shot was made by Lisa VanCampen, a senior biology major from Morgan.

“We finished definitely on a high note, maybe playing our best basketball,” Gustin said. “Westminster is a good team and we had to play well to beat them.”

After the two week mandatory off period, the team will begin spring workouts and start preparing for next season. Gustin said the next step for him as a coach is to continue the recruiting process to make the team the best it could be.

“We signed three really good players, but we need to find some size, some athleticism [and] some rebounding,” Gustin said.

Cameron Mooney, a freshman psychology major from Salt Lake City, put up nine points against Westminster and led the team in rebounds with seven. She said senior night made the night extra special to her.

“As a freshman looking up to those girls, I just love them so much,” Mooney said. “They’re such good leaders, [and] it was just really exciting; the whole week leading up to [this game] was really exciting.”

Mooney said her favorite memory of the season was when her teammate Ali Franks, a junior psychology major from Redding, California, fell on the free throw line.

“Nothing happened, she just leaned a little bit too far and fell; pretty great,” Mooney said.

Mooney said being on DSU women’s basketball taught her a lot about responsibility and growing up. She celebrated the end of the season with her family.

London Pavlica, a freshman nursing major from Las Vegas, accounted for 12 points, the second highest on the team behind Ali Franks, who put up 13 points. Pavlica said being on the team taught her the team’s need for culture and playing together as a team.

“It has taught me to enjoy the process and to take it a step at a time,” Pavlica said. “And [to] not necessarily think about the losses or the wins, but think about why we play this and how basketball is so important in our life.”

DSU men’s basketball wrapped up its season with a 13-game win streak after a home victory over Westminster College, 64-51 on Friday night. The team is now preparing for the RMAC Tournament as the No. 2 seed in the conference.

Head coach Jon Judkins said: “If you would’ve told me that would’ve happened, I would’ve told you you’re crazy. We started 5-8, we were in 14th place, I was like ‘what in the world is going on,’ because I know our guys are better than that, we just weren’t gelling yet. Then all of a sudden these guys came together and started to believe and we just took it one game at a time and there you go.”

Judkins said the defense was strong and the rebounding was good, especially in the second half.

“I think just playing together, getting along [and] sharing the ball [has made this season special],” Judkins said. “I think our guys really bought into it and they’re having fun. When you’re having fun, things go good.”

“We had a rough start, but 13 in a row is huge and now we have the playoffs, so we’re going to keep going,” Pagenkopf said.

Pagenkopf joined two other Trailblazers in double figures with 11 points. He said his favorite part about being on the team is hanging out in the locker room with the guys and meshing when they come out on the court. As for his first NCAA tournament, he said he believes his team will do really well.

“I am excited,” Pagenkopf said. “When it’s tournament time you get a new type of buzz.”

“People take things like this for granted and coming out here and having fun, doing what we needed to do and doing it the way we wanted to do it, made it special,” Ducree said.

Men’s basketball is set to host the No. 7 seed New Mexico Highlands University in the RMAC Tournament quarterfinals on Tuesday night in the M. Anthony Burns Arena. Tickets may be purchased at tickets.dsutix.com.