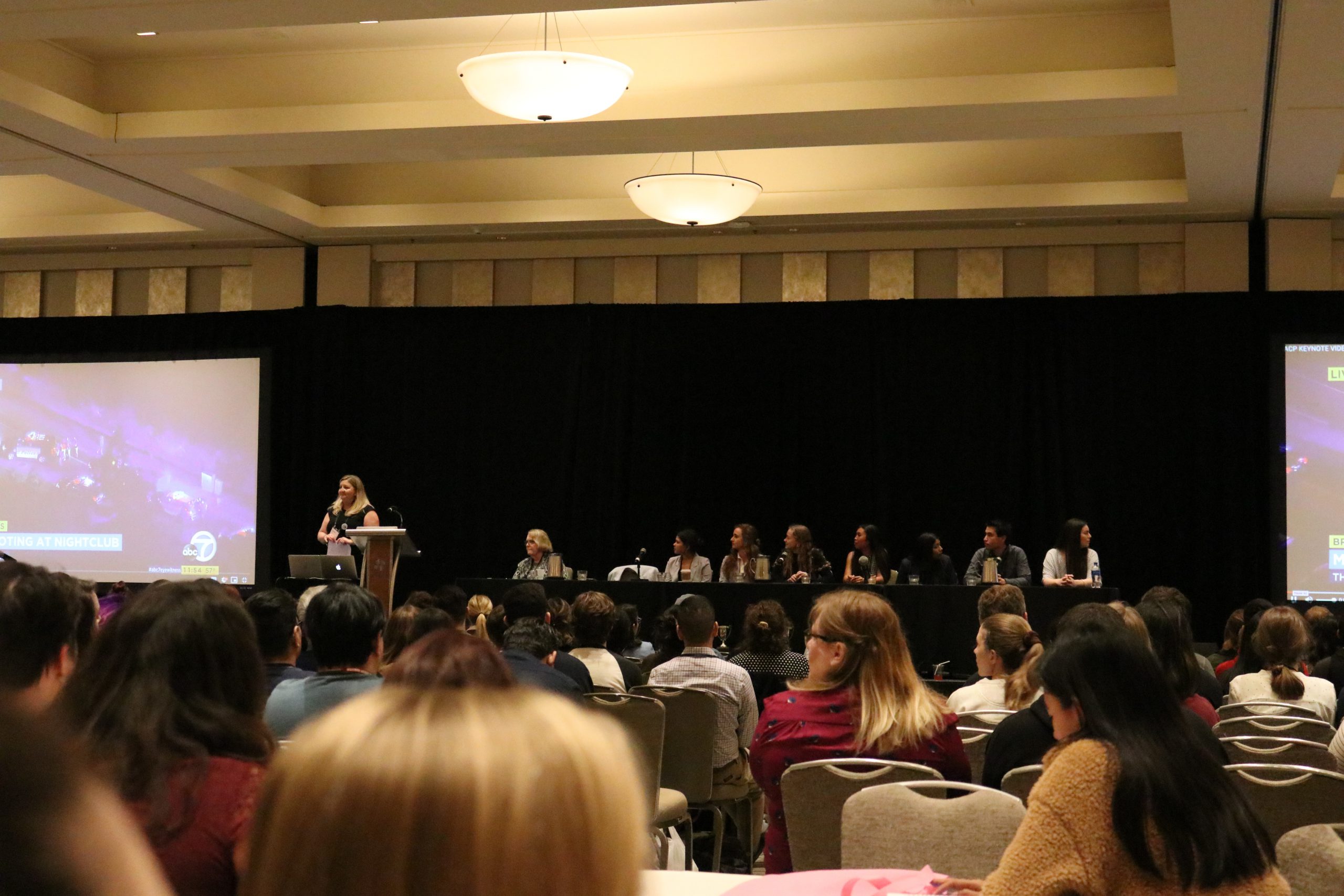 It’s not everyday that student journalists have the opportunity to learn from the nation’s industry leaders and collaborate with other university’s news organizations.

From multimedia journalism and photography to copy editing and in-depth reporting, the students spent 8 hours each day networking with and learning from industry professionals, award-winning student journalists, and other university advisers. The weekly broadcast, the Dixie Sun News at Noon, took home second place in the “Best of Show in Broadcast Program” for the broadcast that aired Jan. 17 during the “Best of Show Awards” on March 2.

Abby Doman, a junior history major from Salt Lake City, is the news editor for the weekly newspaper and website. Doman said she learned the importance of networking not only with those from other universities but also within her own institution.

“It’s important to build rapport with teachers, administrators and other students,” Doman said. “Your reporting will get better if you do this and invite openness.”

Attending conferences like ACP are integral for providing students with outside perspectives, added motivation, and opportunities to get to know each other, she said.

“I have gained so many ideas about how to improve our newsroom I never would have had otherwise,” Doman said. “It is also a bonding experience for our staff. After this trip we are closer and will be able to work better together.”

Doman said she is thankful to the Dixie State University Student Association Senate for helping to fund the trip.

“Journalism is tough work, and meeting other schools who are working in the same field we are is encouraging and inspiring,” Doman said. “I hope we don’t have to fight so hard to learn next time.”

Kelly Seaton, a freshman media studies major from St. George, is the opinion editor and ad manager for the Dixie Sun News. Seaton said her first year at the convention was eye opening.

“I learned just how important college journalism is,” Seaton said. “In a town like St. George, it’s easy to see something like small pickup rates and assume we’re not making an impact. But when you go to these conferences and see how many people are passionate about journalism and reporting, it makes it feel a lot more important.”

Conferences like the one in California are beneficial to students because of the variety of perspectives and experiences they are able to come into contact with, Seaton said.

“Instead of solely getting DSU’s media program, you get all these different professors and speakers from all across the country with their different experiences and ways of doing things,” Seaton said. “It helps (me at least) bring back new ideas of what I think we can incorporate into our papers.”

Reporter Justin Ford, a senior media studies major from Fontana, California, said his biggest take away was the importance of accuracy and always checking the integrity of sources.

“So much information is spread around by so many people, whether they know it’s true or not,” Ford said. “It doesn’t matter if you have three followers or 3 million, everyone is subjected to receiving and sharing fake information.”

Conferences like ACP allow students to meet new people and discover new ways of thinking, Ford said. He said he advises students to get outside of their comfort zones, whether at a convention or while on campus.

Ford said: “Talk to as many people as you can. Everyone is on a different journey and each person can share different knowledge with you that can help you. Finding any new ideas, techniques, advise, etc. is always helpful.”

Noelle Spencer, a senior communication major from Cedar Hills, is the first-year features editor on the Dixie Sun News staff. Conferences help students realize their own potential and give them the confidence they lack, especially when the conference falls around midterm or final exams, she said.

“I learned new skills on how to be a better journalist that will stick with me throughout the course of my college career and my future career,” Spencer said.

Producer Arielle Cabrera, a junior sophomore multimedia journalism major from Flagstaff, Arizona, oversees the weekly broadcast and writes for the weekly paper and website. The conference was not only an opportunity for students to network but also a way for students to brainstorm ideas and discuss the possibilities of success and failure, Cabrera said.

Cabrera said: “I loved meeting writers and videographers from other schools because it helped me find a direction for our newscast and future videos. I was able to collaborate and learn from them in a professional environment.”