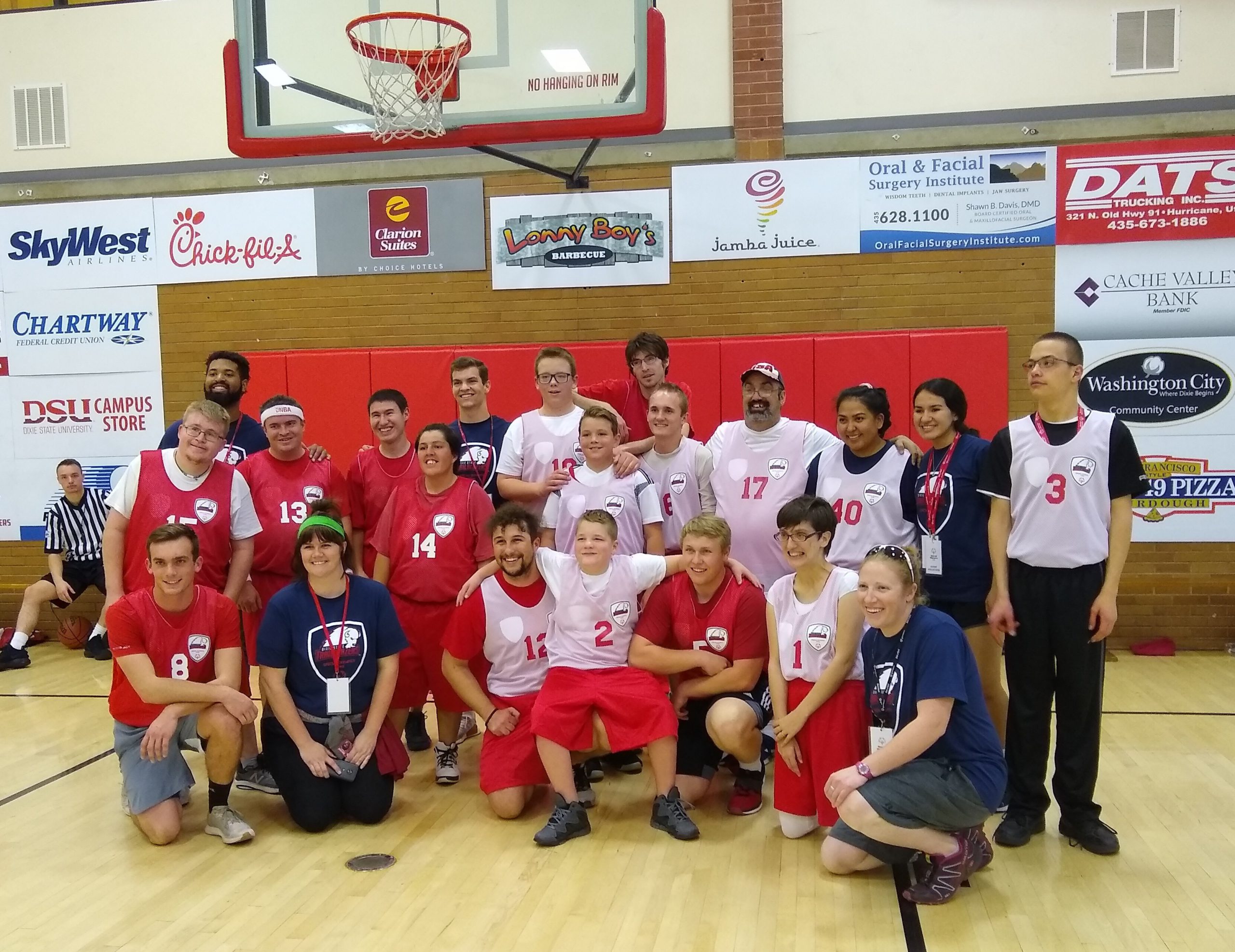 With 313 registered athletes in the southern region of the state of Utah, and Washington County holding the majority of participants, Dixie State University brings a Special Olympics team to its campus.

Susan Hart, health and human performance department chair, said she was elated when Nathan Badell, director of sports programs for Special Olympics Utah, reached out to DSU in an effort to establish a relationship.

In February 2018, Hart made contact with Badell and they began to plan a Special Olympics Track & Field and Swimming meet to be held on the DSU campus that following May.

The HHP department, with support from Campus Recreation and Athletics, provided the facilities and personnel for the event. Volunteers consisted of DSU students, faculty and community members.  The event was followed by a bocce ball tournament in October 2018, and a basketball tournament that was held the end of February 2019. All of these events had well over 100 Special Olympic participants, each of whom were well supported by family, friends and campus and community volunteers.

Hart was able to develop the Special Olympic Trailblazer teams who sport Brooks the Bison and the official red, white and blue DSU colors on their uniforms like every other athletic team on campus.

“I have become involved with this organization first and foremost because I love it, and truly believe in the value of athletic participation for all populations,” Hart said.  “I have personally witnessed the value of sport participation in helping students with special needs develop physical skills, self-esteem, communication skills, friendships, and overall improvement in their quality of life.”

“I enjoy the joy of watching athletes compete and succeed at something that may have not come as easy to them,” Bodine said. “Working with athletes that love to just be active and do their best with a smile on their face, there is nothing else like it. And to watch them walk to the front of a group of peers and be recognized as a champion for their efforts, it is a humbling experience.”

HHP students served as team coaches and unified players who play on teams with Special Olympic athletes. The Trailblazer teams have progressed quickly and did so well at the tournament that two teams qualified to compete in basketball for the State Games that will be held in Salt Lake City March 15 and 16. The two teams took gold and silver in the regional games at DSU.

Karrigan Inae, a junior exercise science major from Riverside, California, said: “This organization is so important to me because growing up with a special needs little brother where he was turned away [from playing] any type of sport was extremely hard to see when all he wanted to do was compete and have fun. But with this organization it focuses on showing off the amazing talents of these great athletes and gives them the opportunity to compete and show off their skills while having fun.”

The next Special Olympics event to be hosted at DSU will be swimming and track and field on May 11. To volunteer, contact April Ficklin, administrative assistant of the Department of Health & Human Performance, at April.Ficklin@dixie.edu or Karyn Wright, community engagement/volunteer coordinator, at Karyn.Wright@dixie.edu.