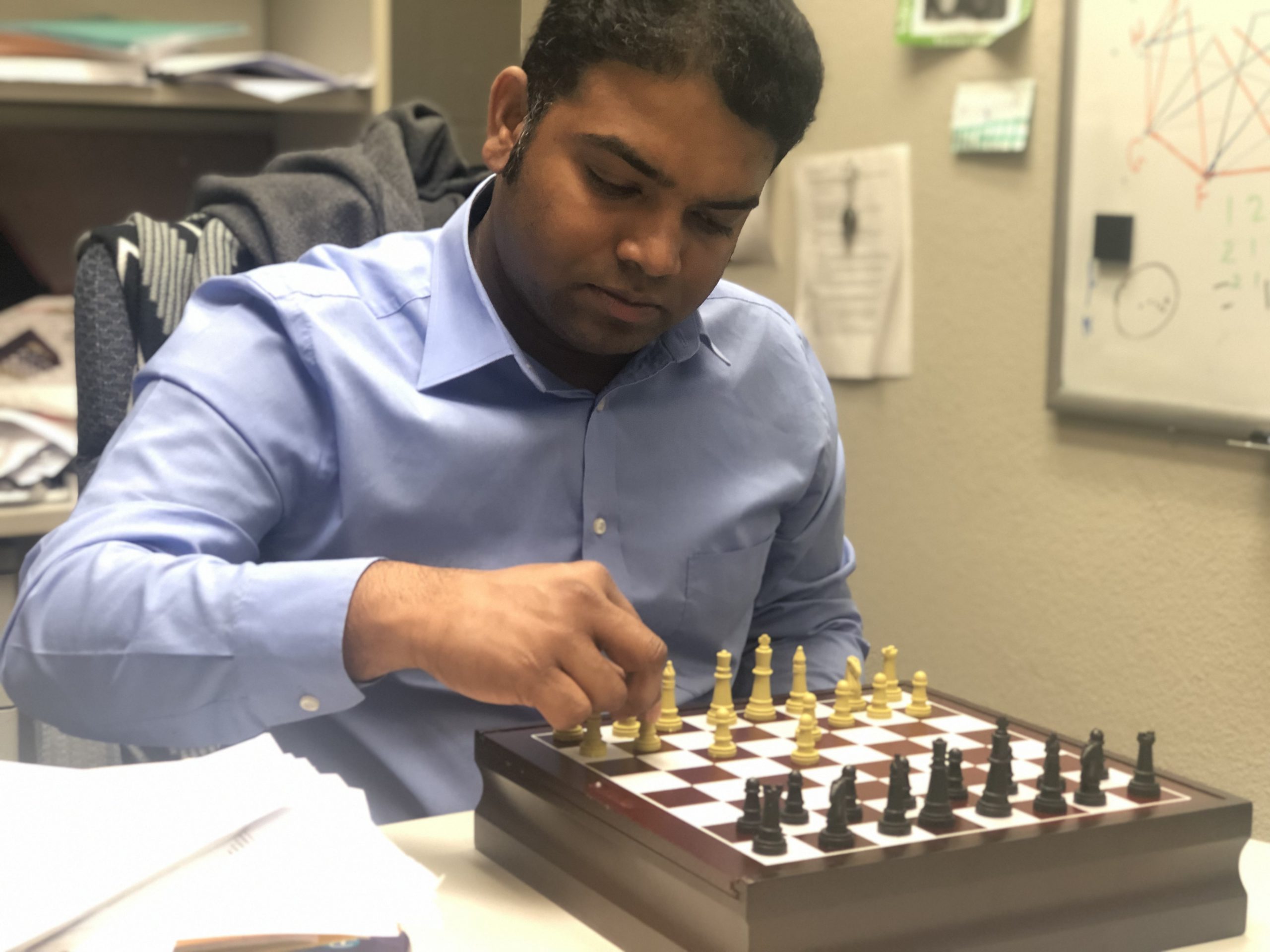 Chellamuthu, an assistant professor of mathematics, is one of six educators across the nation selected for the Project Scholarly Leaders Originating as Practicing Educators Research Fellow program. Project SLOPE is a collaboration between the American Mathematical Association for Two-Year Colleges, Anoka-Ramsey Community College, Florida International University, and Portland State University. The program is also supported by the National Science Foundation.

Rashe Elliot, a senior finance major from Emmett, Idaho, met Chellamuthu during his first semester at Dixie State University. Chellamuthu, who earned his master’s and doctorate degrees from Tulane University in New Orleans, was in his first year teaching at DSU, and Elliot was enrolled in his business calculus course.

“… He was lively and an awesome teacher to have for my first math class,” Elliot said.

He said Chellamuthu is perfect for the SLOPE program, and upon seeing the announcement, he was not surprised. In fact, Elliot thought it was “about time he was recognized for all of his hard work,” he said.

“Chellamuthu has really helped the math department shine,” Elliot said. “He has taken many students to different research events, entered students in different national and worldwide mathematical modeling competitions, and has pushed students to do academic research for publication.”

Each of the six selected educators communicate on an online platform to collaborate until the summer workshop hosted in Portland. Educators selected to participate in Project SLOPE must conduct a study in regard to the relationship between faculty supports and the structures of two-year colleges. They must also “design, implement and evaluate a pilot [Scholarship of Teaching and Learning] program” using AMATYC, according to the Project SLOPE website. In fall 2020, they will present their SoTL project outcomes at the AMATYC Annual Conference in Spokane, Washington.

Chellamuthu said he was surprised when he was selected. He said he plans to research the importance of study skills. Particularly, Chellamuthu said he would like to answer two questions: “how study skills could help mitigate the anxiety level and improve student learning,” and how to remove the “block” students have toward math.

“All [of] our [students] right now are thinking ‘math is hard; math is boring,’” Chellamuthu said. “I want to change that. I want to really change that through my role as a teacher [and] educator in this world.”

While teaching math 1040, he said he began to notice students only thinking of the course as a graduation requirement and not realizing that the lessons learned would be utilized in their majors.

“When I started my job in August 2015, I felt all of my students were just interested in getting the procedures,” Chellamuthu said. “So I thought ‘okay, I need to change this.’”

Chellamuthu said educators should look at classes as less of a chore and more of an advantage.

“Every class meeting is an opportunity to impact students,” he said.

Beginning in fall 2018, Chellamuthu asked his students to take a real-world data set, apply the concepts taught in class to complete an analysis, and create a poster to be presented to the public.

“It came out really well,” he said. “It took a lot of my time, but it was great satisfaction for me.”

Chellamuthu said over the years students will often forget lessons they learned through homework problems in a textbook, but students will remember using real-world applications of the concepts covered in class. Having his multi variable calculus class step on eggs is just one example; Chellamuthu asked his students to grab a family member and have them walk on eggs. The eggs will not break, he said, “it’s math.” Not only will the students remember the experience, he said, but so will the family members.

“No job will say ‘do chapter 10 [starting] from problem five,’” Chellamuthu said. “Nobody is going to give $5,000 just for doing homework problems. They have to apply the knowledge.”

While studying at DSU, Elliot said Chellamuthu has been one of his favorite professors. The professor’s “lively, energetic and enthusiastic” teaching style has left a lasting impression, he said.

“You can tell that he is not only passionate about mathematics, but also passionate about the success and understanding of his students,” Elliot said. “From the classroom to extracurricular competitions and events, Chellamuthu’s main focus is helping students exceed and become better prepared for their future careers and endeavors.”

Weber alumnus Mike Walterman, a DSU math and science tutor, said educators in STEM subjects often perpetuate a large gap between professors and students, but Chellamuthu does not.

“Chellamuthu is one of the rare individuals in [the math] department who genuinely cares about student success, and attempts to bridge that gap,” Walterman said. “I wish him continued success.”

Elliot said Chellamuthu is taking the “active learning, active life” institutional motto and adapting it to fit the mathematics department.

Elliot said, “He is truly a great example of where [DSU] is headed in the future.”