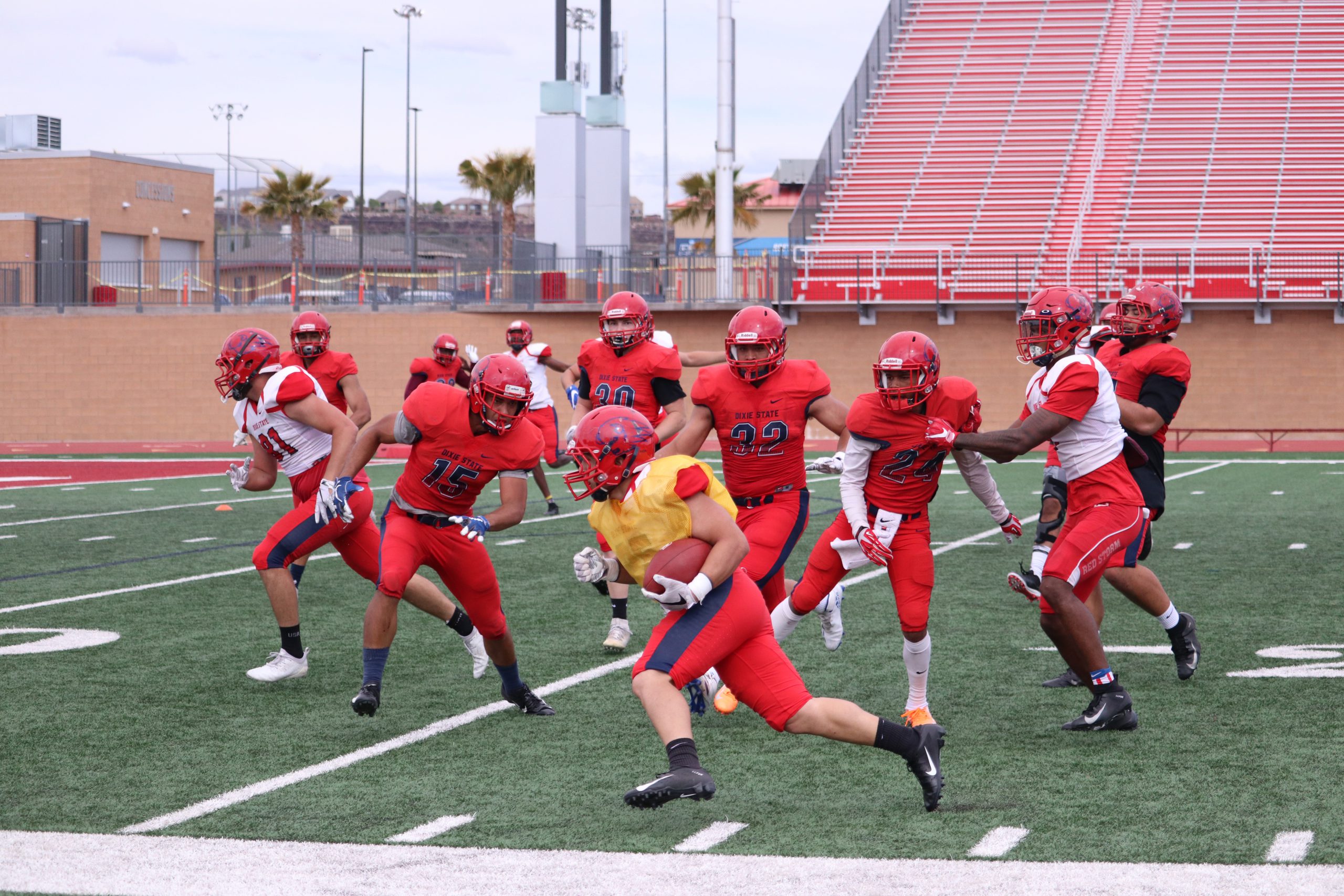 In an effort to help the team finish spring ball strong and push through the difficult time after the passing of fellow teammate and friend, Abraham Reinhardt, the coaches decided to surprise the team with the first team bonding day of the year complete with pizza, ice cream, sand volleyball and corn hole. A day like that is not commonplace in DSU football.

“It was funny because we were just in meetings and I was like man we have to do these walk throughs and then coach Peterson came in and was like ‘I know things [have] been tough especially with Abe,’ and when he said that it was kind of a relief especially with everything going on,” Sei-J Lauago, a junior criminal justice major from Paramount, California, said.

After finding little progress with the team at practice, head coach Paul Peterson said he knew his team needed a day off.

Peterson said: “I felt like when the tragedy happened with Abe we try to move on, that was the message from his dad: ‘Abe would’ve wanted you guys to keep going,’ and we tried and it just felt mechanical like we were just going through the motions, there wasn’t really a lot of progress happening. So I thought we can take a little bit of a day off and just relax and spend some time with each other.”

Peterson said there’s more things than just football and the coaching staff wanted to let the team know they care and give them the opportunity to get to know them better outside of a football setting. Peterson said he looks to do more bonding days with the team during fall camp and hopefully get the chance to go to the lake or up to the mountains where its a little bit cooler to spend more time together.

Lauago said after this experience he felt the competitiveness and seriousness of spring ball again.

Lauago said while he has no personal goals for the upcoming season, his main goal since he became a Trailblazer remains: winning the RMAC championship.

Another change the Trailblazer football coaching staff has implemented into the program is “family groups.” The team has been divided evenly into nine groups among the nine coaches. These family groups allow the players to intermix and get to know coaches and players from the other side of the ball. They have weekly meetings with their family groups in addition to their position meetings. During these meetings the coaches check the athletes academic progress by pulling up Canvas and checking their grades and attendance.

Lauago said while it’s a big change, he thinks it’s great that they have the family groups because he can tell how close they are as a unit when they are off the field.

Tupe said building that relationship and trust with players works hand in hand for communicating with them.

“We have to make it fun for them to have that fire coming everyday to practices,” Tupe said. “There’s always a meaning to the end of it, so its like come out here, work hard, at the end you’ll be rewarded for the things that you put onto the field.”

As for the progression of spring ball, Tupe said it is going a lot better than they had originally anticipated.

Tupe said: “It’s a lot better than we expected with the bodies that we have [and] with the relationship these kids are having amongst each other. I think its going well, we just have to keep working staying in the playbook, just learning each day and I think that’s the best part about the game of football. You can fix things everyday. There’s always a new day that you can come out and work on your alignment, assignment, your technique, so that’s the great thing about football, there’s another day to get better.”

The Trailblazers have their annual spring game April 13th at 1 p.m. at Trailblazer Stadium.