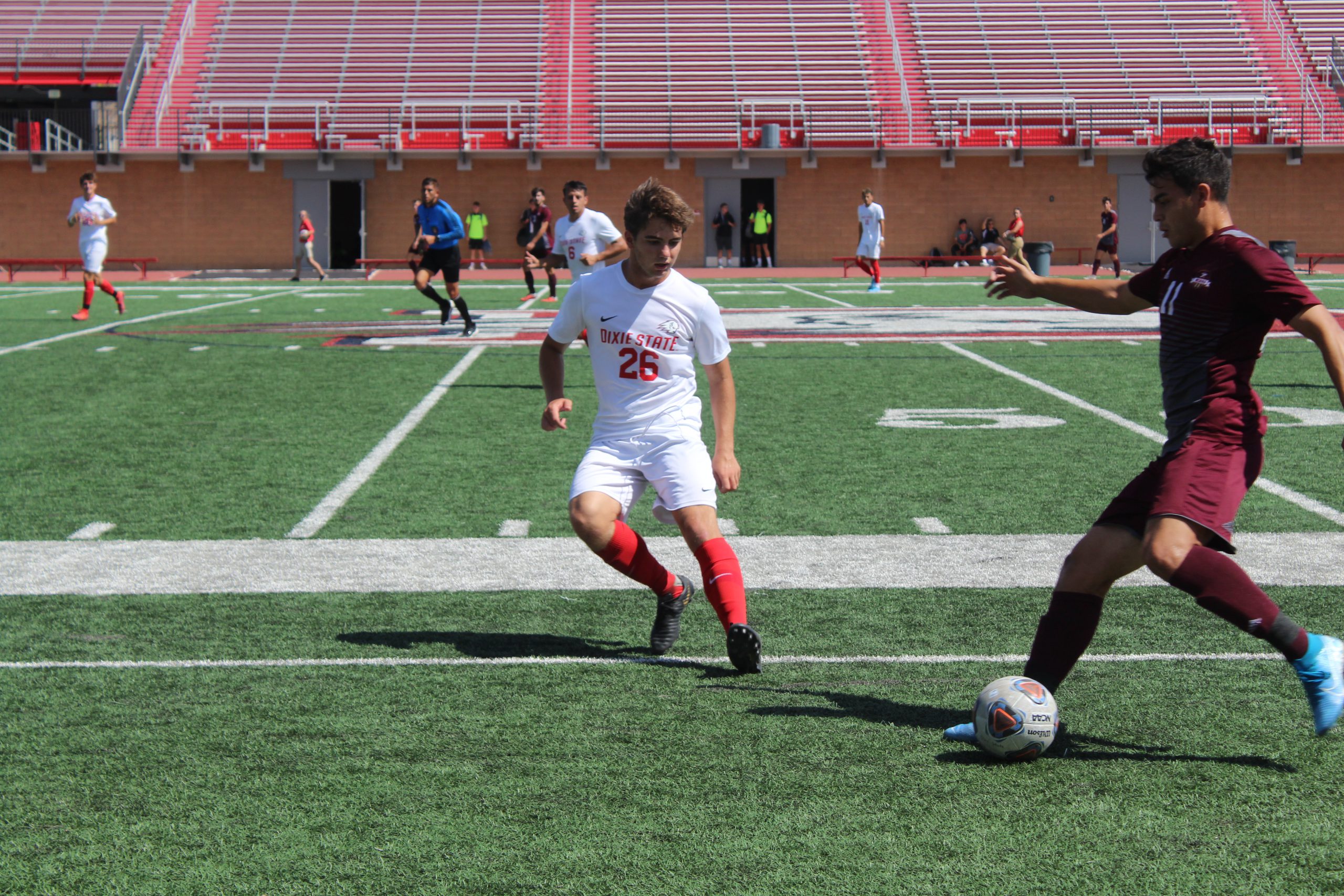 Carson Ecalono, a freshman psychology major from Lindon, goes up for a corner kick against the opposing team. The Trailblazers have a record of 1-2-1 last playing against Texas A&M International with the final score a 1-1 draw.Photo by Madison Boyd

The Dixie State University men’s soccer team will have in-state rival Westminster College as its first conference game of the season.

With preseason games now in the books, men’s soccer head coach Jonny Broadhead said these preseason games help the team prepare for WCSL and the Rocky Mountain Athletic Conference by getting exposed to and playing against teams with different style of play.

Broadhead said: “[We] go to Texas last weekend and play Midwestern State and Dallas Baptist, [we] play a different player and personal. You iron out all the wrinkles, seeing all different styles and seeing what you get exposed on knowing what we saw with the RMAC last year. We have to iron things out and we’ll be ready to go.”

WCSL will come into the matchup against DSU 2-2 on the season previously losing to Eastern New Mexico by a final score of 1-2.

The Trailblazers have a record of 1-2-1 last playing against Texas A&M International with the final score a 1-1 draw. Defender Matt Lockwood, sophomore biology major from West Jordan scored DSU’s only goal in the game in the 76’ minute with the assist from midfielder Carson Ecalono, freshman psychology major from Lindon.

To succeed in defeating WCSL, Broadhead said that the team needs to get a good start in the game with getting goals early and icing the game to put WCSL away.

“Going into conference and giving us another week to perfect our form, I’m honestly not worried and we’re going to turn a lot of heads this year,” said Lockwood.

Goalkeeper Zach Nielson, redshirt senior criminal justice major from West Point said that he’s excited for the in-state rivalry game against WCSL and believes that there is momentum for the DSU men’s soccer team going into the game.

Nielson said: “Last year we tied and lost to them so we’re looking to bounce back this year and show them we’re a different team. We have been nothing but upward motion with our play and we’re more than fired up for it.”

The DSU men’s soccer team will play WCSL on Friday Sept. 20 at Trailblazer Stadium at 7:30 p.m.