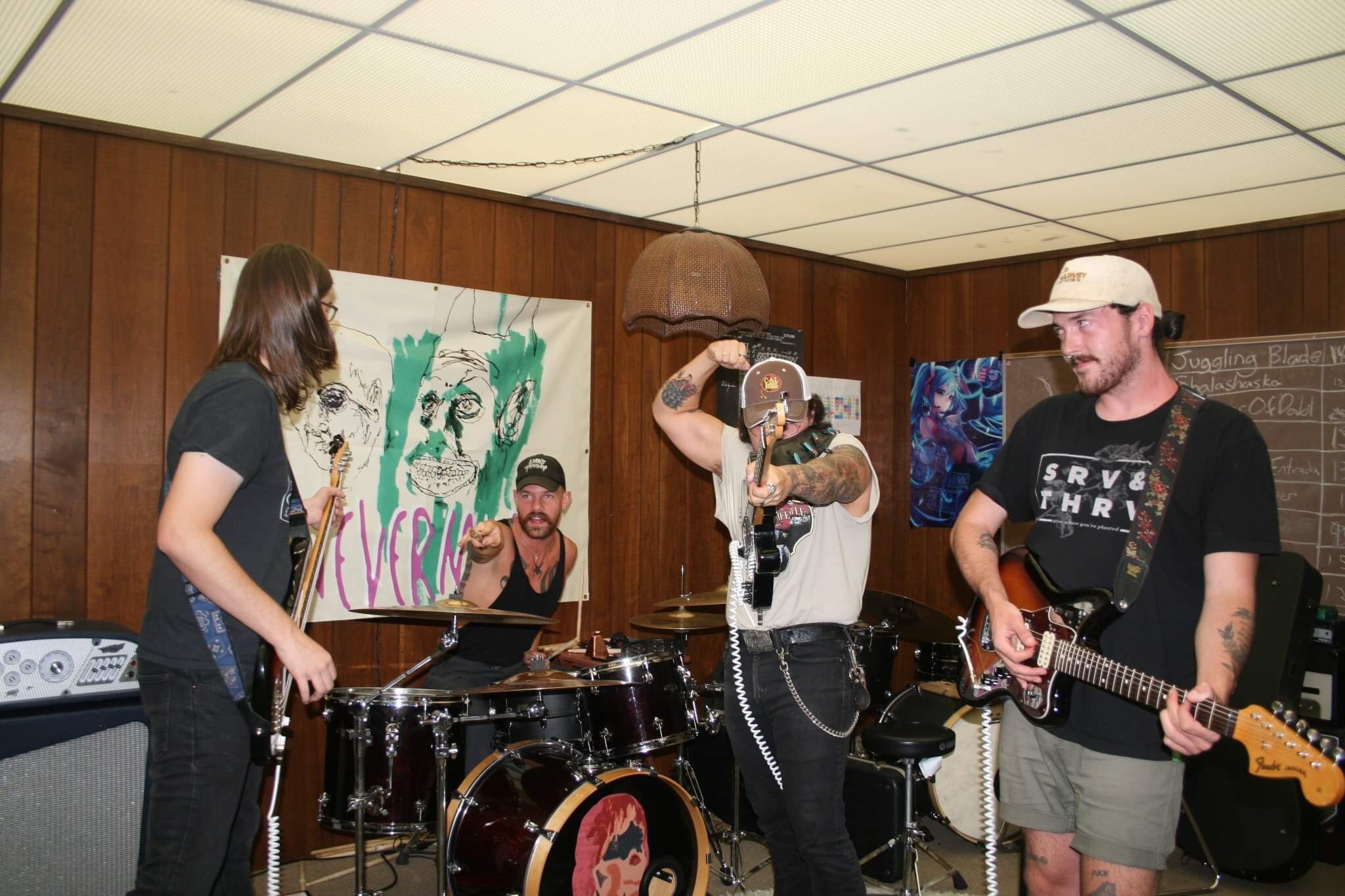 The NVM band practices their set for the upcoming Music Revolution Fest that they will be playing at. The band is releasing a new album soon with a new style of music that they have not yet tried, and are excited to see what their fans think. Photo by Jessica Johnson

Among the students and faculty at DSU, there are four groups that are making their way in the local music scene.

These bands include the NVM band, Three Day Weekend, Keepers of the Earth Peace Music Revolution and South West Rambo. The bands will be performing at the Music Revolution Fest at the DSU Fountain Amphitheater on Oct. 10 from 7-10 p.m. Admission is free to students and the community.

Their band was formed in October 2016 when Mariano and Johnson met at the campus coffee shop and immediately clicked after realizing they had the same taste in music. Mariano and Johnson had the idea to start the band together and have since created a solid group.

“Music has affected my life because it has tested my personal capabilities, my creativeness and has led me to achieve so much I never thought possible,” Mariano said.

The band’s music style thus far has consisted of screamo and more aggressive music, but the band recently decided to transition their content to a slower and calmer sound for the next album coming out. The album will have 10 songs on it and is currently being mixed by their producer. Mariano said the album, “Thermal Memory,” will be ready to drop within the next few months. When the launch date gets closer the band will release more information on where to find it.

“We have worked really hard and spent two weeks in Colorado giving it our all every day in the studio, and have changed our sound in a lot of ways,” Mariano said. “To us, we are currently living a dream with the band with every new fan and gig we play that’s the current dream we have built years and years to see.”

South West Rambo is a trio consisting of Jordan Trumble, the singer and mix engineer; Octavio Lacayo, who produces and plays multiple instruments; and Bassist Colten Lomenick. The band joined together in 2015 after Lacayo and Trumble met on a production forum and collaborated on songs. Their style of music varies from R&B, pop, lofi and old-school hip hop.

The band has been a large facet of personal growth for each of them and they continually grow musically and as a band, Trumble said. Their music improves each year and they gain a deeper understanding of themselves and each other.

“It’s a lot of character building and a healing process,” Lacayo said.

South West Rambo has played about seven shows in southern Utah and they are always looking for more opportunities to share their work.

This gypsy band has members who come and go, but two constants are Michael Hoyt, a junior graphic design major from Salt Lake, and his father Jeffery Hoyt, assistant vice president for student success at DSU. The start of the band was this father and son duo; they have been playing together since Michael first learned how to play guitar 11 years ago.

The current other members are Jaromy Barker, who plays drums; Tim Tiffany, who is the second bass player; and Joel Bradford, the second drummer. Jeffery Hoyt does vocals, bass and synth. Michael Hoyt is the lead guitarist and does synth work as well.

Their music style is Art Rock because it relies more on the atmosphere rather than popular genres, Michael Hoyt said. This summer the band played with a drummer, recorded an album at Spiritual Recording that sounded so good that they have continued and they have produced seven albums since.

“[The band’s intention with music is to] explore all the facets of the human experience,” Michael Hoyt said.

Michael Hoyt said music has affected each of the band members’ lives deeply; music has been therapy for them, and a powerful tool for self-expression.

Three Day Weekend has been a band for about three years and the members have spent most of their time writing and playing local shows. The band consists of Allen, a guitar and Vox player who works in the DSU IT program and is from St. George; Khouri Hutter, a sophomore business administration major from Ganado, Arizona, who also plays bass; and Mari Ericksen, a sophomore music performance major from St. George, who plays drums.

Allen said: “Musically, the philosophy boils down to trying to write pop songs that don’t do the things I really hate about pop music; [I] just want to steer away from shallow textures. Our lyrics are purposefully vague and usually have a few meanings baked into the language to help people make their own associations.”

During performances the band wears costumes and gimmicks to just try and help people let go during their performance.

Ericksen said: “Music has always been the center of life. I grew up in a musical home where I started playing instruments at a very young age and I honestly don’t know who I would be without it.”

The band’s style of music is centered around wanting listeners to let go of their anxiety and just have fun.

Hutter said, “Playing my bass helps me relax and playing a show with our fans is a different kind of high.”

“After that we are looking to get out and play anywhere our fans want us,” Allen said.

Check out each of these bands on YouTube or Spotify and come watch them perform live.