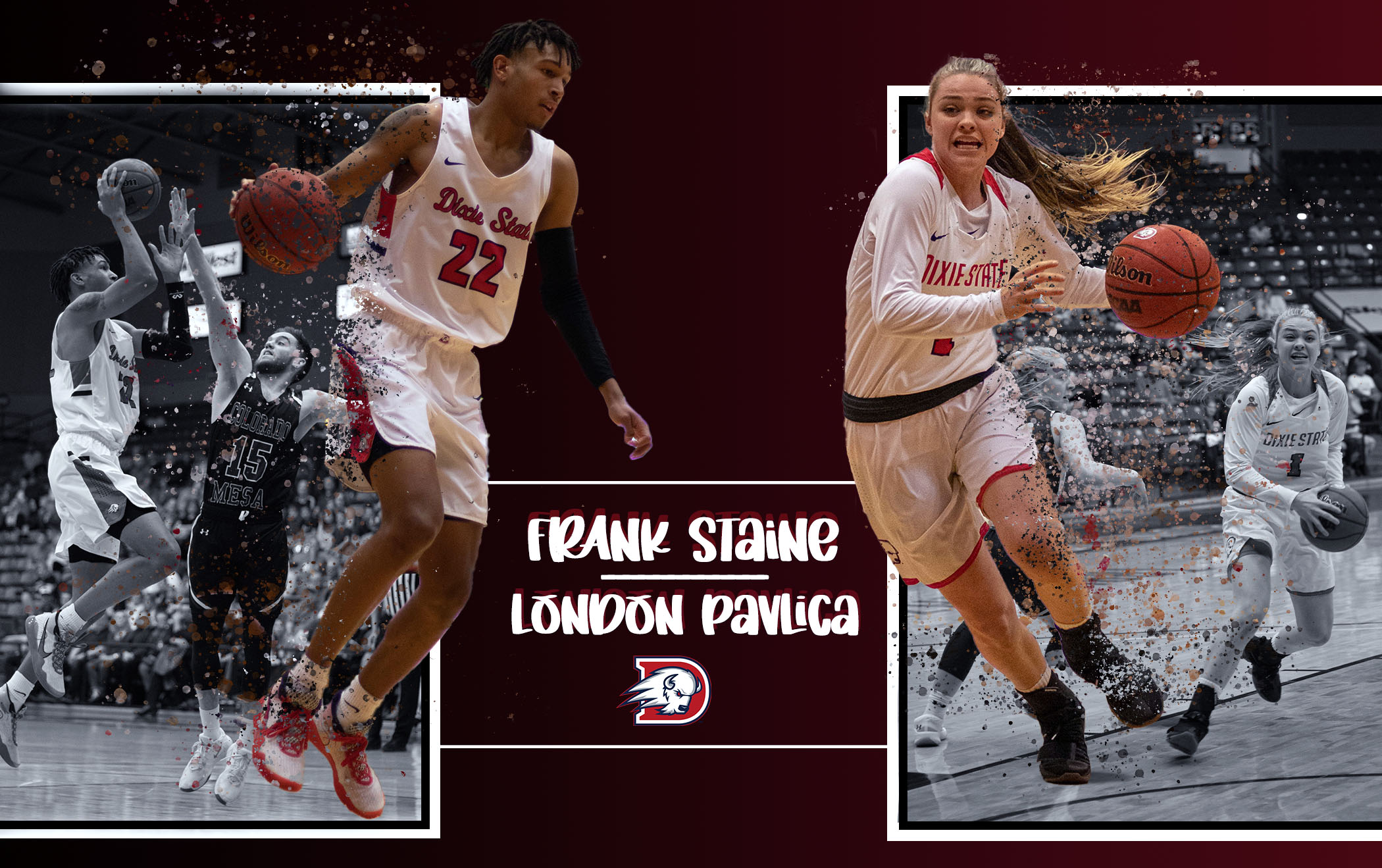 Frank Staine, a sophomore finance major from Inglewood, California, and London Pavlica, a junior nursing major from Las Vegas, gear up for the upcoming season. The teams are taking a look into their competition for the new conference they are competing in. Photo illustration by Breanna Biorato.

We’re roughly a month away from seeing Dixie State University’s men’s and women’s basketball teams begin their Division I era on Nov. 25.

Both programs are thrilled to have the opportunity to compete soon and play teams who are at a higher level in the Western Athletic Conference.

Guard Dason Youngblood, a senior communication studies major from South Jordan, said having basketball in the community is a big deal because it’ll be something fun to have everyone rally behind and cheer for since there haven’t been sports going on at DSU.

Women’s head coach JD Gustin said the transition to DI is a fun and stirring opportunity to face the challenges the WAC presents with a different level of competition.

“Our goal is to simply be as competitive as we can be and get the most out of our team,” Gustin said.

Men’s head coach Jon Judkins said the WAC is a great conference for competition, and the team knows it has its hands full because of the size difference compared to the other men’s basketball programs.

Judkins said: “Their bigs are bigger, stronger and faster. I think guard-wise it’s pretty close. I think we have some talented guards and I think our guards can match up with that. We’ve got to get out there and play and see what adjustments we have to make, but we’re preparing, getting our guys in shape, and we’re trying to get them stronger. We’re doing all these things we can to be competitive in the WAC.”

Let’s get to know the other basketball teams in the WAC:

The chart above includes the teams the Trailblazers will face off with and how they did last season. Besides New Mexico State University running away with the conference for men’s basketball, any team standing in the No. 2 – No. 6 places is going have to earn its spot if they’re thinking about being in competition for the WAC title.

Each program has its own way of coming away with victories. For example, California Baptist University is a great all-around team offensively and defensively. The Lancers lead the way in scoring offense with 2,465 points, and they were great at holding their opponents at a .418 shooting percentage. University of Texas Rio Grande Valley led the conference in assists and steals to create opportunities on offense, which lead to its 2,189 points overall.

DSU has to be locked in on both sides of the court if it’s going to surpass that 23-win mark like it almost did last season.

Women’s basketball is in the same situation, except no one is running away with the conference. From top to bottom at No. 2 – No. 8, any of these programs could be the new WAC champion.

Grand Canyon University was a great defensive team last season, leading to its second-place finish; the Lopes were No. 1 in scoring defense and denying buckets with 110 blocks. Another example is CBU, which can be under-looked because of what its record shows. The Lancers were outstanding offensively by leading the WAC in scoring offense, three-point percentage and assists.

The door is open for the Trailblazers to make a name for themselves in the WAC.

The teams to beat

The obvious candidate for who to take down in men’s basketball is NMSU. The Aggies have been on top of the WAC for the past six out of the seven years dating back to the 2013-14 season. Although NMSU is the iron giant to knock out, the Trailblazers agree Utah Valley University is the main target to beat since they’re in-state. So, a definite rivalry is in the making between DSU and the Wolverines.

Another no brainer for women’s basketball is UVU being the team to beat.

Guard Keslee Stevenson, a senior exercise science major from Willard, and guard London Pavlica, a junior nursing major from Las Vegas, both know how important this game is with the Wolverines since eight teammates including Stevenson are from Utah and facing some familiar faces from high school.

Stevenson and Pavlica said they both want to compete with UVU and earn bragging rights for this new in-state rivalry.

Keeping a step ahead of Tarleton

Both DSU programs don’t know TSU that well; however, Youngblood said he thinks it will be fun to see how the two programs compare with one another to see who makes more progress with the transition to DI.

Forward Frank Staine, a sophomore finance major from Inglewood, California, said whoever makes the adjustment quicker and better to get victories in the WAC will have more success.

Stevenson said she is intrigued about how two DII programs are making the move to DI and they’re going into the WAC as the underdogs.

“We’re here to battle, we’re going to show everyone what we have, and I’m really excited to be in that journey,” Stevenson said.

Overall, it’s a jump ball to see who takes home the crown of being conference champion in the WAC, and it’s a matter of who’s going to out-duel who for what spot in the standings.