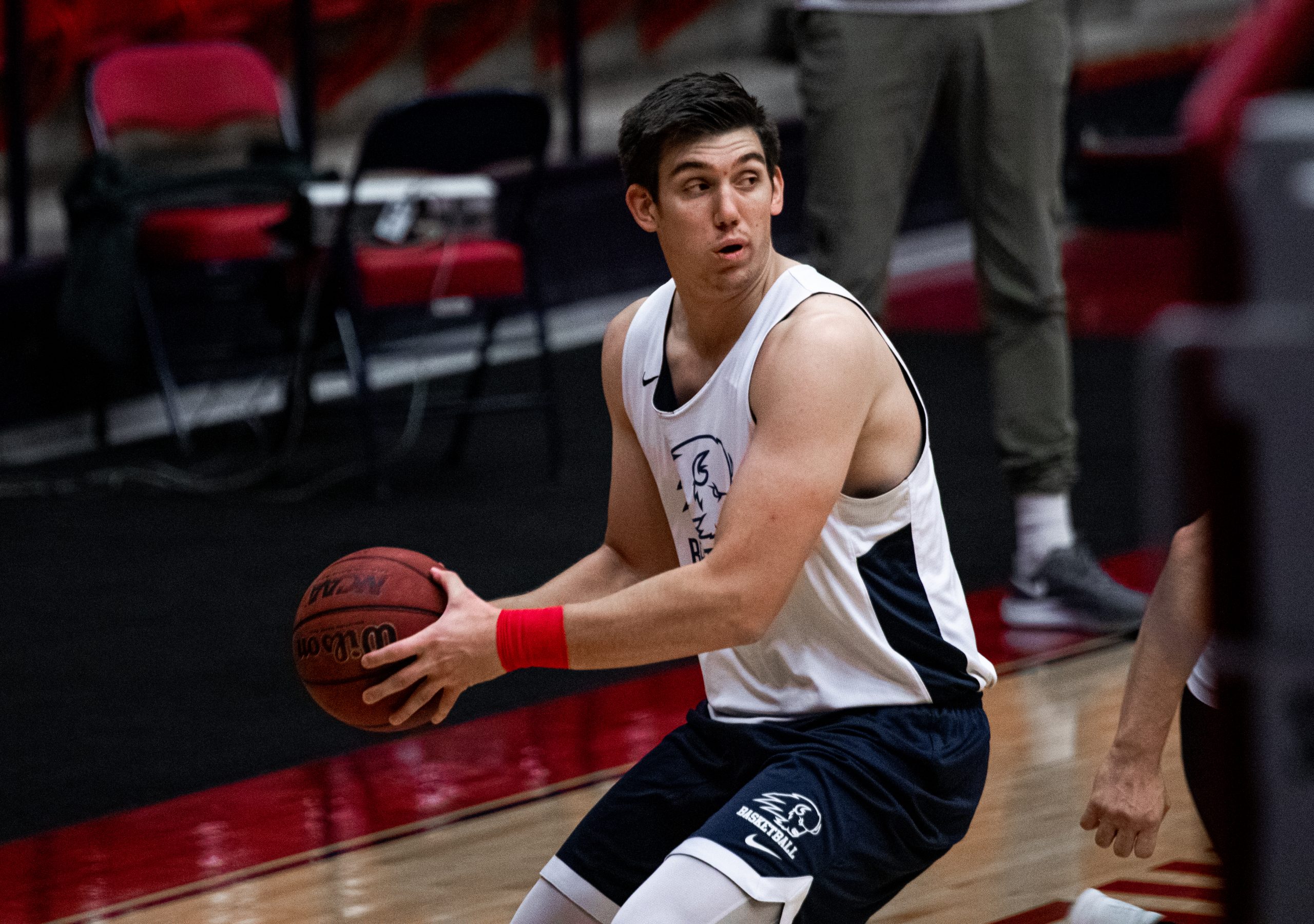 Jarod Greene, a senior business administration major from Blackfoot, Idaho, trains with his team before the start of the season on Oct. 22. Women’s and men’s basketball players are ready to take on top-dog universities to prepare for high-level, tough environments. Photo by Breanna Biorato.

Head coach Jon Judkins said he thinks the full schedule is good, and the main thing his team is thrilled for is the Western Athletic Conference allowing DSU and other basketball programs to play.

“[We’ll] see what this first year of DI [is like and] to see where we’re at, what we need to get better at, and [our schedule] could be a good thing for us,” Judkins said.

Assistant coach Andrew May assembled the full schedule for the team. He said the Trailblazers want to play the best teams and get the schedule as high-level as possible to prepare to play in the toughest environments.

May said: “We definitely want to make sure our guys are prepared and ready for the WAC, so definitely finding teams like Gonzaga playing in their environment, playing at Utah State, things like that were part of the consideration. [I want to make] sure our guys get an experience that’s going to help prepare us when it’s league and [prepare them for] the rest of their careers.”

The two games May is happy about in particular are WSU and SUU. May said the Wildcats are one of the big-name schools in Utah, and to have WSU come to the Burns Arena is a big deal for year one in DI. The Thunderbirds are about an hour away from St. George and this matchup has potential to start a new in-state rivalry, and it’s a great opportunity for both programs to compete against each other.

Judkins said he’s looking forward to the USU game because it’s his alma mater, where he played collegiately, and he thinks it would be fun to go back and play them in a game.

May said having certain teams at home versus away is a big advantage because, COVID-19 circumstances allowing, DSU’s fans can play a huge role when playing difficult teams like NMSU and Grand Canyon University at the Burns Arena. If the Trailblazers were to play the Aggies and the Lopes on the road, it would be more difficult because both teams have great fanbases, which can set the tone for the challenge of that matchup.

Women’s basketball was supposed to play Life Pacific to make its DI debut, but the Warriors canceled all their non-conference games due to a trend of COVID-19 cases in the community. So, the Trailblazers will start their season at home against Brigham Young University on Dec. 1. DSU notable non-conference road games feature the University of Nevada Las Vegas on Dec. 16 and SUU on Dec. 21. The Trailblazers will be on the road to begin conference play against NMSU on Jan. 8-9 for a doubleheader.

Head coach J.D. Gustin said the first-year DI schedule came out great, and the games he’s particularly happy about are BYU, UNLV, and SUU because those games can help prepare the team for conference play.

Both Judkins and Gustin agree that traveling will be a challenge for their teams. The WAC was originally going to schedule conference games by keeping the doubleheaders, but games would be on Thursday and Saturday. However, fellow WAC athletic directors and presidents voted to have games on Friday and Saturday because they thought that would be better suited for the athletes. That’s not the case for Judkins and Gustin. Both coaches said usually Sundays would be the team’s day off to rest and relax, but with the new schedule, both programs will have to travel home on a Sunday, and they don’t get the extra day of rest needed.

By not knowing what to expect from the rest of the WAC, making adjustments can be a challenge coaching-wise.

Gustin said there’s not going to be an opportunity to make too big of adjustments when playing the same teams on back to back days.

“I think we’ll be fine; we’ll figure it out,” Gustin said. “We’re grateful to play and that’s the attitude we’re going to bring, and we’ll see what happens from there.”

The preseason polls were released on Oct. 27 and the media and WAC coaches voted what teams were placed where in the conference.

Judkins said the low rankings were expected, but it does add fuel to the flame to motivate his team to prove the critics wrong.

Judkins said: “We’re going to use that as fuel for our guys and say, ‘You know this is where they thought you guys will be. Let’s go prove them wrong.’ To me it doesn’t matter where you start the season, it’s where you end the season. So, that’s what we’re going to focus on, but we expected that and we understand why. We hope we can turn some heads and change that.”

Women’s basketball was voted by the media and WAC coaches to finish No. 8 out of nine in the conference.

Gustin said his team is not staggered by the results, but the Trailblazers are trying to be as competitive as they can be, regardless if they’re first or last.

Overall, it should be an interesting first DI season for both programs and a lot of games to look forward to with the big-name and in-state schools. You can find full schedules for both men’s and women’s basketball on the Dixie State Athletics website.