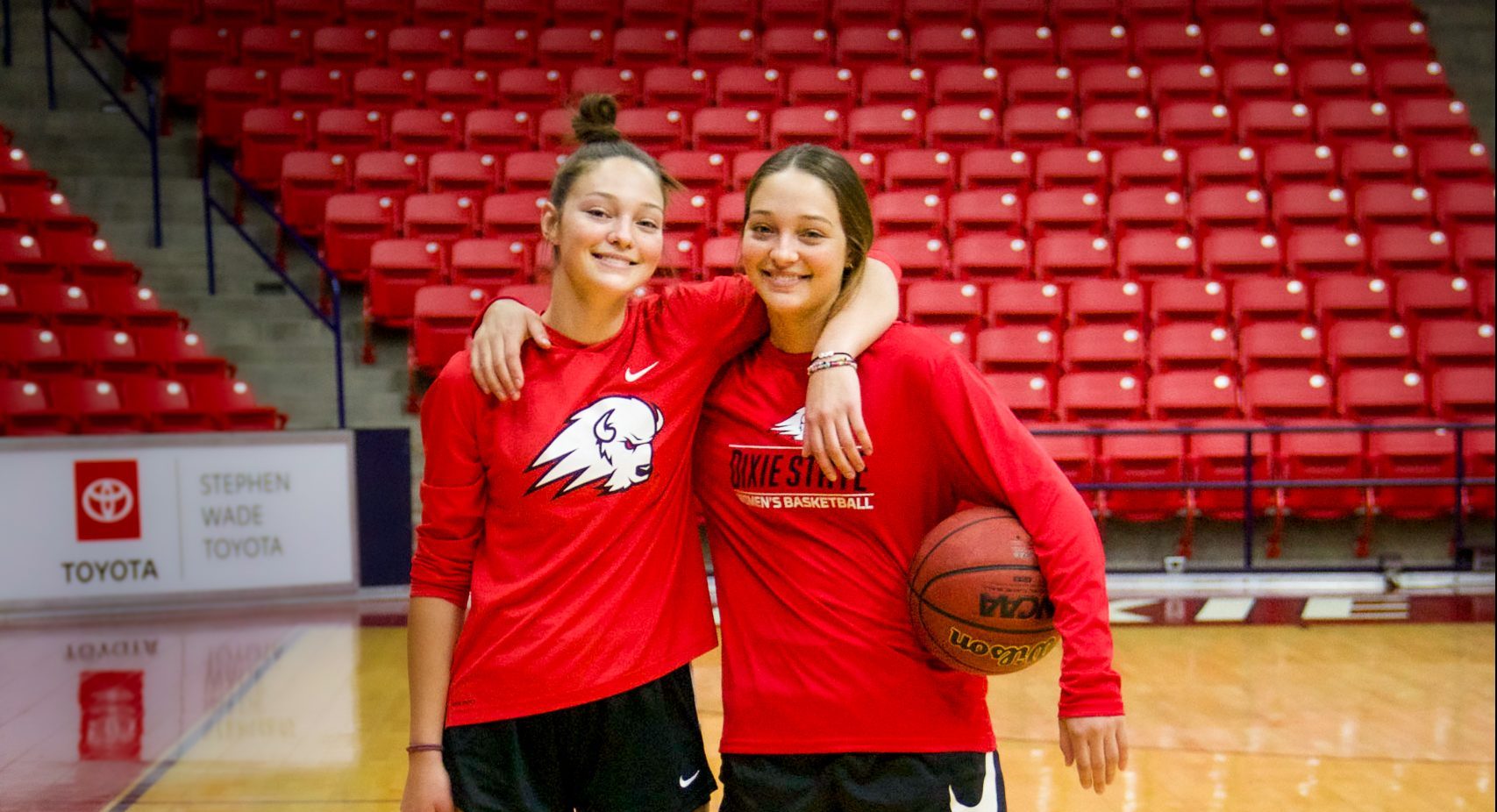 The Dixie State University women’s basketball team is no stranger to adversity.

Over the last season for DSU women’s basketball, twins Maddie and Macie Warren brought a unique addition to the team’s chemistry.

The dynamic of the sisters’ relationship on the court has been a strong and reliable one since they first picked up the ball in fifth grade. During games, the twins read each other, anticipated each other’s moves and motivated each other, until their last preseason game in December 2021.

During that preseason game, Maddie attempted a layup, but she hit the ground with a torn ACL, unable to finish the game or the 2021-22 season.

This was the first time in their lives the Warren sisters were separated in their sport. When Macie hit the court for the first time without her sister, it was an emotional challenge for both of them.

“It was the second quarter against Southern Utah University in our 11th game, Maddie was driving to the basket, she had the ball, she planted wrong and her knee gave out,” Gustin said. “We tried to help Macie finish the game, but when Maddie was hurt and was down, Macie was basically finished as well… Macie was devastated.”

Gustin said although team practices include ligament injury prevention exercises, this type of injury can still occur. Maddie’s injury affected not only her but Macie’s gameplay and attitude as well.

Macie said it was a challenge to stay driven without her sister by her side.

“I’ve never played a game or gone to practice without Maddie in my life,” Macie said. “I went to practice for the first time without her and she wasn’t there to be my partner so it was really emotional… Basketball wasn’t the same without her.”

Macie not only struggled with adjusting to a new team dynamic she wasn’t used to, but with seeing her sister on the sidelines.

“Basketball has been my life since I started playing and I’ve played almost every single day,” Maddie said. “One of the hardest things is not being able to play at all.”

Maddie said she could tell her absence overwhelmed Macie at first, but she is proud of how Macie has adapted.

“At first I was just going through the motions and I was feeling really down and unmotivated,” Macie said. “After a few weeks, I realized that I was playing for [Maddie], and I began to play harder because she couldn’t.”

Macie said her sister’s injury was not only a new challenge for herself but for the rest of the team as well.

“Maddie was one of our point guards and she plays with a lot of tempo and pace, so it was hard at first,” Macie said. “Maddie has always brought a lot of energy, communication and focus to the team.”

Gustin said one of the greatest things about coaching is the lessons that come along when the team faces an obstacle. He said he is happy with the way the team, and Maddie, have handled the situation.

“It was really a test of patience, a test of perseverance and a test of character,” Gustin said. “Maddie and Macie have really done an amazing job with all of this.”

Gustin said he’s proud of the sisters and the whole team for playing well and adjusting to change. He said he looks forward to having Maddie back on the court and coaching the twins as a pair once again.

While she recovers, Maddie said she looks forward to cheering her team on, supporting her sister, and maintaining a positive attitude.

“Now I won’t take the team for granted, I won’t take my body for granted and I have a new appreciation for the game,” Maddie said. “Our team has faced a lot of adversity, but it’s made our team stronger and more ready for anything.”