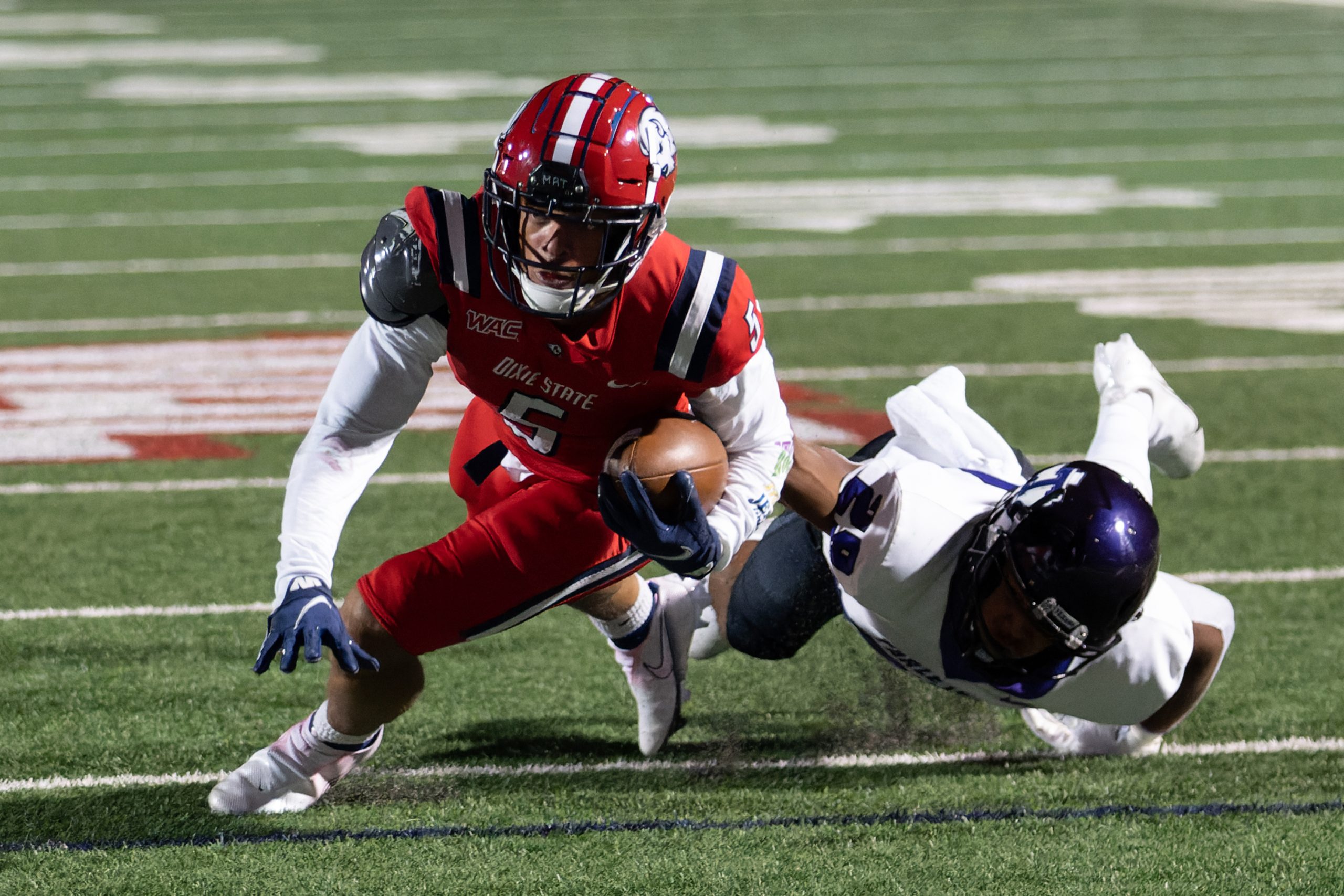 Keith Davis, a junior management major from San Diego, California, is a multi-sport athlete competing in both football in the fall and baseball in the spring. Photo Credit – Alex Santiago/DSU UMAC.

Keith Davis, a junior management major from San Diego, California, shows his passion for athletics in his college career as a multi-sport athlete playing both football and baseball.

Davis is a strong asset for the Dixie State University football team in the fall as a wide receiver. This 6’1″, 190-pound athlete strives to work hard and continuously improve while keeping up with both sports and academics.

Before competing in athletics at DSU, Davis previously attended and participated in football as a wide receiver at Arizona State University for two years. DSU football head coach Paul Peterson recognized Davis in his time at ASU.

“When he came on the portal he was definitely someone we wanted to take a look at,” Peterson said. “It became a good fit for both of us.”

Peterson was surprised when he got the news Davis is a multi-sport athlete and played baseball as well. Specifically, this is something Peterson looks for in athletes when recruiting for the team.

“We recruit multi-sport athletes because it shows leadership, toughness and athleticism,” Peterson said. “It’s really just a bonus for us.”

Peterson said he noticed Davis’ strengths both on and off the field, as he is “super athletic, fast, a great teammate and leader, conscientious, and also does what he is supposed to in the classroom.”

Davis manages his time well to perform at his best ability by always putting his schoolwork first, and ensuring he has time to focus fully on his sports. Part of being a busy multi-sport student-athlete is getting a good amount of sleep into his schedule.

“I try to get my school work done first and early so I have more time later on, so then I can also get some sleep,” Davis said.

When Davis finally finds free time in his busy schedule, he likes to hang out with his five roommates on the football team, play video games, and watch his favorite show “Ozark” on Netflix.

Springtime is more difficult for Davis because he is balancing school, baseball and football all at the same time. Keith will finish up the season with baseball, then jump right back into football as they finish spring training.

“Spring semester is a little harder academic-wise, and it comes into conflict when I am always on the road for three or four days,” Davis said. “Other than that it is pretty smooth.”

In the spring, Davis competes on the DSU baseball team as an outfielder. Davis got the first hit of the year, drove in the first run at DSU, and has shown nothing but his will and passion to be on the team.

DSU head baseball coach Chris Pfatenhauer gave Davis a tryout and was impressed. Pfatenhauer said he is a great athlete with a good work ethic, commitment, knows how to work hard, and is willing to be coached.

“We gave him a tryout and didn’t anticipate it going nearly as far as it has,” Pfatenhauer said. “He made it hard for us to let him go, he kept hitting, playing hard and improved every single day.”

As the baseball season is starting to make its way to the end, it will play an important series this weekend. This can allow the team to either tie Grand Canyon University for the No. 1 spot in the WAC or steal their title.

This three-game series kicks off on April 8 at 6 p.m. MDT and continues through April 10. Don’t strike out and miss the games, catch Davis in action this weekend at the Bruce Hurst Field at DSU.