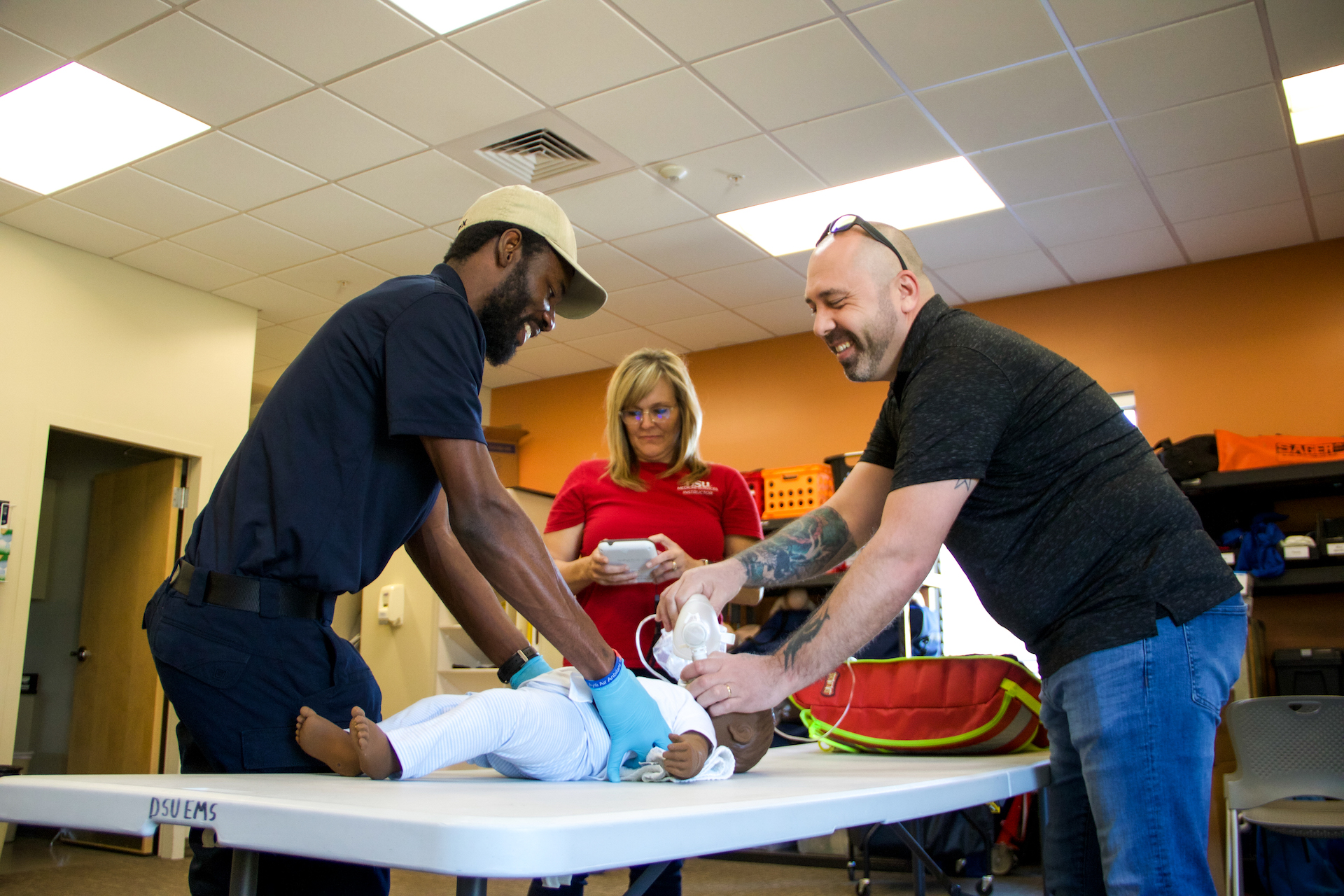 Claudel Gedeon, a freshman emergency medical services major from Port-au-Prince, Haiti, was studying to be an accountant until a 7.0 magnitude earthquake struck the country in 2010.

When Gedeon experienced the disaster, he decided to make more of his educational pursuits which led him to Dixie State University.

“I was going to accounting school, and then the earthquake happened,” Gedeon said. “I went from accounting to becoming the first emergency medical technician for Haiti.”

After the earthquake hit, disaster relief volunteers from the U.S. began to train Haitian volunteers to become first responders, EMTs and trainers themselves. Gedeon was part of the first cohort to learn the skills and help train future trainers. He then founded a non-profit called EMPACT Haiti dedicated to emergency medical service education and development. Armadeus Davidson, one of the U.S. volunteers and a DSU alumnus, became a close friend and mentor to Gedeon throughout this process, and he eventually helped Gedeon in pursuing an education in the U.S..

“When I met [Gedeon], we decided to bring him here to have him train to become a paramedic and take his skills back to Haiti to elevate their skillsets,” Davidson said. “Getting him here turned into a $35,000 venture and it has been funded by donations… [Gedeon] has met a lot of people from the first responder community, I mean donors from all around the world.”

Davidson helped to create a GoFundMe for those who wished to help Gedeon get to St. George. The fundraiser is still accepting donations to help Gedeon finish school. Gedeon said he is grateful for everyone who has donated.

“It makes me happy to see students like [Gedeon] successful in accomplishing their goals,” Bashir said. “Last year, 38 percent of our international students were on the President’s List or Dean’s List too… I love these success stories.”

Bashir said it is his job to support international students with anything they need to pursue their education at DSU. He said making the decision to pursue an education abroad is probably one of the biggest decisions of their lives, and he strives to support the students and their families throughout the entire process. When Davidson reached out to DSU officials in March 2021 to inquire about Gedeon enrolling, Bashir worked with Davidson, the health department and Gedeon to get the ball rolling– he was immediately enthusiastic about the idea of having Gedeon on campus.

“The idea was [Gedeon’s] hard work and his positive story and goals,” Bashir said. “Anyone can say they’re a Trailblazer, but [Gedeon] is the perfect example of the Trailblazing spirit.”

Bashir said he is looking forward to not only seeing more growth in the international student population at DSU, but to see students like Gedeon remain ambitious and successful no matter the challenges that arise in their lives.

Gedeon is currently taking prerequisite classes for his paramedic certificate program which starts in Fall 2022. He has faced financial challenges, challenges with visa requirements, culture shock and a heavy academic workload. Gedeon said he maintains a strong work ethic by reminding himself why it is important to persevere.

“I feel grateful to be able to accomplish this goal,” Gedeon said. “I stay motivated because this is a great opportunity to reimburse my mentors and my home country… I’m not stepping back.”

“One thing I love about [Gedeon] is he has so much experience, yet he is still very humble and teachable,” Whipple said. “He’s really eager to learn more and pass that on to the people of Haiti.”

Whipple said Gedeon’s thirst for knowledge and enthusiasm is infectious in class and group settings. She said his classmates and instructors love working with him, and she looks forward to continuing to work with Gedeon and more international students in the future.

“I’ve been in EMS for more than 30 years and [Gedeon] has renewed my faith in people entering the profession for the right reasons,” Whipple said.

Davidson said he is looking forward to seeing Gedeon graduate and begin his career as a paramedic. He said he hopes to one day work on a truck with Gedeon as his partner and continue passing on knowledge to future generations of emergency medical responders.

“Haiti is the poorest country in the western hemisphere so having an opportunity in Haiti is rare,” Davidson said. “[Gedeon] works hard and it all isn’t just to be a paramedic, but [Gedeon] feels like he has an opportunity that nobody else has.”

Gedeon said he will continue working hard to graduate and take his knowledge back to Haiti. He looks forward to seeing more Haitians become paramedics and to continue developing EMS back home.

Gedeon said: “You never know how long you’ll live. It’s better to start sharing your knowledge now. I am going to be the first paramedic in Haiti, but I won’t be the last.”