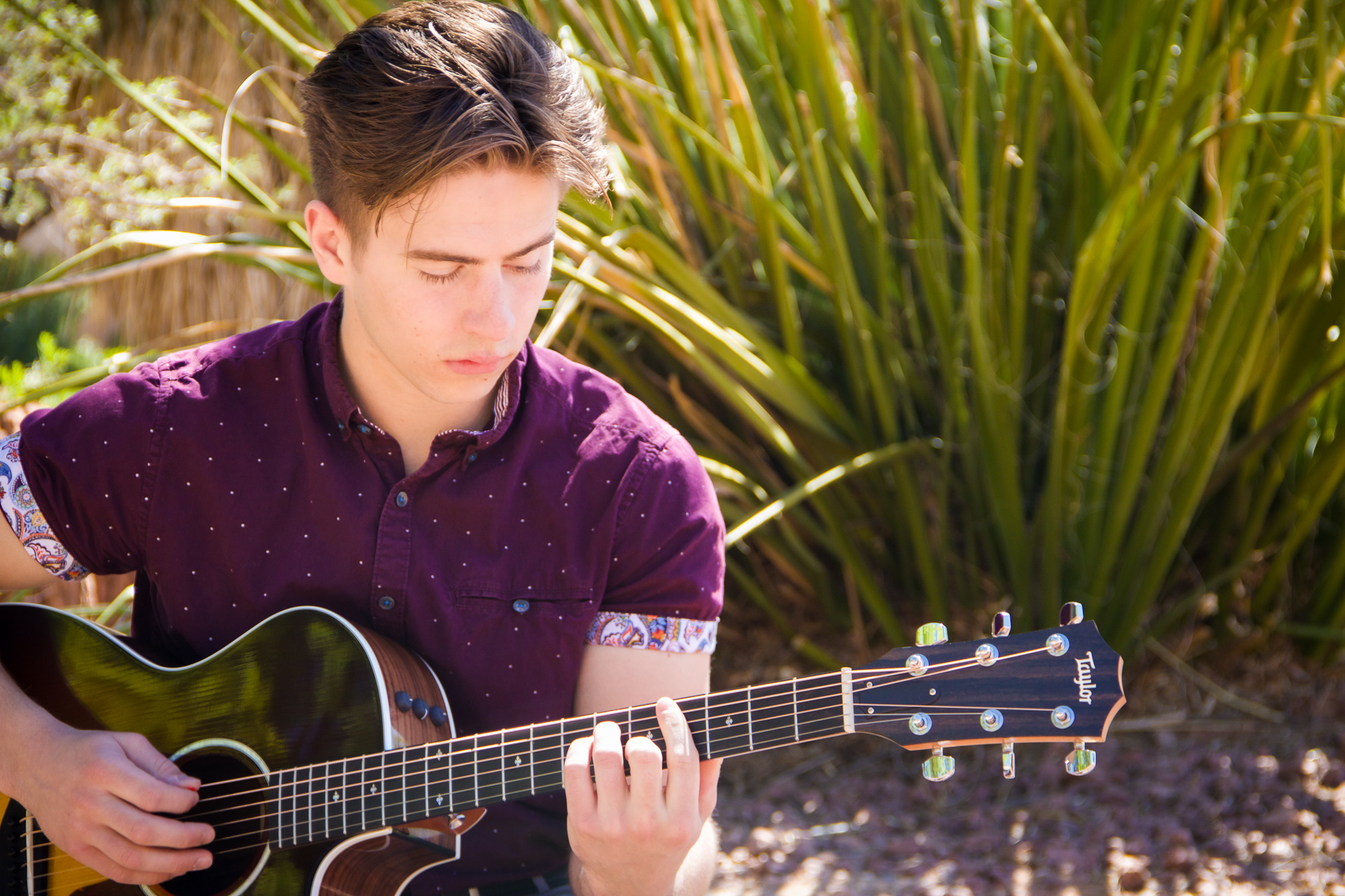 Chad Roundy performs a song on his acoustic guitar. Roundy is one of three guitar performance music majors at DSU. Photo by Naomi Vazquez.

Out of 53 bachelor’s degrees offered at Dixie State University, one student will be graduating next year with a degree in music emphasizing in music performance on guitar.

Chad Roundy, a junior music major from St. George, is the most advanced guitar performance student of the three in the music department. Roundy began playing guitar when he was 11 years old, and hasn’t looked back. He has gained experience through individual guitar lessons, DSU music classes like the Jazz Ensemble, and playing gigs around town.

Guitar instructor Lisle Crowley, has been teaching Roundy for about 8 years and is looking forward to continuing their lessons together. He said Roundy has a sense of discipline that makes him stand out as a student and as a guitar player. Crowley said Roundy plays more gigs than some artists who have been playing for decades because of his professionalism and commitment.

“He had to start working to pay for his own lessons as a young man, and that’s when he took complete responsibility for what he did,” Crowley said. “He’s always been a very dedicated student.”

Crowley said Roundy is not only a strong guitar player, but a strong artist because of the non-technical skills he has.

“He has got a good, well-rounded approach to his playing which I think is essential if you’re seeking music performance as a career,” Crowley said.

Roundy said he was sure he wanted to pursue music as a career since he began playing as a child.

“As soon as I started I knew I wasn’t going to stop,” Roundy said. “These past couple years have been the first time in my life where I’m surviving just on my gig money.”

Roundy said his professors have been an integral part of his development as an artist. He said their teaching styles during class have been key in helping him improve.

“All my classes are interactive and you’re kind of the black sheep if you’re not speaking up and being involved,” Roundy said. “You don’t just get that at any university.”

Glenn Webb, director of the jazz ensemble and associate professor of music, said Roundy’s strong sense of drive and dedication to his goals make him a successful musician at a young age. He said Roundy has sought opportunities in the community that were not there before, and he is creating much of his own career path as he advances.

“[Roundy] has crafted his goals so that they are manageable by him,” Webb said. “He is not relying on the system or the world to line up in his benefit—he is building his own career.”

Webb said Roundy is a bold and adventurous musician and because of that new opportunities will find him.

“Innovation and Trailblazing are a big part of who [Roundy] is,” Webb said.

Crowley said Roundy’s range of technical and nontechnical skills will propel him forward in his career. He said he’s met many musicians that still haven’t learned the skills Roundy has gained, and one of Roundy’s most important qualities is his dependability.

“If a student is not going to keep their word and be reliable, they’re going to have a hard time in this industry,” Crowley said. “No amount of talent can make up for that.”

Crowley said another quality that distinguishes Roundy from other young musicians is his thirst for knowledge. Crowley said Roundy would often volunteer to help him in his free time to learn more about music technology, recording and sound manipulation. He said Roundy’s desire and curiosity will serve him well as he discovers his career, and he is excited to continue offering guidance and watching him improve.

“As a teacher it is so rewarding to see a student progress,” Crowley said. “To watch them learn is probably the best part.”

Roundy said he is excited for future opportunities like playing in the live orchestra at Tuacahn Center for the Arts this summer alongside Webb. He said he’s learned a lot during his degree program at DSU, and he is looking forward to continuing his education and furthering his career.

“This is what I want to do,” Roundy said. “I’m excited to get out there and do my thing.”

To learn more about Roundy or to book him for lessons or live performances visit https://linktr.ee/chadroundy.