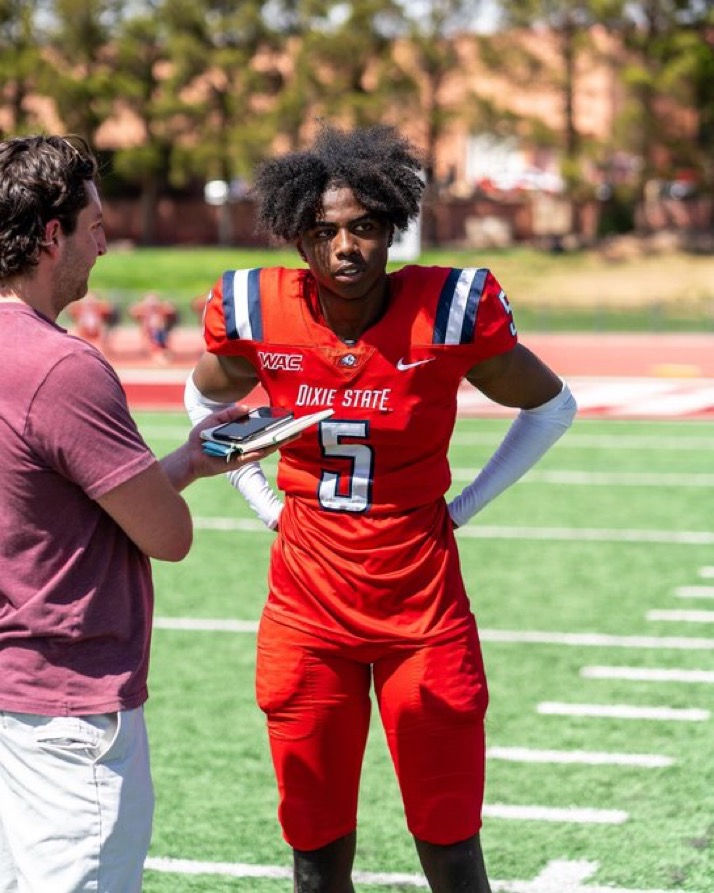 A freshman walk-on for the Dixie State University football team was awarded a scholarship after showing hard work and dedication.

Jagger Williams, a freshman management major from Baldwin Hills, California, previously attended Culver City High School where he earned three varsity letters in football. At Culver City, he helped lead the team to the 2018 CIF championship game. Williams graduated with the award of all-league pick at defensive back.

Williams is currently recognized as a defensive back on the DSU football team and strives to better himself as an athlete while also being a good example to others.

After a preseason spring football game April 9, Williams earned an athletic scholarship. Williams was surprised, not because he had earned the scholarship, but because of how fast he received it.

“It came right after the spring game which was surprising, I was excited,” Williams said. “I knew sooner or later I would get one.”

Williams is grateful for his dad and everything he has done for him. Williams said he helped shape him into the athlete he is today.

“I have to give it to my dad, I’ve been working with my dad since I can remember,” Williams said. “It started with just going to the park.”

The football team would say Jagger is an athletic, talented, funny and motivated athlete who strives to get better every day.

Tyrell Grayson, a junior management major from Fresno, California, described Williams as a lighthearted player who always brings a good laugh to difficult days in the gym or conditioning practices.

“He brings good energy to the team because he always has something funny to say,” Grayson said. “Every day he always has a lot of jokes.”

As well as bringing light to difficult situations, DSU football head coach, Paul Peterson, said Williams is an all-around great athlete, he works hard and fights every day for his spot on the team, and he was happy to award the scholarship to “a guy that’s worked their tail off.”

“Jagger is awesome, coming as a walk-on, that’s hard,” Peterson said. “You have your back against the wall. You’re fighting for a spot on the team, let alone a scholarship, he’s just embraced the role.”

The DSU football team will have its season-opening game Sept. 3 against Sacramento State University at the Hornet Stadium.