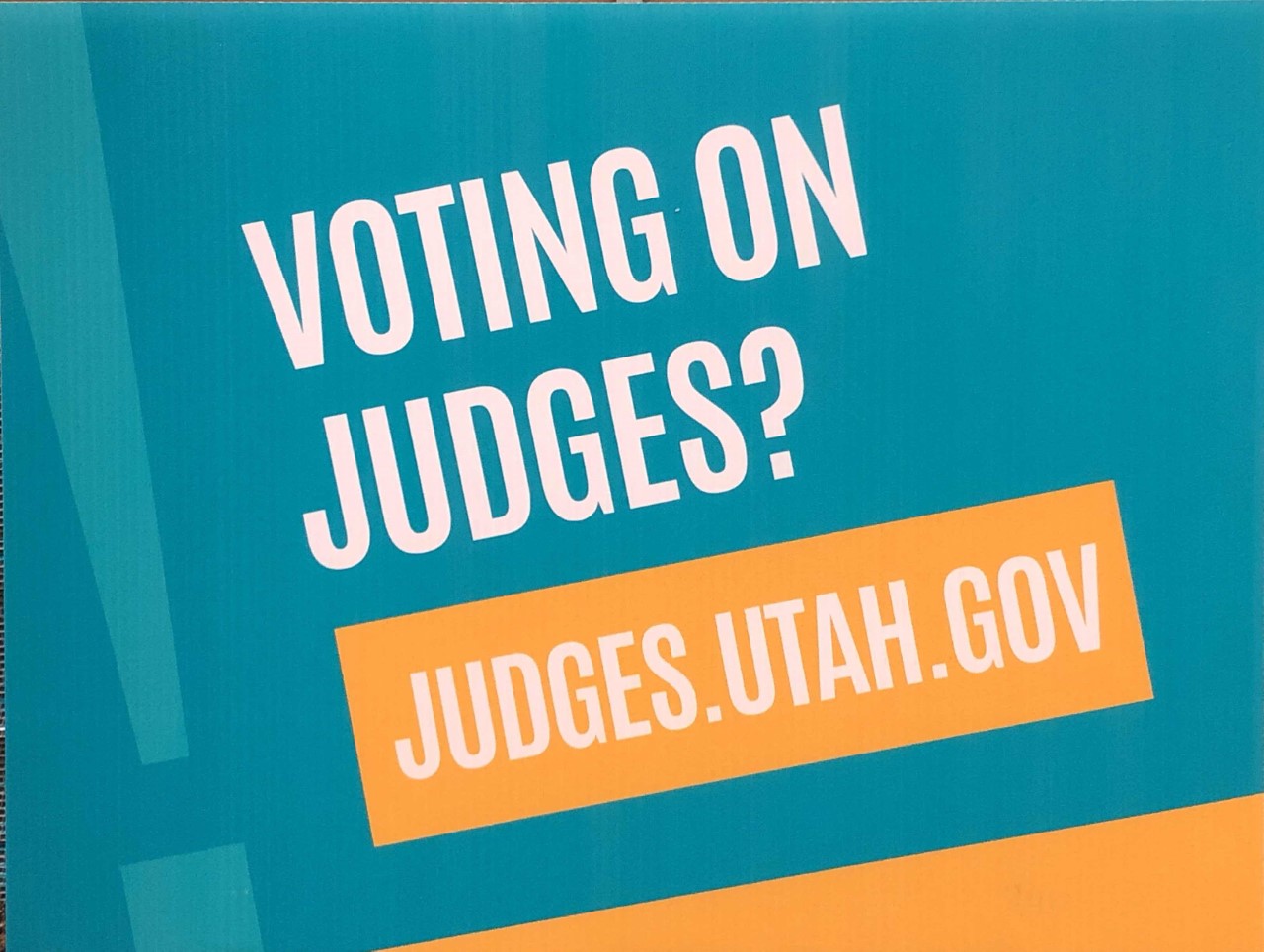 Walking around Utah Tech University campus these past couple weeks, you may have noticed quite a few blue and yellow signs that say, “Voting on Judges?” with the website https://judges.utah.gov/ below.

A couple of weeks ago, I had the opportunity to interview retired Justice Christine Durham. When asked what she loves most about the law, Durham said, “Any difficult problem I’m working on is fun.”

An American judge and lawyer, she served as Justice of the Utah Supreme Court for 34 years, which included being a Chief Justice for 10.

Talk about being a Trailblazer.

In addition to her countless community service endeavors, she is recognized nationally for her work in judicial education and her efforts to make improvements in the justice system. She is the only Utahn to have received the William H. Rehnquist award, one of the most prestigious judicial honors in the country that is given to a state court judge who exemplifies the highest level of judicial excellence, integrity, fairness and professional ethics.

Doesn’t that sound like a judge you would want to vote for?

Now retired, Justice Durham volunteers on a number of law-related groups, including as a commissioner on Utah’s Performance Evaluation Commission. When I asked Durham why it is important to vote for judges, she told me people don’t realize the impact the judicial branch has on our lives.

Judges are responsible for interpreting the constitution, deciding everyday disputes, and crafting rules that will govern similar cases.

Durham said, “It matters that we have neutral, fair and impartial judges who will take the time and make the effort to solve those problems on a regular basis.”

She also said Utah has one of the most fair and open systems when it comes to evaluating and selecting judges.

“If people will take the time to look at what is on the website of the Judicial Performance Evaluation Commission, they can find out pretty much all they need to know about judges,” Durham said.

This information includes what attorneys, the public and courtroom observers say about them, as well ratings on their performance and ability to do their job.

Prior to her retirement from the Utah Supreme Court in 2017, Justice Durham received a perfect score for the “diligence of her work habits, noting her excellent preparation for court proceedings and her attentiveness,” according to https://judges.utah.gov/.

When asked what qualities and traits it takes to be a good judge and lawyer, she said because they work first and foremost with language, analyzing how language works and what it accomplishes is crucial.

When preparing for a career in law, she said your major does not matter, as long as your education includes an opportunity to develop both a facility with language and a critical temperament.

“You can major in chemistry but learn how to write papers and think logically,” Durham said. “Learn how to analyze and express yourself clearly.”

Justice Durham has written majority and dissenting opinions on many incredible cases over the course of her judicial career, including the civil rights of polygamists, fetal rights, gun rights, and trans-athlete rights.

When asked what issue she is most passionate about, she said, “whichever one is under consideration at the moment.”

She noted that her first commitment and a huge amount of energy in her early days were spent negotiating for and working on equal rights for women in the legal and judicial fields.

“Women were overworked and underutilized, and it was important to me to open up opportunities in the profession for women,” Durham said.

Unfortunately these problems still require attention. Durham is a staunch believer in human rights and constitutional rights and anything that involves a deprivation of individuals because of their status has her attention.

In an interview with Utah Women’s Walk, Durham said she wants to be remembered for loving the law and serving it, as well as making life better for women. When asked what our generation can do now to continue building on the foundation that she and others have created, she said as a nation, the list of things that needs doing is endless.

Justice Durham said: “Unfortunately even if we change biased language within laws, bias is still embedded in the systems that govern us. My plea to young people is to find out about our history and where things started. Find out why things are the way they are now, and use your creative energy to do something about it. Even if it is just voting for a judge, it’s a start.”

Nov. 7 is the last day to return a mail-in ballot, and Nov. 8 is Election Day. We all have the chance to vote on the judges of our community. Visit https://judges.utah.gov/ today to finish your ballot and cast an informed vote.