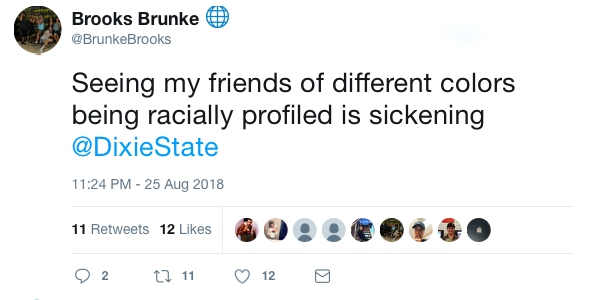 Dixie State University students raised concerns of racial profiling on campus on Aug. 28 through Twitter to bring their concerns to light publicly.

The tweet read: “Seeing my friends of different colors being racially profiled is sickening,”and quickly gained 12 likes and 11 retweets.

Brooks Brunke, a sophomore theater major from Las Vegas, was the author of the tweet. He said there were various instances of racial profiling on campus he heard about from friends but decided to take to Twitter after witnessing what he described as an instance of racial profiling from a resident manager.

“The RM’s respectfully came to our dorm and said, ‘We got a noise complaint on you guys so keep it down,’” Brunke said. “Then the RM swung the door open again and stuck her face through, right over a trash can, and said there was a weird odor in our dorm.”

Brunke said the RM proceeded to question the only three non-white students in the room about the odor and if they had been smoking marijuana that night.

“At that moment we didn’t know why [the RM] would come to the conclusion that a weird odor from a trash can would be from smoking pot,” Brunke said.

Nathan Fields, a sophomore criminal justice major from San Bernardino, California, was one of the students in the Campus View dorm who felt targeted by the RM.

“I felt disrespected and I didn’t know what made [the RM] think me and my friends were smoking or why she was asking us questions, so words can’t really explain how I felt,” Fields said. “I guess the word would be disgusted.”

Fields said he wouldn’t change his behavior or appearance in situations where he feels targeted, and only asks administration and other points of leadership on campus to empathize with diverse students and their experiences.

Brunke and Fields said they agreed social media was a tool they used to raise awareness to the concern because they didn’t know what else to do.

“[Social media] is free and it has a huge audience, and for kids to be able to use that as a tool, it’s perfect,” Brunke said.

Blair Barfuss, chief of campus police, said social media is a good place to start for students, but students have other options and resources.

“Social media is a good starting point but I personally would like the interpersonal communication to occur so that we can actually sit down and have the conversation and find the right solution,” Barfuss said.

Barfuss said transparency is a value of the campus police department as the officers strive to be an unbiased, third party of fact-finders.

Doajo Hicks, general counsel, said students, faculty and staff experiencing issues with bias and discrimination can file a proper complaint to be investigated through his office.

“[Students can] report to the campus police, to a faculty member, the dean of students, Dr. Toy, chief diversity officer and director of the MIC, or my office,” Hicks said. “Or the point is sometimes speaking to that person if you feel that they’ve said something offensive to you, because that usually can handle the situation.”

Barfuss said there will soon be an anonymous complaint filing system implemented on the campus police website. Hicks said within the next month, his office will set up a similar system online for students to anonymously address their concerns.

Brunke and Fields encourage others who have witnessed similar situations of racial profiling and discrimination to raise their concerns and demand solutions.

“Once students know they’re not alone, they’ll be encouraged to speak up and they won’t be afraid to share their own experiences,” Fields said.