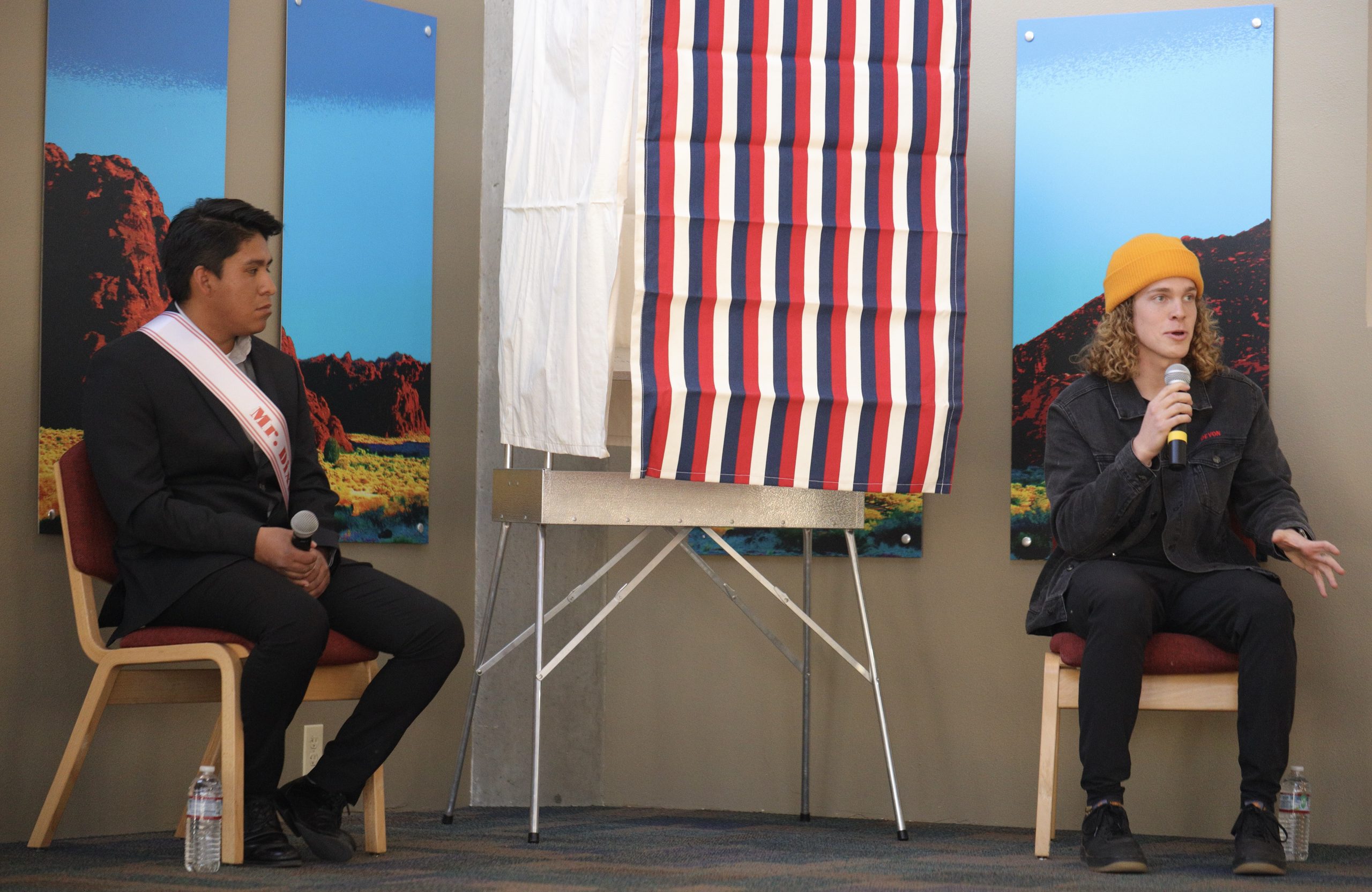 Student body elections are coming to an end March 10 at 1 p.m. This is the last day to vote for student body president.

The final election for student body president is between Jose Toral and Devon “Dink” Rice.

The debate on March 8 allowed the candidates another opportunity to explain their platform more in-depth and answer questions from voters.

First, Ben Johnson, moderator of the debate, gave the candidates one minute to tell the audience about themselves.

Rice spoke first about the various positions he has had within the Dixie State University Student Association. He was also a DSU ambassador for a year and a half before being invited to apply for student government. Rice was the social events director during COVID-19. He said it was tough but they still managed to pull off an event each week during the pandemic in 2020. Rice said this was a fun experience and it led him to apply for vice president of student life, this is the current position Rice holds.

Rice said, “I feel like I’ve got a lot of experience… It’s been a great ride and I am just really ready to take that next step forward.”

Toral spoke next about how he has attended DSU for six years and how he got involved with student government. Toral said when he first attended DSU he was a part-time student and he didn’t think getting involved in the university was for him. Until he decided to go to one of the DSUSA events, when he was introduced to the council and was invited to apply for the student alumni association. Toral was given an assistant director position but shortly became the director of special events. Toral also has experience with DSUSA, since he was the admin assistant to the vice president of service. Toral said this is where his journey began and where he gained involvement experience.

Toral said: “I developed a passion for student involvement. It is what kept me going and [it’s] what inspired me to get more involved.”

Question 1: How will you, as student body president, help students grow and succeed?

Toral said he thinks he could help the student body by making sure everyone knows about DSUSA’s open door policy, and by having a voice to vouch for students. Toral wants students to know they have a place to come home to. Toral explained how the student body council can help students in need, and he wants to guide students towards any resources students may need. Toral explained he is willing to walk students through each step of the way so they feel comfortable as well as to help students succeed in life.

Rice said while working as social events director he noticed almost a direct correlation between the success of students and their social life. He explained this is part of his campaign platform. He said he wants to tackle mental health and he plans to do this by hosting events to help. He said some students don’t know how to access resources on campus, so he wants to find ways to make things more accessible. Rice said he believes if a students’ social life is tackled then all of the academic stuff will follow.

Question 2: What have you done well this last year in DSUSA and what do you think you could have improved on?

Rice said there were a lot of things that were new to him regarding the executive council. Rice said he learned a ton from the council and it gave him a lot of perspective of what he wants to see/do on campus in the upcoming year. Rice said there are a lot of areas in the business world he has found his place in, and being a part of DSUSA has opened his mind up to things he wants to accomplish next year.

Toral said while in his position of admin assistant to the VP of service it was the first time he actually got to work with students more. He said coming from the student alumni association he was dealing with a lot of community members. Toral said one thing he improved on was developing strengths and skills on how to engage with students. He said something he needs to work on is being more out there and to not be scared of taking big risks.

Question 3: As the U.S. is getting back to normal, how will you help students succeed in college in this post-COVID-19 transition?

Rice said he likes the path that the university has been on as far as COVID-19 protocols. He said he agrees with DSU’s choice to keep regulations to a minimum when the university was faced with COVID-19 cases on campus. Rice said he is glad DSU did that because one thing we are known for is our student life. Rice said he wants to keep an open door policy and make sure students know about the resources available to them.

Question 4: How would you help increase students knowledge of the resources and educational tools on campus?

Rice explained how one person needs to see a flyer 30 times before they realize they want to go to the event, this tells him he needs to focus on marketing for everything. This means having a strong presence on social media. Rice plans to have electronic billboards on campus so the information can be changed easily and frequently.

Toral said DSU has done a great job of advertising all of the events on campus, from flyers, to Blazer Digest, to promoting all over social media. Toral said one thing he thinks that can be worked on is including each of the different colleges on campus. Toral said he wants to focus on targeting all students, not just the students we see on the main campus.

Question 5: Since DSUSA controls the budget for a lot of the clubs and resources on campus how can you ensure the budget is being distributed fairly?

While Toral doesn’t have a lot of experience with budgets he said while working with the VP of services he had the chance to see how each of the executive council members take their own role in deciding the budgets. Toral said as student body president he would work with his team to ensure everything is evenly distributed. He wants members to feel like they have a say in how much budgeted money each club/resource may receive.

Rice said DSUSA has the budgets figured out very well and they have a good history in past years. Rice said he trusts the process DSUSA has used up until this point and he plans to continue using the same system in the future. He said as a business major he understands these numbers and nothing will be unfamiliar to him.

Question 6: How will you help advocate for students and help them maintain the fees of going to college?

Toral said this year was the first year he was able to look at the price of student fees and how much they increase, but he said DSU does a great job accommodating everyone’s needs. Toral agrees with Rice in the sense that students fees should go up because DSU is already known for having a low tuition rate. Toral said if student fees go up little by little each year it will help grow that experience throughout all DSU students.

Question 7: How do you plan to facilitate this transition from DSU to UTU?

Toral wants to transition to UTU without forgetting who we are as DSU and the traditions that go along with DSU culture. Toral said he likes the fact that he is going to graduate from UTU, but he thinks his most memorable times will be remembering what the Dixie spirit was like to him. He wants to remember the legacy students left at DSU and he wants to start a new legacy as UTU.

Rice said he loves that the name is changing, and as a marketing major he said it is exciting to be able to front–run it. Rice thinks some DSU traditions need to be left behind. He explained just because you change the name of the tradition doesn’t make it less wrong. He said he doesn’t have a solution to make everyone happy about the name change because he is not directly affected. Rice wants to work well with the students and community members to see what is best for everybody as far as what traditions need to stay and which ones need to go.

Question 8: What are some problems students face on campus and how would you address them?

Rice said part of his platform involves working on policies. He said a lot of students don’t know about the policies DSU has. Rice said there are a handful of policies that could save students a lot of money if they were to get removed. He said the main two policies he wants to focus on are dining services and the ticketing office. Rice said he plans to take these policies out of place as he likes to call them a localized monopoly.

Toral explained how he wants to focus on students’ mental health as he’s seen a struggle with this on campus. He said he wants to see a bigger improvement on how he can make students aware of what opportunities are out there for them. Toral reiterates he wants DSUSA to have an open door policy so they can help students find a solution, student-to-student.