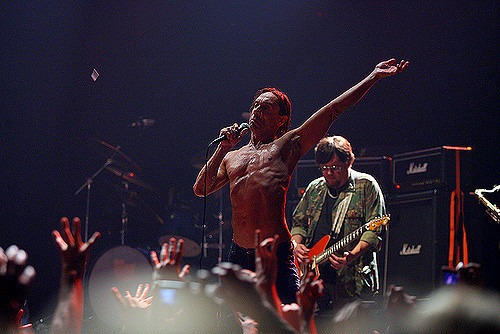 Everything about Iggy Pop’s “Lust for Life” is alarming: its sound, its nihilism — even its portrait of the rocker’s sort-of-handsome face on the album cover that grins at us dopily. Yet like the Beach Boys’ “Love You” and Fleetwood Mac’s “Tusk,” “Lust for Life” is a record that strives for and arguably meets the high standard of great musical art.

David Bowie, revered more in death than he ever was alive, co-produced and played on this 1977 release. And his influence shapes the music constantly as sonorous discharges from his Moog synthesizer weave themselves around the LP’s chopping riffs and Iggy’s reptilian cries.

“Lust for Life” inundates listeners with its examinations of human ruin, too. Take the title track, on which Iggy declares over a bricolage of frat rock licks and mambo beats: “I’m worth a million in prizes / Yeah, I’m through with sleeping on the / sidewalk—no more beating my brains / with the liquor and drugs.”

A collision of existential worry and early-punk rock thwack similarly characterizes “The Passenger.” On this one, Iggy documents what appears before him as he rides an elevated train through West Berlin: “I see the bright and hollow sky / over the city’s ripped backside / and everything looks good tonight.” For Iggy, ugliness is beauty, beauty ugliness, and he enjoys it “under glass.”

The singer’s lifelong compulsion to experience new, sometimes extreme,  sensations dominates every moment of “Lust for Life.” On “Some Weird Sin,” he describes the panic and anguish that force him to make dangerous decisions: “Things get too straight / I can’t bear it / I feel stuck — / stuck on a pin.”

Why listen to music like this? What gain can come from hearing a madman wail? The answer is simple. “Lust for Life” is a lovely-sounding thing the same way the literary nightmares of Gogol and Sartre are beautiful or the bitter surrealist movies of Buñuel.

Sadly, but not unexpectedly,  “Lust for Life” yielded meager returns for Iggy’s label, RCA Records, when it hit stores, costing him his contract with the company. Yet, over the next decade, always certain (or, at least, hopeful) that his role as rock’s underground man would eventually find mainstream acceptance, Iggy continued making incredible music. Four spectacular releases followed “Lust for Life” in rapid sequence: “New Values,” “Soldier,” “Party” and “Zombie Birdhouse.”

But none of them yielded hits, either. And by the mid-1980s, Iggy abandoned his avant-garde ambitions and made the ultra-commercial “Blah-Blah-Blah,” again with Bowie producing, and this time the pair scored with a bit of synth-pop called “Real Wild Child.” As Johnny Thunders said once: “Wrap it up, call it art, now your record hits the charts.”

The success of “Blah-Blah-Blah,” though, which depended so much on Iggy concealing his mesmerizing weirdness, wrecked his friendship with Bowie. And now that Bowie is dead, the possibility for one final collaboration between the two, of course, no longer exists.

Such a sad thought! I can’t bear it.