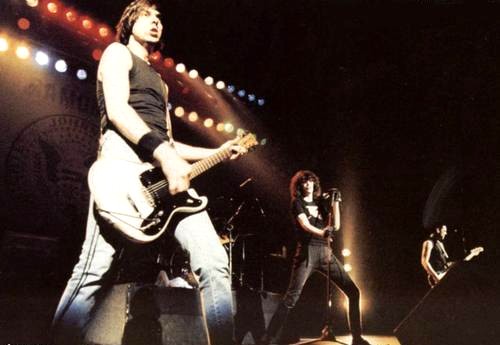 My mother used to work the occasional weeknight when my sister and I were kids — she taught art to adult students in Washington, D.C. My dad, always well-meaning, would take us to McDonald’s for dinner when Mom was gone, and then over to the mall to get books at B. Dalton.

I remember riding home one night from one of these school-night outings, squished up on the backseat of my father’s Ford Escort listening to the Ramones’ first album. A neighborhood friend, Adam, had loaned me his copy. To hear the songs over the noise of the car’s manual transmission, I had to press the portable stereo’s foam-wrapped speakers to my ears. The tracks all sort of sounded the same to me back then, with Johnny Ramone’s jackhammering guitar riffs and Joey Ramone’s wet shower curtain of a voice. I liked the music a lot.

The song’s yearnings for romance and global domination to this day strike me as paranoid–even psychotic–but there’s great art in Joey’s delivery as he manages to swathe the madness with melancholy and hope. Ever since that night, honestly, there’s never been a period in my life when I wasn’t listening to the Ramones.

The musical output of their 20-year run, I can tell you, is made up for the most part of charming but resolutely goofy takes on topics like lobotomies, worm men, dancing cretins, pet cemeteries and UFOs. The corny kitsch that distinguishes so much of the Ramones catalog, in fact, left me early on suspicioning that the guys in the band, despite their ability to come up with great hooks, were probably all nitwits or at least pretended to be. “D-U-M-B!” Joey cries out on “Pinhead.”

This willingness of mine to regard the Ramones as a low-brow put-on made it possible to ignore several songs that should have bothered me at a moral level, I’ll admit, ones like “Pinhead” and “Weasel Face” that make light of disabilities and physical shortcomings. But I’ve always allowed myself to ignore their cruelty.

Tracks about Nazis recorded during the band’s early years, as well, never struck me as anything other than bad taste gags, especially since two of the band’s founding members, Joey and Tommy, were Jewish. As Johnny Ramone explained in his autobiography: “We thought … Nazis were funny. We thought sniffing glue was funny, too.”

So I’ve never experienced much in terms of worry or remorse, either, when I’ve praised the Ramones to others, my five-year-old, for example, or when I’ve found my foot tapping along to a track like “Today Your Love, Tomorrow the World,” the song I mentioned previously, even though it has lines like “I’m a shock trooper in a stupor / Yes I am / I’m a Nazi schatze / Y’know I fight for the fatherland.”

My perception of — and affection for — the Ramones, however, has undergone some painful changes recently. Clownish songs about brownshirt wannabes no longer seem as goofy and harmless as they did, not now, that is, as anti-democratic, autocratic and racist ideologies exert an increasingly dangerous influence over our country.

Just this past week, vandals knocked over headstones marking Jewish graves in a Massachusetts cemetery. Last October, an anti-Semite goaded by internet conspiracy theories shot up a Pittsburgh synagogue and killed 11 people.burgh-shooting .And a year-and-a-half ago, white power revolutionaries wearing khakis and polo shirts marched across the campus of the University of Virginia, one of the intellectual capitals of the South, aping Nazi rhetoric as they shouted “Jews will not replace us! We will not be replaced!”

I’m too much of a supporter of the First Amendment to argue for censorship in popular music. Nor have I ever cottoned to the idea presented long ago by Tipper Gore that music can make good people do bad things. I refuse to believe, as well, that a track as silly as “Today Your Love, Tomorrow the World” could lead someone to embrace Nazism and violence. Yet I find it not at all hard these days to summon in my head the image of a fledgling fascist, a burnished Wehrmacht helmet on his head and Apple AirPods pressed into his ears, listening to this song as he daydreams of rallies, flags, white ethno-states and murder.

This thought distresses me enormously, and I find myself wondering, for the first time really, if I’m doing something wrong now whenever I drop the tonearm or press the play button and listen to the Ramones — the world’s first punk band — and return to that rich, rich sound that first pierced me in the back of my dad’s little car 35 years ago.