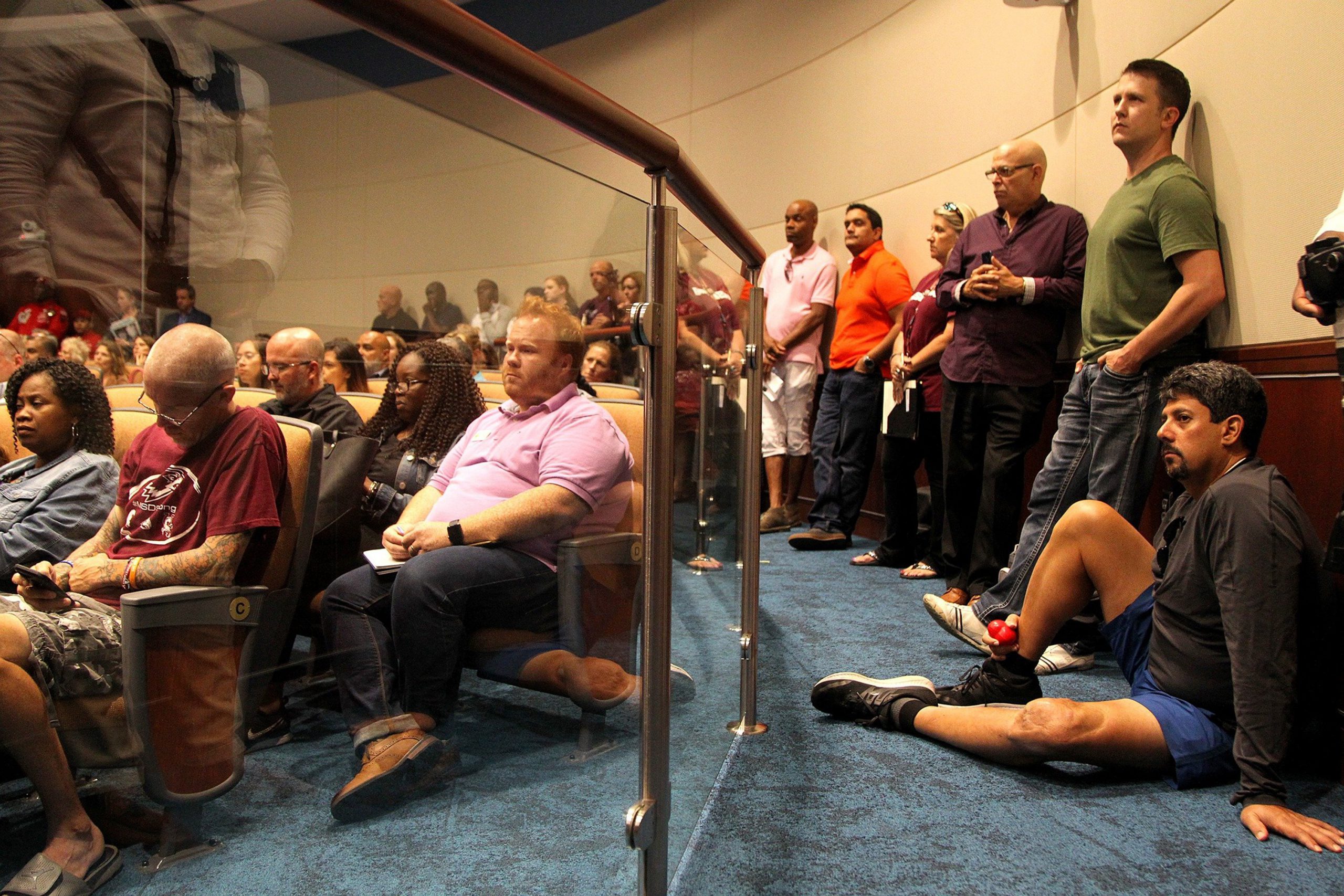 Attendees participated as panel members from different local health and community groups answered questions and discussed different topics related to the two suicides of Parkland shooting survivors in a week’s span during a Mental Health and Suicide Prevention Town Hall Meeting hosted by the city of Coral Springs at the city hall, on March 27, 2019. (TNS)

While President Donald Trump was worrying about “making America great,” he could have been making American kind, compassionate, or — at the very least — capable of enacting and accepting change.

We’ve seen the headlines over and over. A lone gunman killed 17 students at Marjory Stoneman Douglas High School in Parkland, Florida in 2018. A domestic terrorists killed 58 people at the Route 91 Music Festival in Las Vegas in 2017. A madman killed 28 people, including 20 children, at Sandy Hook Elementary School in Newtown, Connecticut in 2012.

Tragedy strikes, and the world moves on, with or without you.

The nation watches on from a distance, offers its “thoughts and prayers,” and forgets anything ever happened the moment a Kardashian flaunts her newest body modification or shallow predicament to the cameras.

However, for the friends and families involved, everyday is another battle against the terrifying and sorrowful reality they have come to know. Some of those affected start charities, begin political movements, or simply try to learn how to live through the unimaginable.

Parkland prepared for the anniversary of the heinous act that ripped apart its community and pulled at the heartstrings of the nation. Valentine’s Day came and went without incident and Lori Alhadeff, mother of Alyssa Alhadeff, one of the victims of the Parkland shooting, said she was relieved.

“I’m like, ‘okay, we did it, we got through it,’” Lori Alhadeff said in an interview with Buzzfeed News.

Then, two suicides shook the community.

Sydney Aiello was a 19-year-old college student, friend of Alyssa Alhadeff, and survivor of the Parkland shooting. Aiello died by apparent suicide one month after the anniversary of her best friend’s murder. Within the week, a student at Marjory Stoneman Douglas High School died by suicide; the name has not been released as the family wishes to remain private.

In the midst of the two suicides connected to the massacre in Parkland, Jeremy Richman, father of 6-year-old Avielle Richman, a victim in the Sandy Hook Elementary School shooting, also died by suicide.

Aiello struggled to attend her college courses because she was terrified to be in classrooms. She suffered from survivor’s guilt after watching her friends be murdered in front of her. Her nightmares began the day her classroom became a war zone and since that day a different war exploded within her.

The real tragedy is that nothing is being done.

New Zealand had its first shooting since 1997 on March 15. Fifty people died at Christchurch Mosque. One week later, Prime Minister Jacinda Ardern announced the ban of semi-automatic weapons and assault rifles. The United States has had 15 mass shootings since 2007 and has yet to pass anything.

Reach out to your representatives and tell them enough is enough. Tell them it is unacceptable for military-level weapons to be in the hands of civilians, and it is increasingly important to adapt the means in which people can acquire fire arms. Tell them times are changing and so should the background checks. Tell them it is unacceptable for countless children, students and Americans to have died without a second thought.

If you or someone you know may be considering suicide, call the National Suicide Prevention Lifeline at 1-800-273-8255.