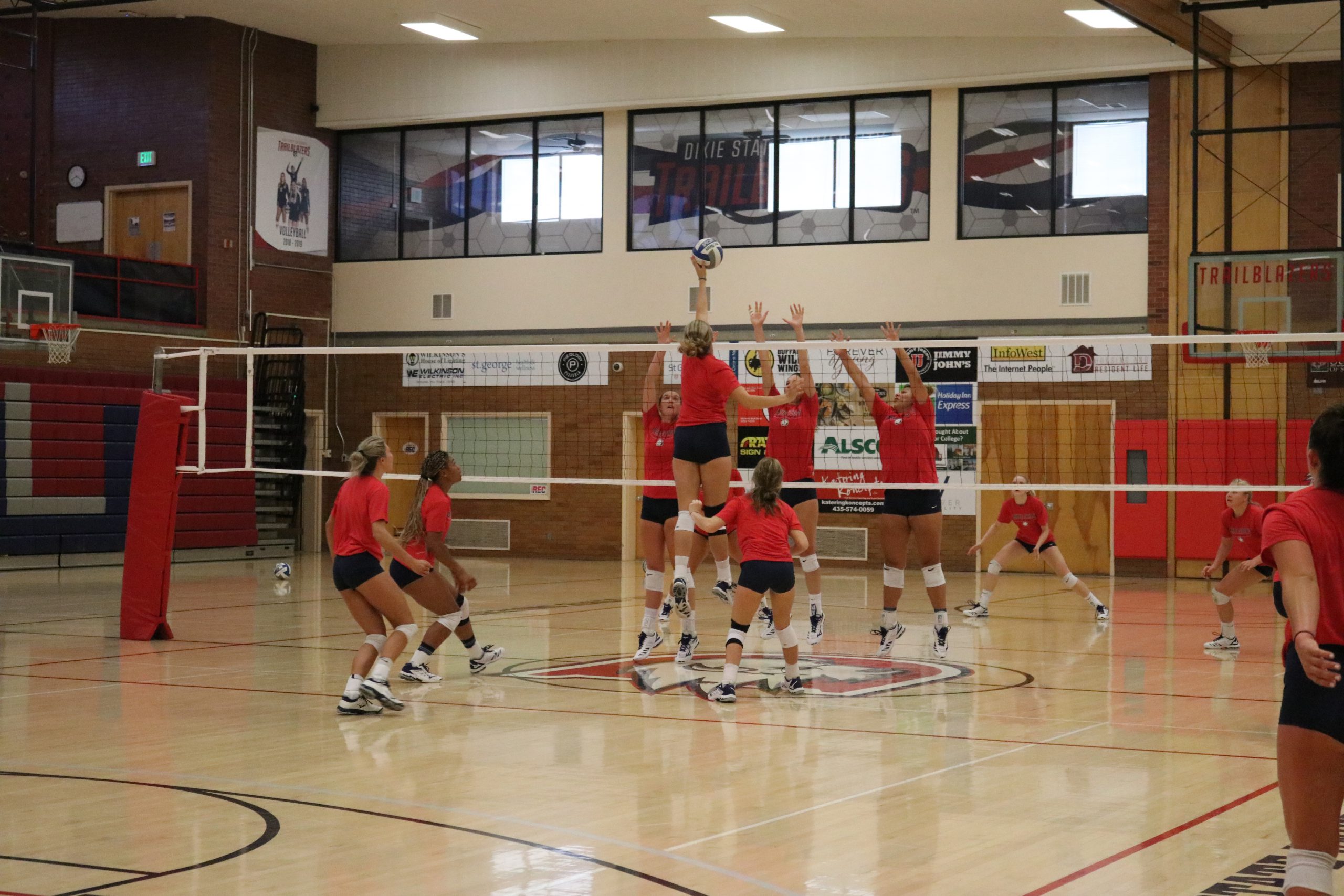 Lauren Gammell, a Senior media studies major from Spanish Fork goes up for a block during a practice scrimmage. DSU will be playing against St. Cloud State, Simon Frasier, Stanislaus State and Northwest Nazarene. Photo by Madison Boyd.

Head coach Robyn Felder laid out the game plan on how the team will prepare for the tournament. She said it starts with putting the starting lineup in place, creating chemistry and getting the right timing between hitters and setters.

The teams DSU will be playing in this tournament are St. Cloud State, Simon Frasier, Stanislaus State and Northwest Nazarene.

St. Cloud State, Simon Frasier and Stanislaus State were all ranked top 100 or higher in kills per set, assists per set and digs per set in the 2018 season according to the NCAA.

Right-side hitter and setter Megan Treanor, a junior media studies major from Salem, had the most kills, kills per set and fourth-most blocks on the DSU women’s volleyball team last season, according to DSU Athletics.

Treanor said she is most looking forward to playing NNU because DSU defeated them 3-2 last season in an intense five set match at the NNU-hosted Fairfield Inn & Suites Invitational.

Felder said these preseason matches are important because they set the tone early and help prepare the team on what’s to come in the Rocky Mountain Athletic Conference. Felder said she likes to find what the team is doing wrong in the preseason and fix it. If the girls are not hitting well, or are getting blocked or beat repetitively, they go back to the drawing board and make adjustments.

Felder said: “Make [the adjustment] in the middle of the game. Don’t wait until the game is over and you got beat on it ten times; make an adjustment. Make them do something they’re not comfortable doing.”

Middle blocker and outside hitter To’a Faleao-Balch, a senior recreation & sports management major and from Lehi, was second among the DSU women’s volleyball team in kills, kills per set and had the fifth-most blocks last season, according to DSU Athletics.

Faleao-Balch said: “[This season] means a lot because this is our last season in the RMAC and last year was our first year and we were co-champions. So, if I play like I did last year, I can help Dixie take the RMAC this year.”

DSU women’s volleyball will have its first match against St. Cloud State on Sept. 5 at the Student Activity Center at 7 p.m.