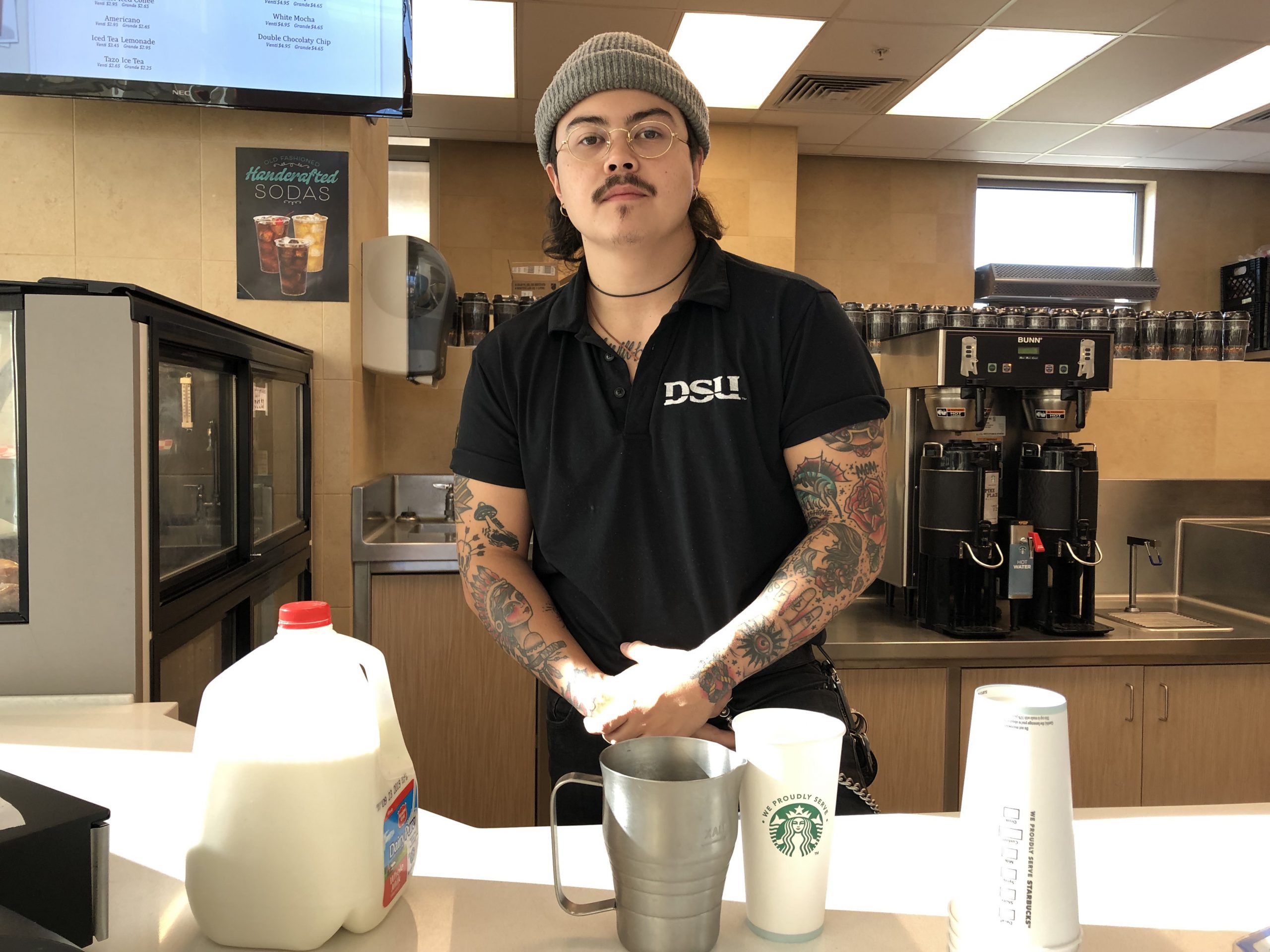 Austin Mariano a junior computer science major from Maui, Hawaii has worked at the Dixie State University coffee shop for three years now with two tattoo sleeves covering both arms. Tattoos and piercings are a form of expression and should not be bias solely on their physical appearance and entirely on their credentials and ability to excel in the job. Photo by Jessica Johnson

Imagine walking into your doctor’s office and having him sit down with two full tattoo sleeves covering his arms, blue hair and a nose piercing.

Obviously he is more than qualified, but would his appearance change your trust in his work and would you feel his diagnosis was ethical?

Depending on who you are talking to and where you are from, having an openly visible tattoo, piercing, certain hair color, or even the way you are dressed, can determine whether or not you are considered to look professional, or even determine employment opportunities.

Living in Utah, beliefs and ideals are very conservative, but it is hard to understand how someone else’s idea of art or beauty can integrate with someone’s work ethic. Piercings and tattoos are a form of expression and should not have any bias towards them.

New research from LinkedIn reveals the bias against image could be causing businesses to miss out on top talent, the research shows that three-fourths of recruitment professionals think candidates image plays a significant role in the hiring process.

However, As time evolves, so do our mindsets. As the future generation, we still face inequality but we have also progressed in so many ways. For women, only eighty years ago in the fall of 1934, Levi’s company introduced the world’s first jeans made exclusively for women and even then it was still unacceptable to wear them in the workplace. Prior to that, it was very frowned upon for women to dress that way at all so being able to wear them whatsoever was a big improvement.

Women can now wear jeans and no one thinks twice about it. Tattoos and piercings have created a negative connotation for the workplace as well and for many people can it can affect their employment opportunities still today.

That mindset has evolved for many, however, Utah residents still think negatively when they see someone with a lot of tattoos, different hair color or a piercing and have a very cynical outlook. According to a study by CareerBuilder, “60 percent of employers will not hire candidates with tattoos or body piercings” That same study indicated that tattoos were the third most common reason used by employers not to promote an employee.

Tatum Garr, a senior population health major from Syracuse, had to cover all of her tattoos for her CNA clinic. “In the instruction manual before the clinic, it said that no tattoos could be showing and must be covered up, it didn’t matter how big or small they wanted them all covered.”

Students who enter nursing school may very likely be told they can not have any visible tattoos or piercings. In many schools, it is a standard policy that they have to be covered or piercings must be removed to remain in the program.

Tattoos and piercings have become a lot more popular over the past few decades, nevertheless, they can still negatively affect your chances of getting hired. The stereotypes for them are viewed as rebellious, unprofessional, and even irresponsible.

For many, body art is a form of self-expression and are not always a reflection of who someone is inside. The stigma around tattoos must end. Judging someone based on their appearance is discriminatory and is completely unacceptable and, quite frankly, no longer relevant.

Taylor Cook, a junior health science major from Logan said, “I have been to several job interviews where they have asked me if I have any visible tattoos and if they could see them to make sure they weren’t offensive.”

Cook was a CNA and said in her job interview the staff told her that because she was working with elderly patients that found her nose piercing offensive, that she either needed to find a new stud to put in her nose that was not visible or to just take it out completely. She also talked about how finding a job as a waitress in St. George was difficult to whether her tattoos and piercings because of how the elderly people who she would serve would feel with her being their waitress.

What someone else chooses to put on their body is none of anyone’s concern. As Americans, we are so lucky and fortunate to have the freedoms that we do. We should have the choice to get tattoos and piercings without the fear of being fired or being unable to find a job.

Before you look at someone and see a tattoo and immediately judge them, remind yourself: you do not know their character and can learn to look deeper than just the outside view. Unemployment due to someone’s appearance is discrimination and should not be tolerated.

Individuality and self-expression is a beautiful thing and that is how anyone with a tattoo, nose piercing, the color of their hair or even their outfit should be viewed.

I encourage each of you to look beyond the way you see someone on the outside and to go deeper- form an opinion of who someone truly is not just the way you see them passing by. You never know what kind of talent or person you could be missing out on getting to know.