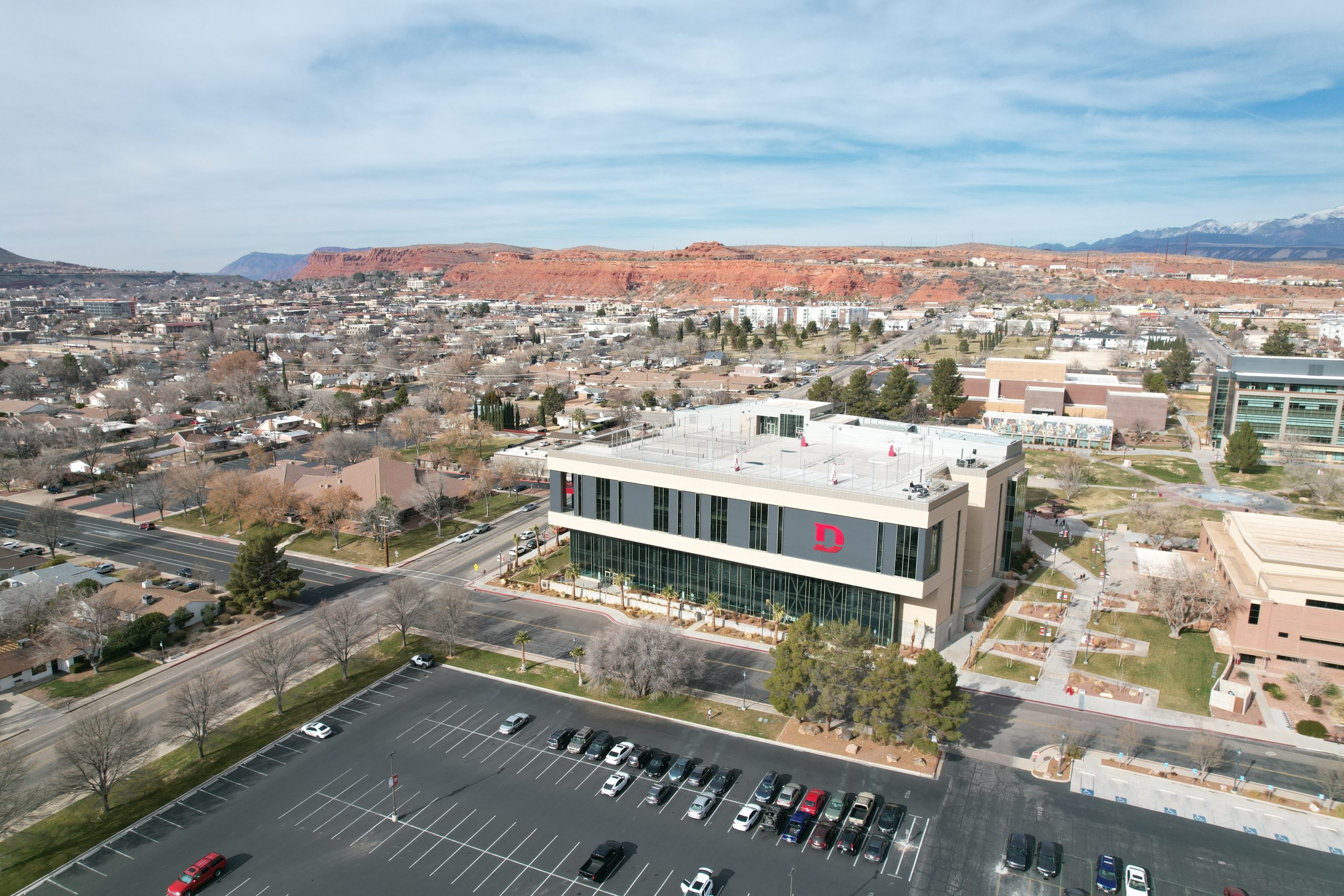 Dixie State University is slowly preparing for its rebranding process into Utah Tech University. The new logo is set to be publicly released in May. Photo by Misha Mosiichuk.

The university has been working on this process for close to a year now, and since it’s been made official, the community is wondering when the campus is going to start to change its brand.

“The rebranding process is multifaceted, and there are a lot of moving pieces the university has to take into consideration along the way,” said Jyl Hall, director of public relations. The first step they took was the university logo, which is in the works right now. Once the logo is finished, the university will start ordering signs.

When talk of rebranding was first brought up and Utah Tech University was a candidate for the new name, there was worry across campus that putting the ‘Tech’ name on the university would cast a shadow on its non-tech related fields.

“The term tech in this instance is referring to our polytechnic academic focus, which means receiving an active education, working with industry partners, and being career ready upon graduation,” said Jordon Sharp, vice president of marketing and communication. “These mission tenants are for all Utah Tech students, not just those studying tech related fields.”

The university has shown the community the rebranding process by giving them a page to go to on the university website to help them along the way. On this page, it has a list of frequently asked questions about the name change process and the best answer the university can give.

At the top of the list, one of the most asked questions is what name will be on spring 2022 graduates’ diplomas. Those graduating this spring semester will still have ‘Dixie’ on their diploma. If students graduating before the name officially changes on July 1, they can request a new diploma for $10.

Hall said there will be no removal of ‘Dixie’ until after commencement in May.

As the rebranding process continues, DSU’s primary focus will first be on any outward facing items, anything that is highly visible on or around campus. The rebranding will also include campus police cars and uniforms.

There was debate when the name change was first announced about how it was going to be funded. The rebranding process was said to cost around $3 million in total.

“Spencer Cox included funding for rebranding in his Fiscal Year 2023 budget request,” Hall said. “DSU plans to request funding for the rebrand from the state legislature during the 2022 session.”

Hall said the university won’t know for sure if state funds will be provided for the rebranding until the end of the 2022 legislative session. If that funding isn’t available, the university will use funds from its own budget. Each department head was asked to prepare their budgets in case they need to cover their departments rebranding cost for things like letterheads and cards.

As far as the website is concerned, DSU already owns the Utah Tech domain, which will be utahtech.edu. The IT team is working on migrating information and content from the dixie.edu website over to the new one.

There are more than 10,000 web pages connected to the university website so DSU should expect to see the new website up and running mid-May while the team continues to finish up the remaining web pages that need to be transferred.

Hall said DSU is on track to share the new logo with the community in mid-May, which is when we hope to see new merchandise hit the campus store. Once the logo has been shared and is starting to replace ‘Dixie,’ we will see the Utah Tech University brand logo in the campus store.

As far as the athletic department is concerned, most sports teams renew their uniforms and gear annually. Each athletic program at DSU will have different needs as far as the rebranding goes. New home and travel uniforms and athletic gear will need to be reordered with the new logo.

“In anticipation of the university’s name changes, particularly in our winter and spring sports, our coaches ordered new uniforms for this season with either ‘Trailblazers’ on jerseys in place of ‘Dixie State,’ or with the stand-alone white bison head logo,” said Steve Johnson, associate athletic director for media relations and collegiate licensing.

There are several athletic fields and stadiums that will also need to undergo a rebranding: the Greater Zion Stadium, the Burns Arena, Bruce Hurst Field, Karl Brooks Field, the Habibian weight room and the student activity center. DSU has begun the discussion process of how the Burns arena playing area is going to be redesigned and rebranded.

As the university is rebranded, DSU’s reputation may be changing.

“Dixie State University has a strong reputation for a personal, hands-on education at a great value,” Sharp said.

Sharp said name recognition takes time, but the faculty is confident that the new name and mission statement will increase and expand the academic reputation in a positive way.