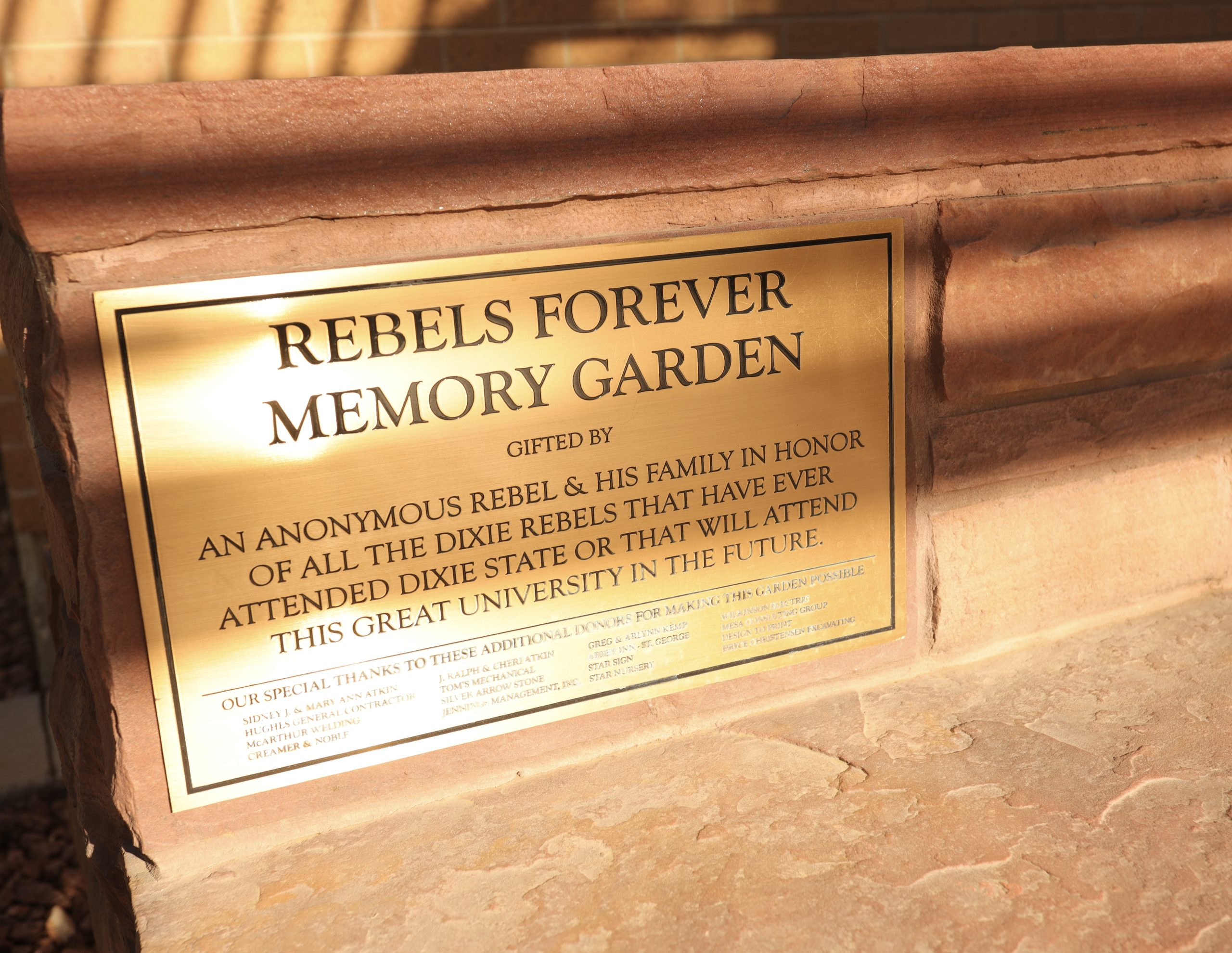 There are eight memory gardens on campus that not only honor the alumni, but also provide students with perfect study spots where they can enjoy the beauty of campus and diversify their learning experience. Misha Mosiichuk | Sun News Daily

The Rebels mascot identity on campus isn’t erased completely and is remembered near the Browning Learning Resource Center.

As part of the centennial celebration in 2011 and dedicated in 2013, eight memory gardens located throughout campus were gifted by different donors who attended Dixie State University throughout the years. They all include a large U-shaped stone bench, a picnic table, multiple electrical outlets and even wireless internet access. The names of the donors as well as quotes from many different famous authors are engraved into the stone benches. They are the perfect location to enjoy studying outdoors on campus.

One memory garden on campus, located right outside of the Browning building, features the phrase “Rebels forever” engraved on the stone bench. The table legs also have cutouts that read “Rebels” and the plaque states, “Rebels forever memory garden gifted by an anonymous Rebel and his family in honor of all the Dixie Rebels that have ever attended Dixie State or that will attend this great university in the future.”

The Dixie Rebels was the common nickname until the mascot changed and before DSU became a university. The mascot had ties to the confederate south which made it necessary to retire before attaining university status.

The garden also showcases a plaque with the song “Two Little Boys” by Edward Madden. Ten years ago a confederate soldier statue was removed and was recently filled by a bison statue near the Cox auditorium. This statue was created based on that song.

Although the statue was replaced to show the disconnection the university had to the antebellum South, the memory garden will remain on campus even as we embrace the Utah Tech University name.

Brad Last, vice president of advancement/development, said: “The people who put those [memory gardens] in… they called themselves the Dixie Rebels and I think it was pretty innocent at the time. So when we put those in for them it was just reliving happy memories of being here in college and associating with their friends.”

When the Rebel mascot was retired, the decision of the trustees keeping Dixie but removing Rebels separated the Dixie Rebels direct tie to the confederacy. It changed the connotation sufficiently for the time when this was occuring.

Jyl Hall, director of public relations, said: “To show the institution’s appreciation, the university offered each donor the opportunity to customize their garden. The donor of the Rebels forever garden attended Dixie while the athletic identity was the Rebels and the garden is a nod to their time at the institution.”

When the Rebels forever garden was constructed the mascot had already changed, but to honor the donors and their history on campus it was appropriate.

Other memory gardens on campus include the names of the specific donors whereas the Rebels forever garden says “an anonymous Rebel and his family.”

“There was several people that donated in raising money for it, and there are several people who just prefer to remain anonymous and just like to be really private about their donations,” Last said.

As DSU moved away from Rebels and now are moving away from Dixie, Last said: “I personally don’t think that means that we need to just erase Dixie from anywhere on campus and erase Rebels from anywhere on campus. It is now part of our history and we need to embrace the future and go forward with a new name, but it’s also okay to recognize the fact that we were a different name and that maybe we viewed things differently at that point in time, more innocently I think.”

The garden is planned to stay as DSU transitions to Utah Tech University in July to continue to honor the memory of DSU alumni. Some gardens on campus may be relocated due to an increase in construction with the growth of the university.

“I think people that might have concerns about the few remaining Dixie names on campus or something like the Rebels forever… I think we need to calmly let time take care of those things and embrace Utah Tech as we move forward as a great public university,” Last said.