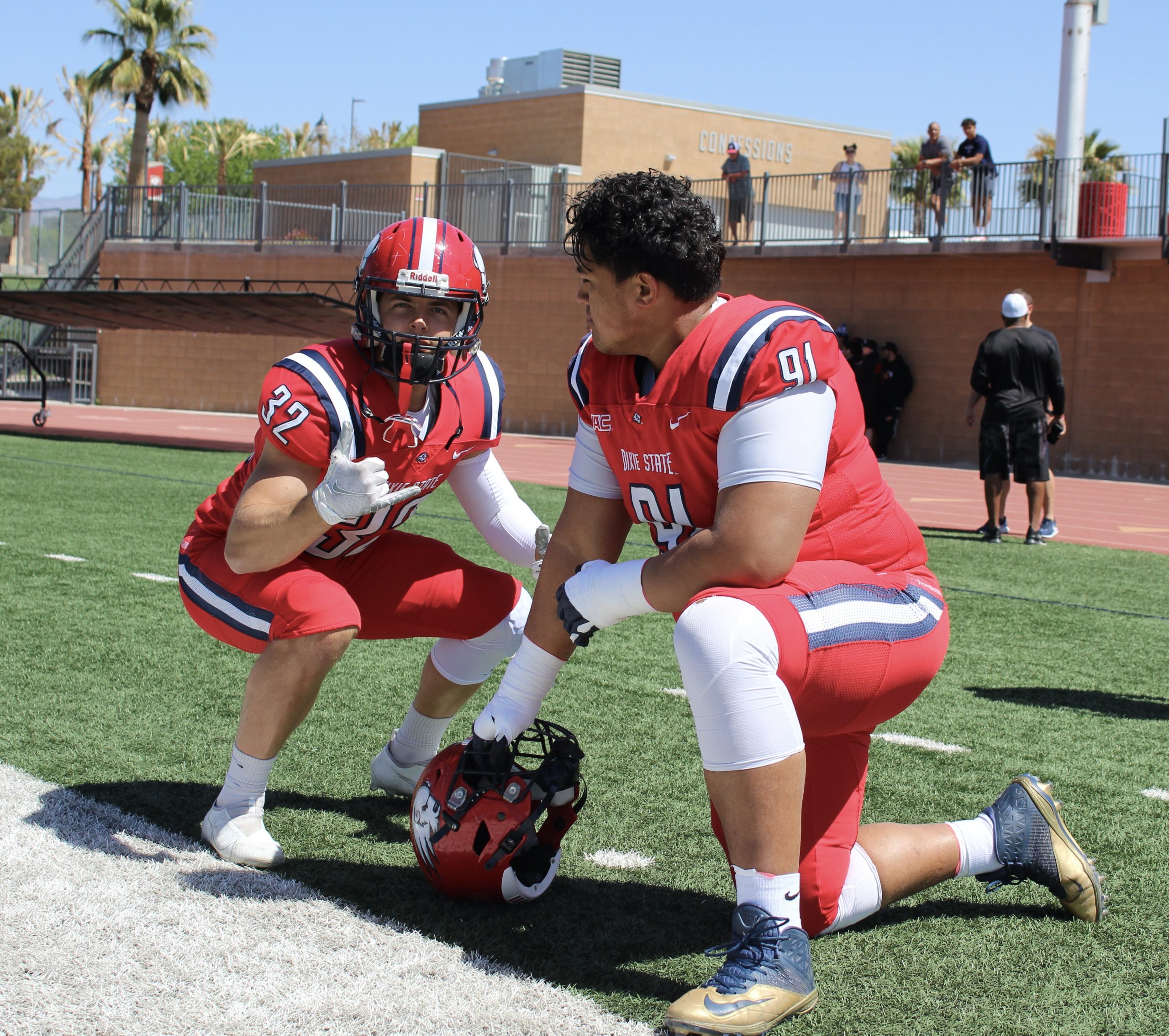 Gavin Wolcott, a freshman defensive back from Spokane, Washington, and Laytan Tanuvasa, a sophomore defensive linemen and exercise science major from Portland, Oregon, get mentally prepared for the annual spring game. The football team wraps up their spring camp with the spring game showcasing the additions of new players and coaches. Trey Urban | Sun News Daily

Over the near five-week camp, the team participated in 13 practices and finished with the annual spring game. During this time, the Trailblazers put in work to improve for the first complete season in the WAC and the third season at the Division I level.

Head coach Paul Peterson emphasized the importance of the springtime practices and getting reps in during the drills. Peterson said the team came out to play every practice, every workout and every walk-through.

In hopes to better its 1-10 record from the 2021 season, the Trailblazers put in tremendous effort throughout the camp. Defensive lineman Dylan Hendrickson, a 2021 graduate from St. George, said the effort has improved in many different aspects.

“Everyone is already a little faster, a little bigger, a little stronger,” Hendrickson said. “We have a whole May, June and July to improve.”

Offensive coordinator Craig Stutzmann also said improvements were made with the offensive line, receivers and quarterbacks during the spring camp.

Stutzmann said, “I think the offensive line did a much better job at communicating and handling a lot of the games on the inside… quarterback wise, they have an understanding of the reads, now it is just a matter of shortening the gap between what you see, what your brain tells your body to do, and reacting… the receivers continued to learn how to play fast and make necessary adjustments.”

These improvements were seen throughout the spring game from pick-sixes to consistent plays. Stutzmann said consistency is “the truth of measurement of performance.”

“I’m really proud of them,” Peterson said. “They are heading in the right direction.”

The Trailblazers plan to keep the momentum going through the fall with summer workouts and practices to prepare for the tough home and away schedule they will face. The team looks to improve its winnings with the new season despite the battles that will be played against Brigham Young University and Southern Utah University, along with other WAC teams.

“Making the transition last year was difficult,” Peterson said. “We didn’t turn anything down on the schedule playing nine ranked teams and seven playoff teams we saw where we needed to get to.”

The DSU football team will play four of its 11 games at the Greater Zion Stadium. The Trailblazers begin the regular season Sept. 3 against the Sacramento State Hornets.