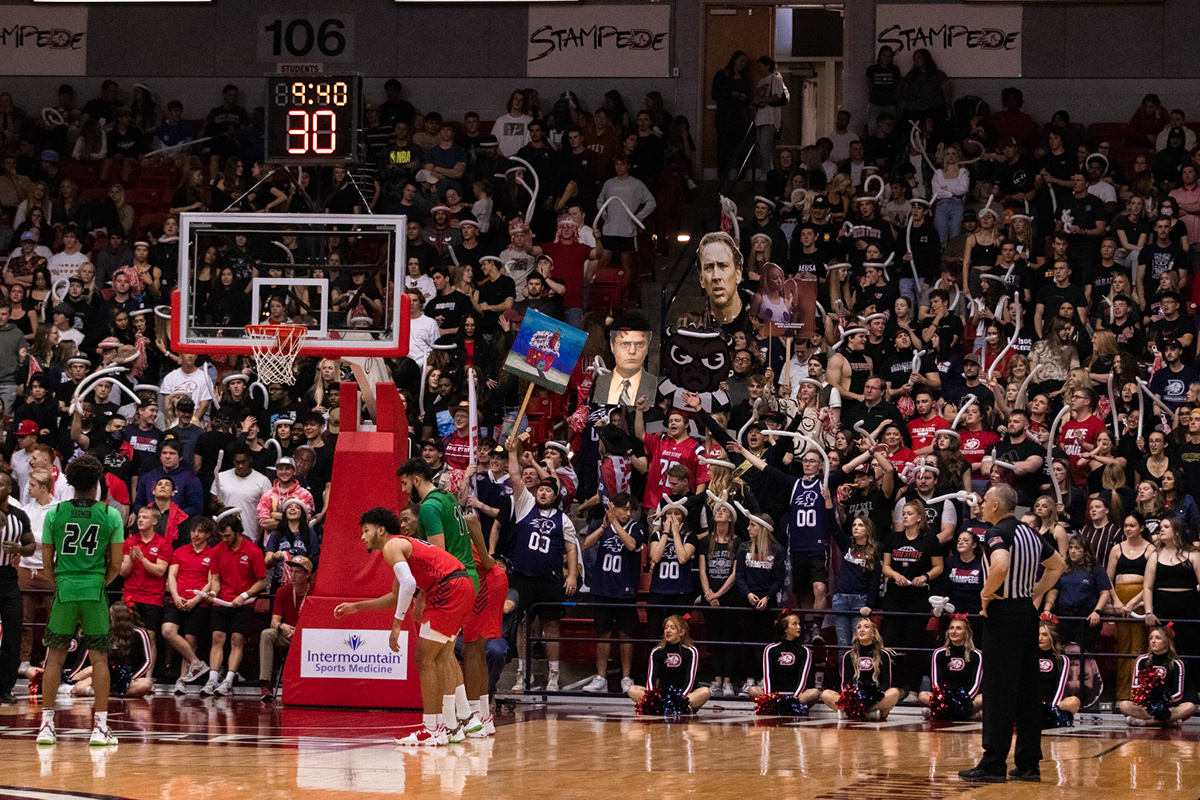 With all the competition, big games and moments in athletics at Dixie State University, the crowd and the student stampede brought the energy to help cheer on the teams.

Here are some of the biggest crowd moments at home games this year.

During this rivalry game, WSU was able to come on top with the winning score of 41-3. WSU started with a 52-yard touchdown, but as DSU tried to keep the energy high with help from the crowd, DSU scored a field goal.

This 3-point field goal was the only points left on the scoreboard for DSU. On the other hand, WSU scored another touchdown before halftime.

After halftime, WSU scored 27 more points and took advantage of the energy from the record game attendance audience Sept. 11 with 8,280 spectators.

DSU will have a chance to redeem themselves, bring the upset and utilize the energy from the crowd Sept. 17.

At the Old Hammer Rivalry, DSU played UVU in a men’s basketball game Feb. 19, and DSU pulled off an upset in overtime leading the game 80-75.

Before this game, DSU traveled to UVU to compete Jan. 8 and lost 71-79. Students of both universities are aware of this rivalry and came together in the Burns Arena. Setting another record attendance goal of 4,270 spectators

Brighton Williams, a junior marketing major from South Weber, is a captain of the DSU cheer team. Williams said the game was an intense and fun game to cheer.

“My favorite part of the season was the men’s basketball game against UVU,” Williams said. “We also got to perform at halftime with the dance team.”

The Trailblazers were able to feed off the energy of the big crowd and pull off the win. The lines were out the doors of the Burns Arena, and the DSU stampede student section did not disappoint. The Dixie Blaze dance team and the DSU cheer team joined together, kept the energy high and cheered the team to victory.

The DSU baseball team took a powerful win against BYU April 5 and set another home game record attendance with 1,951 fans.

It all started with the energy after the first two runs home in the third inning. DSU led the game 2-0. Shortly after BYU attempted to tie the score, but was unsuccessful and only scored one run in the fifth inning.

DSU didn’t give BYU the chance to come back and scored four more runs leading the score to 6-1. In the next inning BYU scored two more runs to try and shorten the lead DSU had, but it wasn’t enough.

DSU stayed on top and utilized the energy of the fan base in the nearly full stadium at the Bruce Hurst field.