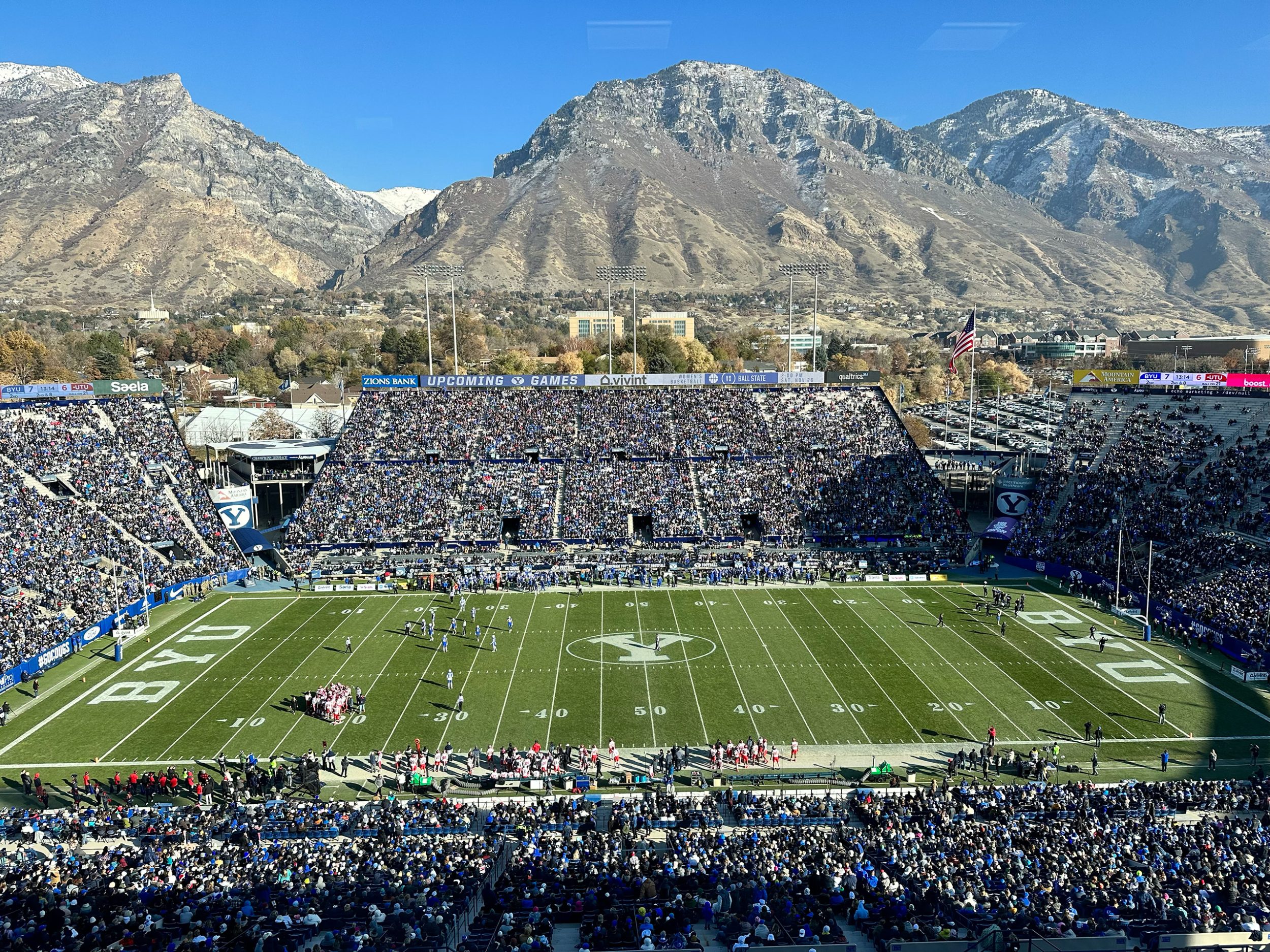 Despite a record-breaking scoring night, the Utah Tech University Trailblazers fell short to the Brigham Young University Cougars 52-26 in the final game of the regular season.

After winning the coin toss and choosing to defer to the second half, Utah Tech was set to officially start this game with the opening kickoff. A good kick and terrific special teams coverage pinned the BYU offense on its 11-yard line.

The Cougars were able to get to midfield after a couple of big plays. The Utah Tech defense was able to hold strong from there and force a punt.

Both offensives started opening drives deep in their own territory after BYU was able to pin the Trailblazers on their own ten with a punt.

Deven Osborne, a business graduate from Los Angeles, was able to get behind the defense and reel in a 54-yard bomb from Victor Gabalis, a freshman management major from Everett, Washington. The huge play got Utah Tech all the way to the BYU 34.

A holding call killed the momentum of the drive, but the Trailblazers still found themselves in field goal range. A 47-yard boot by Connor Brooksby, a sophomore management major from St. George, gave Utah Tech the first points of the game.

On the ensuing drive, a host of Utah Tech defenders was able to pop the ball free after laying the boom on BYU running back Lopini Katoa. Sam Kanongata, a junior criminal justice major from San Jose, California, was able to fall on the ball and get the offense back on the field deep in BYU’s territory.

The Trailblazers were able to get all the way down to the four-yard line but could not punch it in. Brooksby knocked in his second field goal of the quarter.

Utah Tech was able to hold the Cougars to another punt but after a failed fourth down conversion by the Trailblazer offense, BYU got the ball on their own 46.

BYU was able to get to the Utah Tech 24 on the quarter’s final play.

The Cougars opened the second quarter with a 30-yard touchdown pass to Keanu Hill. The extra point gave BYU their first lead of the game.

The Utah Tech offense was unable to respond and held to a three-and-out. However, the defense came up big and held BYU’s offense to a three-and-out as well, capped off by Mackavelli Malotumau, a freshman general studies major from Oceanside, California, who had a huge sack on third down.

Utah Tech started the drive on their own 20. After back-to-back incompletions, it looked like the offense may be held to back-to-back three-and-outs. However, on third and 10, Osborne was able to get behind the Cougar defense for the second time in the half, but this time no one was gonna catch him as he went all the way for an 80-yard TD.

It took no time for BYU to respond as the very next drive Jaren Hall found Chase Robert’s for a huge 59-yard TD.

Utah Tech started its next drive with the ball on the 25 and had a tough time getting things going, but a 22-yard gain on third and ten.

Three runs for nearly 30 yards combined got the offense down to the BYU 25-yard line. A shot to the endzone drew pass interference on the defense and the Trailblazers found themselves with first and goal on the BYU ten.

Joey Hobert, a sophomore sociology major from San Clemente, California, climbed the ladder and reeled in a nine-yard TD pass with a defender in his face.

A great return on the kickoff started the BYU drive at the 45. This great field position led to a 45-yard bomb to Keanu Hill in the end zone.

Gabalis took another deep shot to Osborne, but an under-thrown ball led to a BYU interception.

With 3:15 left in the half, the BYU offense drove down the field and scored on a four-yard pass to whoever else but Hill with just 25 seconds left in the first half.

Both offenses were rolling in the first half with Utah Tech collecting 277 total yards and BYU at 336.

The star of the half was without a doubt, Osborne. Thanks largely to his two huge receptions, Osborne had three catches for 138 yards and a touchdown.

The second-half struggles for the Utah Tech offense started with the opening drive of the second half. A contested catch on third and long by Hobert narrowly avoided a three and out for the Trailblazers, but the punt unit came out just three plays later.

BYU then went on one of the more strange and long drives you’ll see in football. A big play got the Cougars within the 40-yard line, but that is when the penalties started.

The Cougars were able to get in the red zone on consecutive, very similarity-looking plays, in a row, but penalties kept bringing them back.

After multiple unsportsmanlike conducts and a holding penalty, the Cougars were finally able to draw up a play to get them to the fifteen-yard line without being called back. Fans in the stand thought the barrage of flags was over until a touchdown reception on the very next play was called back for offensive pass interference.

Hall was eventually able to pave dirt on a ten-yard scramble ending the unique drive. In total, BYU had four huge penalties called against them on this drive negating nearly 60 yards of offense.

Aside from an interception by Jayden Sheridan, a freshman management major from West Hills, California, the Utah Tech defense had no answer for the Cougar’s offense, and the Utah Tech offense was unable to find any momentum

The struggles continued as the BYU offense was able to put up three more touchdowns in the quarter.

Unlike the previous quarter, Utah Tech was able to respond with a touchdown of their own in the final minutes of the game on an 18-yard reception by Hobert.

With his second touchdown of the game and 16th on the season, Hobert capped off an incredible year with a great outing on the final game of the season and shattered multiple school records.

When asked how he was able to find so much success in his first season with the program, Hobert said having experience under coach Craig Stutzmann’s offense during their time at Washington State together.

The second half got away from the Trailblazers, but a valiant first half against a historically established program like BYU is something to be proud of. The 26 points put up by Utah Tech are the most points scored by a Football Championship Subdivision (FCS) team against BYU.

A big blowout loss to end the year and a 4-7 record on the season doesn’t paint an accurate picture of the season Utah Tech had. The team and, offense in particular, were able to find a flow in the final four games of the season, having won three straight going into the final game.

Hobert credits the recent offensive success as the result of the rest of the guys stepping up.

Hobert said: “Our quarterback, our line and all the other receivers definitely stepped up the last four weeks… there’s going to be big plays and we gotta make them. If we don’t then we don’t deserve to be out there. There are other people who are eager to make those plays, so I feel like that really got in everyone’s head.”

Gabalis showed real resiliency and was able to come in and throw 15 touchdowns in the final four games of the season turning around what was a rough start of the year for his personal performance.

Named the week one starter against Sacramento State, after a bad first quarter, Gabalis was benched and didn’t see starting minutes until week eight against Stephen F. Austin where he threw a school-record five touchdowns in one game.

“I’m extremely proud of [Victor],” head coach Peterson said. “… that week of Stephen F. he had all the reps and just went out there and was really on fire. He’s really grown.”

Peterson said he thinks the team can continue to build off of the success of these last four weeks of the season.

Peterson said: “I think our guys are going to be excited and motivated to get to that next step, whatever that next step looks like… I think we’ll be hitting our stride perfectly. We’re right where we need to be.”