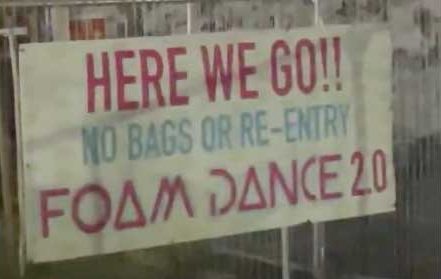 Due to weather concerns, the 2022 Utah Tech University Foam Dance was cut short, but many students question the true reason for the early stoppage.

According to the Utah Tech Student Association, the dance brought in near record-breaking numbers for non-sporting events held by universities in Utah. More than 4,000 tickets were sold, which encompasses nearly one-third of the student body at Utah Tech.

The first attempt to hold the dance was Aug. 26. About two hours into the event, which started at 9 p.m., the dance was cut short due to weather concerns.

Rumors of fights and weapons on the premise quickly circulated around campus as being to blame for the hasty cancelation. Interim Chief of Police Ron Bridge spoke on these rumors to clear the air.

“Weather service showed a lightning strike 1.5 miles from the campus,” Bridge said. “Staff acted very quickly to end the event and disperse the crowd due to the lightning. This was the sole reason for stopping the event.”

As far as weapons on the premise, Bridge confirmed a single pocketknife was found Saturday after the foam was cleared. However, the knife wasn’t found in the area of the dance. It was located in an area where it could be discarded before being searched by the metal detectors.

Bridge said the knife was not used in any crime.

As for the alleged altercations, Bridge said there was only one report of a potential assault reported to the police.

“Officers took one complaint related to an assault, which took place near the DJ stage,” Bridge said. “The complainant believed they were pushed from behind into the barrier and sustained minor injuries. We have not yet identified a suspect in the case. This assault was reported to have happened on Saturday night. No reports of assaults were reported to university police on Friday night”

Bridge went on to verify two arrests were made Friday night. Only one was in relation to the event. Both arrests involved intoxication.

With 12 officers present for the event, sturdy barriers in place, medical staff, bathrooms, water and an extensive entry process, Bridge said both nights were safe and overall successful.

Students like Kamryn Mckenzie, a sophomore music education major from West Valley, had an overwhelmingly negative experience Friday night. Going as far as to call the handling of the event “shameful.”

Mckenzie said: “I thought it was severely disappointing. Those types of dances, in general, aren’t for everyone, but still.”

Campus event planners decided to hold a “Foam Dance 2.0” the next night to make up for the lost time after the first attempt was cut short. Students had to show proof of purchase in order to get in.

Mckenzie said she was especially frustrated with the early cancelation and rescheduling. She, like many other students, took work off in order to attend the event and had to work that Saturday night.

“The culture of these dances are not safe,” Mckenzie said.

Saturday hosted roughly half the attendance of the night before with only 2,000 students at the dance.

However, Corey Gardner, a junior criminal justice major from Kimball, Nebraska, had nothing but positive things to say about the event.

“Both dances were a blast,” Gardner said. “I’m sad that lightning canceled the first, but I think everyone had a lot of fun.”

Students also complained the foam caused discomfort and discoloration in their eyes.

One of these students, Luke Shadden, a sophomore mechanical engineering major from Ventura, California, said it took several days for the effects to wear off.

“After the foam dance my eyes were red and hurt pretty bad but that was expected,” Shadden said. “It also felt like I had two black eyes. They felt bruised. It slowly got better and after about three days I didn’t notice it anymore… I still don’t regret my decision to go. I had a great time.”