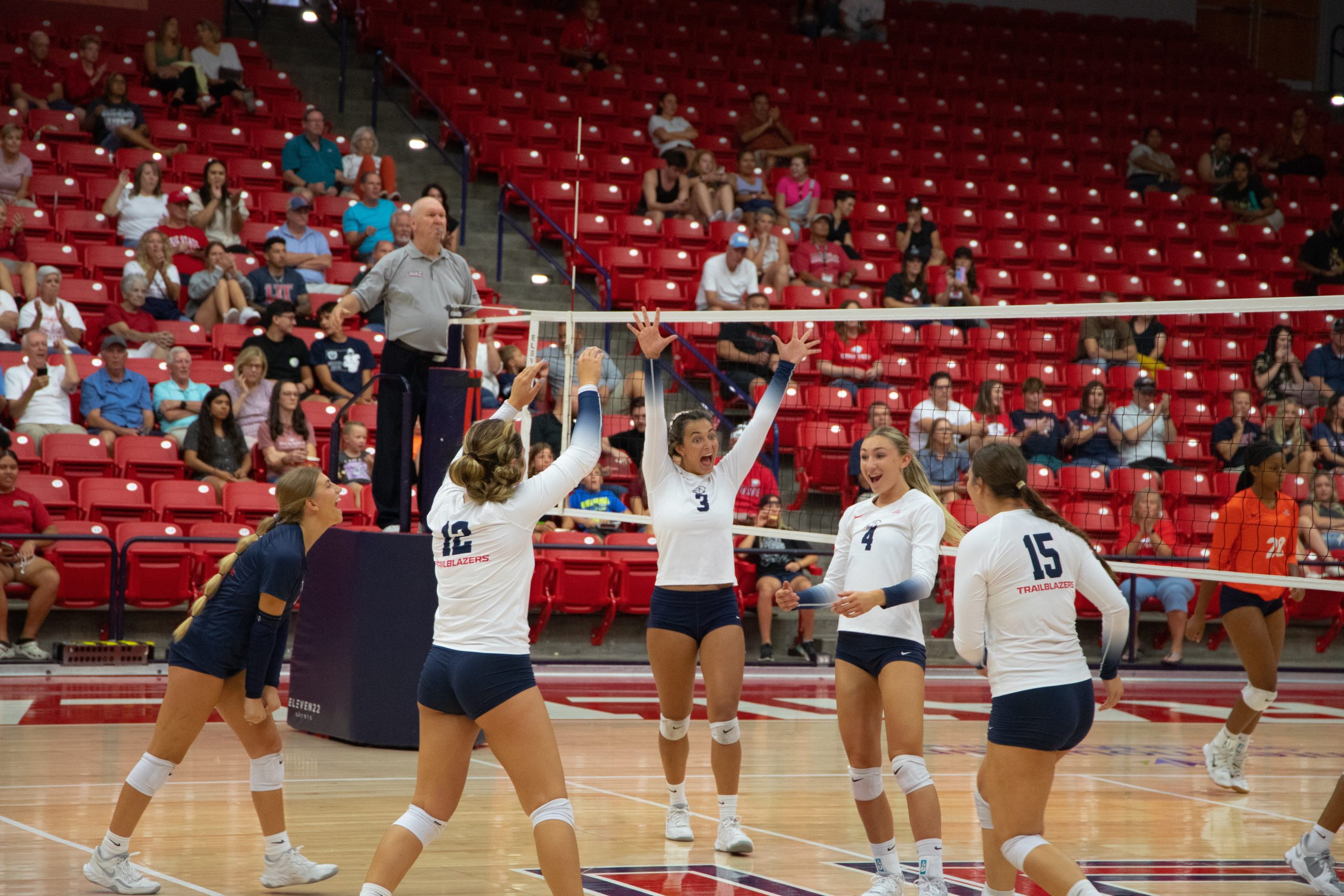 The Utah Tech University volleyball team came out full of energy for the first home game of the season and shut out Cal St. Fullerton with a 3-0 win.

In the first set, the Trailblazers took an early lead and stayed on top throughout, finishing with a 25-18 win. The Trailblazers kept their energy high and had a total of 41 total attempts and 14 kills against Fullerton.

Hannah Howard, a junior general studies major from Bountiful, had the first kill of the game, followed up by a few more kills from Chayse Daughtry, a senior recreation and sports management major from Gilbert, Arizona. The team also had a few service aces to keep them in the lead. The Trailblazers left Fullerton in the dust with a powerful first set.

According to Daughtry, team bonding plays a big role in both the energy in a game and the results of each individual set.

“We bring a bunch of personalities, and want to be here,” Daughtry said. ”I think you can see that on the court with us.”

From the stands, the team shows complete trust in each other even when the score is close. Head coach Camilla Hafoka notices both the coaches and players act in giving positive words of affirmation, which keeps the team energy alive in tough moments and plays a big role in winning sets.

Hafoka reminds the team in between sets and time-outs of what they are doing well and to be confident in themselves.

The Trailblazers didn’t let their guard down as they took a heavy lead on the last set and gave Fullerton no hope to win. With a score of 25-13, the Trailblazers left with a total of 14 kills and 35 total attempts, leaving Fullerton in the dust with a perfect 3-0 shutout.

The team kept up the high intensity and never let its teammates get down after a mistake. Instead, they hype each other up and play it off like it never happened.

Taela Laufiso, a senior English major from West Jordan said: “I think that being able to have a family aspect in your culture ups your level of play by a thousand. There is so much more to life than volleyball and that is what we focus on here. It is something that has improved everything in my life.”

Looking forward to keeping the wins going, the Trailblazers will take on the University of California, Berkeley Sept. 9.