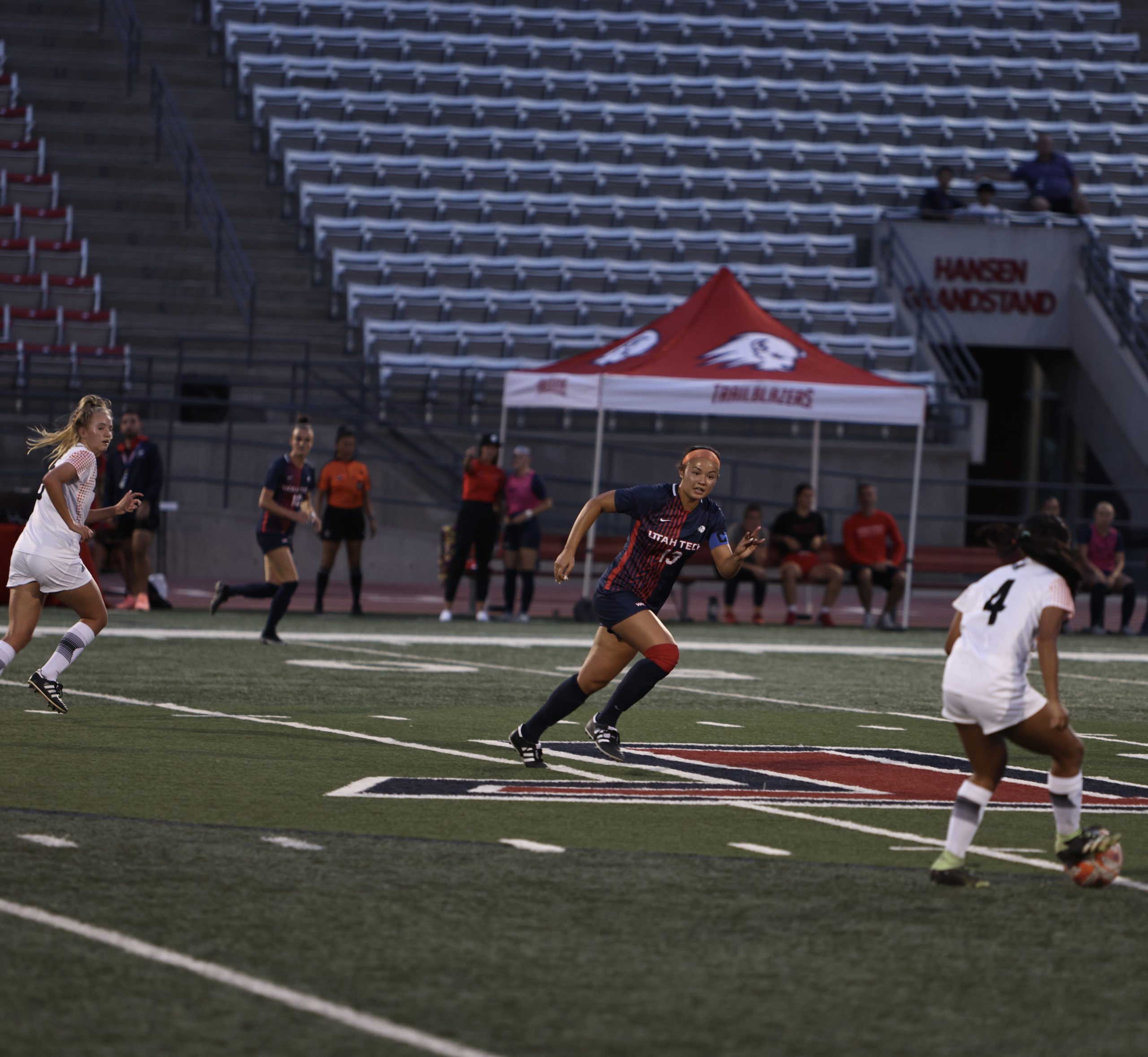 The Utah Tech women’s soccer team celebrated, and recognized, its seniors at its game Sept. 9 against Idaho State University with a 1-0 shutout.

After scoring in the last fifteen minutes of the first half and holding Idaho State to scoring no goals, the team showed how important it is to not let the energy down and not let other teammates hang their heads over a simple mistake.

Head women’s soccer coach, Molly Rouse, said this team has a good culture and ultimately cares about each other from the start, which is something Rouse and the coaching staff enjoy about the group.

“There seems to be no disparity from upper-classmen to younger players who are coming in, they are very welcoming and inclusive,” Rouse said. “I do think it is something that is helping us on the field right now.”

Keeping in mind the team environment the coaching staff wants to create, it all starts with recruitment. Something Coach Rouse looks for in players when recruiting is someone that will feed to the team dynamic that is already there as well as what it takes to be a Division I athlete.

“Us as a team, we view ourselves as a team that can grind things out, and that is the mentality we are always on the hunt for,” Rouse said. “People who play really hard, people who are smart in their decision making, who understand the game and game management, those are the players we are looking for.”

Shaylynn Uyeshiro, a senior exercise science major from Queen Creek, Arizona, brings great leadership and attitude to the team and has been a steady soccer player from day one, according to Coach Rouse.

Uyeshiro said her favorite part about being on the Dixie State University/Utah Tech soccer team since her freshman year has been growing with the team and seeing all the accomplishments they have met since her first season.

“I like seeing how every year girls come in and prove themselves and we are a different team every year, and I think that’s the greatest part about soccer because your never the same team.” Uyeshiro said.

Uyeshiro said that the ultimate goal is to keep improving the little things and eventually make it to the team goal of winning the WAC championship.

Jaci Cook-Dandos, a senior biology major from Farmington, is a vibrant player on the field, great at lightening the mood, and is good at being able to infuse energy into the group, according to Coach Rouse.

Cook-Dandos said her favorite part about being on the DSU/Utah Tech team is being able to play through all of the changes including, coaching changes, name changes and players.

“It has been a really cool ride,” Cook-Dandos said. ”Through the change is when you learn the most about yourself and how you learn to be adaptable. You get that grit and motivation, and I wouldn’t change a thing.”

Cook-Dandos said some of her biggest friendships were made from being on the soccer team and that having a strong bond with your team is vital to winning games.

“Not only is there close individual bonds but the close bond with the team. The feeling of belonging and sense of purpose within the team is just unmatched anywhere.” Cook-Dandos said.

The team is preparing for its next match against Stephen F. Austin Sept. 16 at the Greater Zion Stadium.