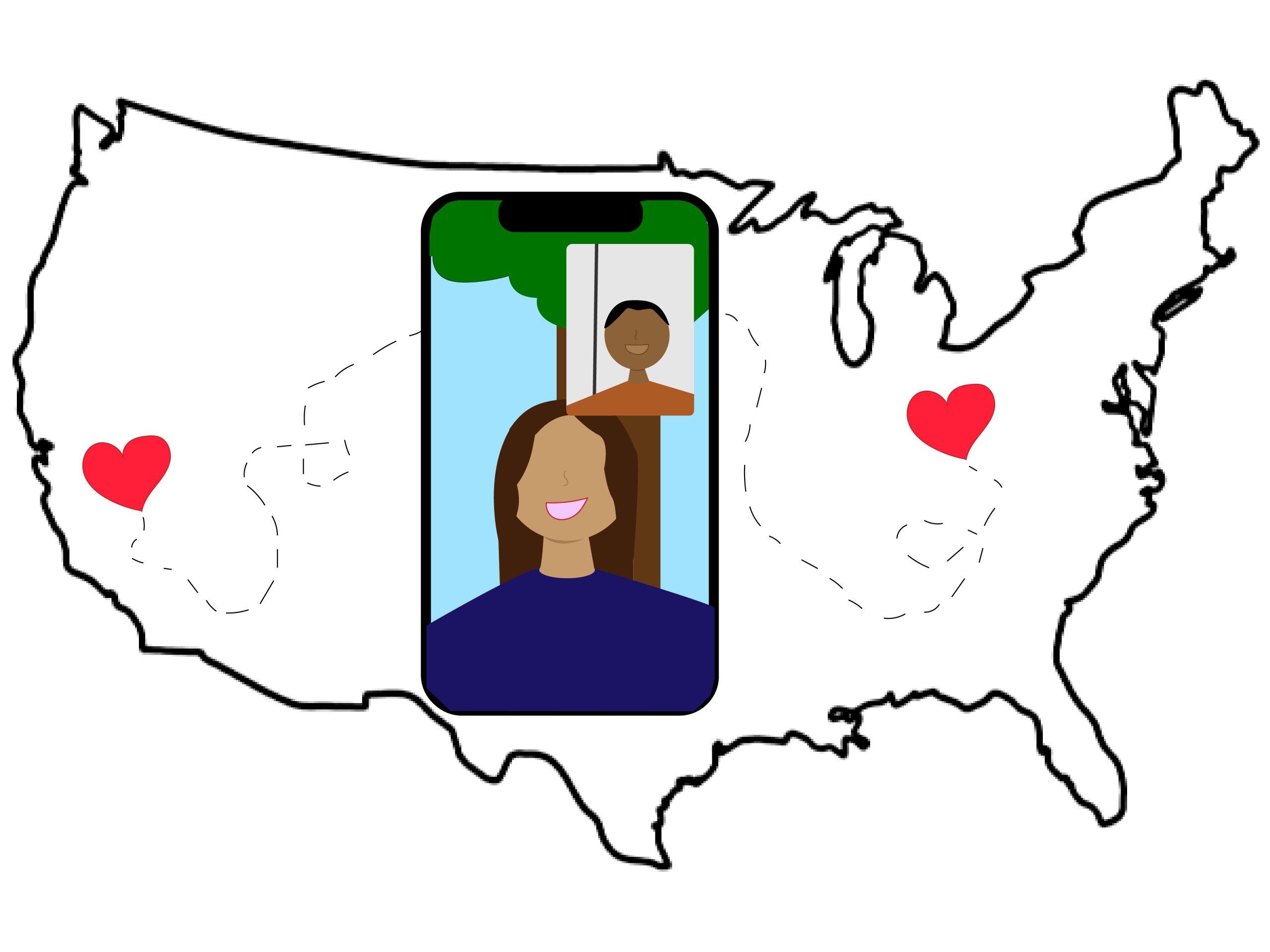 Long-distance relationships have been around since the internet but with newer technology they are easier to maintain. Elissa Aguayo | Sun News Daily

With technology advancing every day, long-distance relationships have become more common in society.

About 75% of U.S. college students have been in a long-distance relationship at one point in their life.

Because of FaceTime, unlimited call, text and social media, couples have found a way to connect and flourish regardless of the miles between them.

Moving out of state, transferring schools, joining the military and participating in online dating are just some of the reasons long-distance relationships exist.

Despite distance being one of the biggest conflicts, many couples have chosen to stay together and continue what they started.

Myalyn Hall, a sophomore biology major from Surprise, Arizona, has been with her boyfriend for almost three years. She met him during her junior year high school Spanish class, and after going on a date, they started dating.

Since attending college away from her partner, Hall discovered the challenges that come with having a long-distance relationship.

“Long distance itself is just hard,” Hall said. “It’s a lot of commitment, time and effort, especially when you and your significant other have completely different schedules. It can take a big toll on your mental health.”

With conflict arising in all relationships, Hall has been able to push past them with a positive viewpoint.

“The fact that I’ve been doing long distance for over a year makes us successful,” Hall said. “We’ve been able to keep our relationship growing. There’s definitely been lots of downs, but there’s also been lots of highs.”

Because Hall has been able to see all the positives in her relationship, she has the desire to continue long distance.

“Absence makes the heart grow fonder,” Hall said. “When you do long distance, you realize you’re not meant to be, or it’s the complete opposite. For me it was the opposite.”

Continuing her relationship and allowing it to be successful has stemmed from Hall finding who she is and who she wants to be.

“I feel very strongly that you need to have a personality and an essence without being attached to an individual,” Hall said. “I definitely have found who I am through experiencing a long-distance relationship and that’s made our relationship better.”

Kamryn McKenzie, a sophomore music education major from West Valley City, recently celebrated a one-year anniversary with her boyfriend. Shortly after meeting him in the pep band at Utah Tech University, he transferred to Utah Valley University to further his education.

Despite the geographical challenge, McKenzie has found ways to keep the romance alive.

“We use this cute little app called Official,” McKenzie said. “It’s a couples app that allows you to have conversations with your partner about things that you wouldn’t think to ask in a relationship. It’s a good way that we stay connected and maintain that romance with each other.”

Besides having endurance, resilience and trust, McKenzie has found the key ingredient needed to make a successful relationship.

“Being in a good relationship definitely takes having really good communication skills,” McKenzie said. “When communicating with each other, it’s important to work through problems together rather than avoiding or neglecting the other person because you’re upset with them.”

Enduring through the challenges and being able to bounce back from conflict has pushed McKenzie to see the good in their relationship.

“My boyfriend has shown me so many wonderful things about being alive, and I think our relationship is totally worth it,” McKenzie said. “I still love him with all my heart and fall in love with him more each and every day.”

Jenna Claybaugh, a freshman psychology major from South Jordan, has been with her boyfriend for seven months. She met him in kindergarten, and they reconnected through Snapchat in high school.

Although technology brought the two together, it has also been one of their biggest challenges in maintaining their relationship along with finding time to communicate with each other.

“You don’t really get your point across through the phone because there is no emotion or comfort behind messages,” Claybaugh said. “You can’t really feel the emotion that you feel in person, even over FaceTime.”

Because of their struggles with communicating though technology, arguments have been more prevalent in their relationship. Regardless of their disagreements, being together in-person eliminates many of their disputes.

“Even though we have fights, he always reassures that he cares about me,” Claybaugh said. “When we are together, all these problems that we have aren’t there anymore because we can better communicate our feelings and emotions.”

What keeps Claybaugh motivated at the end of the day are her visions for the days to come.

“Getting through school and ending up together afterwards is what’s keeping us together,” Claybaugh said. “I see a future with him and he sees a future with me.”

Although long distance can be the most trialing in the beginning, finding ways to get past the trials helps Claybaugh endure through it all.

“It’s becoming a lot easier as time progresses because I keep a countdown until I get to see him again,” Claybaugh said. “Even though it is hard, long distance is worth it. If you are both willing to fight for it, it will work out in the end.”