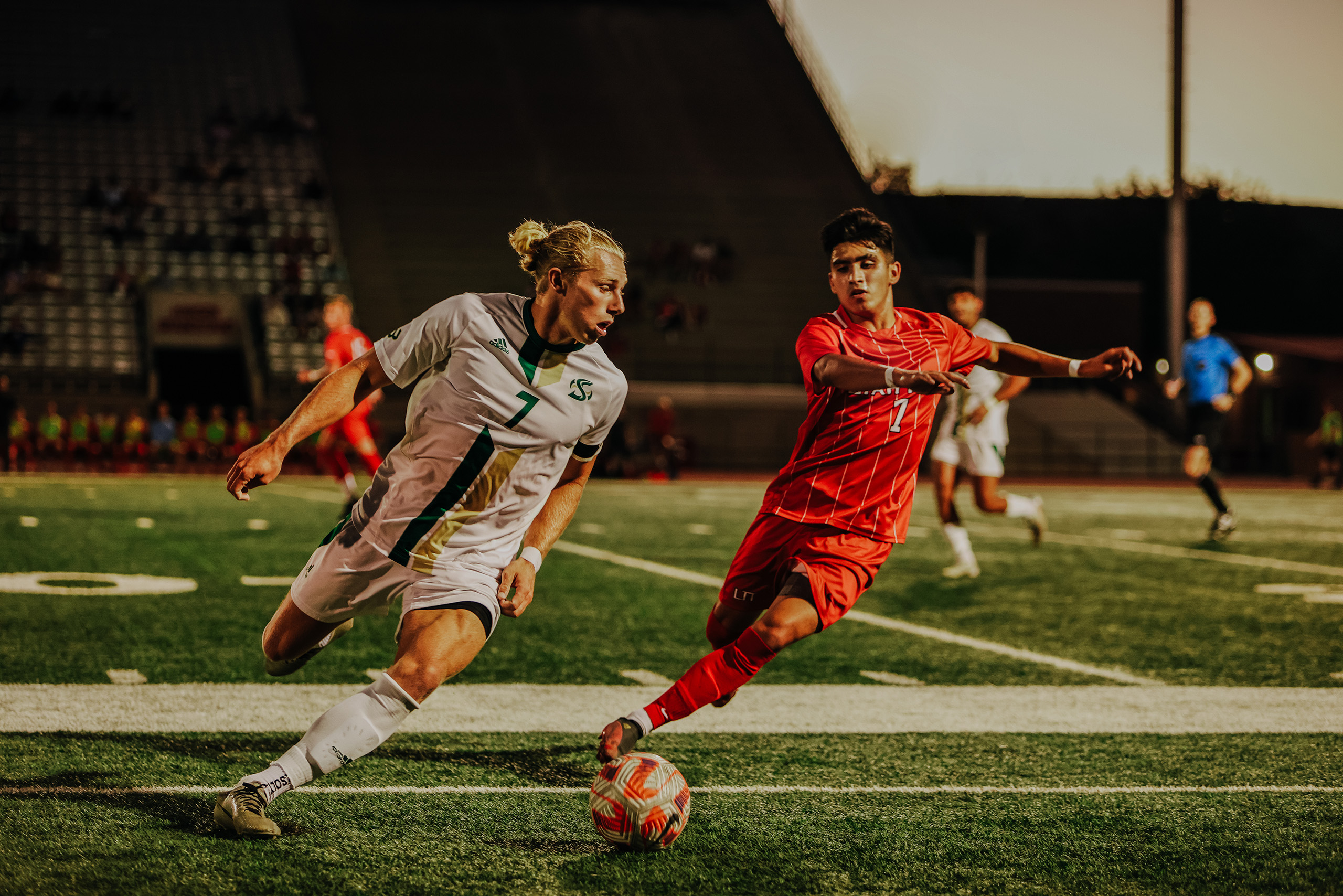 Jimi Villasenor, a sophomore midfielder from Las Vegas, intercepts the ball from the opponent during the game against Sacramento State on Friday, September 17. Misha Mosiichuk | Sun News Daily

The Utah Tech University men’s soccer team battled through but came up short in the last minutes of the night when Sacramento State took advantage of the last goal.

The Trailblazers kept the majority of possession of the first half and ended up with three shots on goal. Although the game was back and forth and the Hornets fought back with four shots on goal.

All shots were unsuccessful and Utah Tech’s starting keeper of the night, Jacob Zimmerman, a sophomore mechanical engineering major from Gilbert, Arizona, played the full 90 minutes keeping goals out until the last minutes.

Head coach Jonny Broadhead said his main focus this season is to halt the number of goals scored on them from the previous season.

Broadhead said, “We attempted to get better defensively, we let in a lot of goals last year. Then the first weekend we let in 11 goals between two games so we thought we would approach it differently, we’ve got to keep more goals off the scoreboard.”

The men’s soccer team has put up a better fight than the previous season and has only let in one goal per game in the last four games straight compared to the 11 let in in the first weekend of last year.

With the focus on maintaining a strong defensive presence, it is also important to find a good balance between not letting goals in, but also putting goals in the back of the opponent’s net.

Utah Tech defender, Julian Herrera, a pre-nursing major from Las Vegas, had a major presence in the defense stopping the hornets on their strong offensive attack while also playing a major role in the offense by taking the first shot of the night.

Herrera said his main goal is to be better than last year in goals conceded and have a better overall leaderboard score.

“Considering that we have had a hard start to the season, we have already made a lot of little improvements,” Herrera said. “One of our team goals this year is obviously to do better than last year. We were in the middle of the leaderboard last year, so we’ve already had a better start.”

Unfortunately, neither shot was a threat to the Hornets’ goalkeeper.

Bianchi said his goal is to give it his all in warm-ups, games, practices and team meetings to be a better player for his team and a good example to set. Bianchi believes in his team and has good hopes for the rest of the season.

“We are a good team, I think that we can play against every team and have a good and even match with everyone we compete against,” Bianchi said.

The men’s soccer team will play its next two games against Gonzaga on Sept. 23 and Portland on Sept. 25.