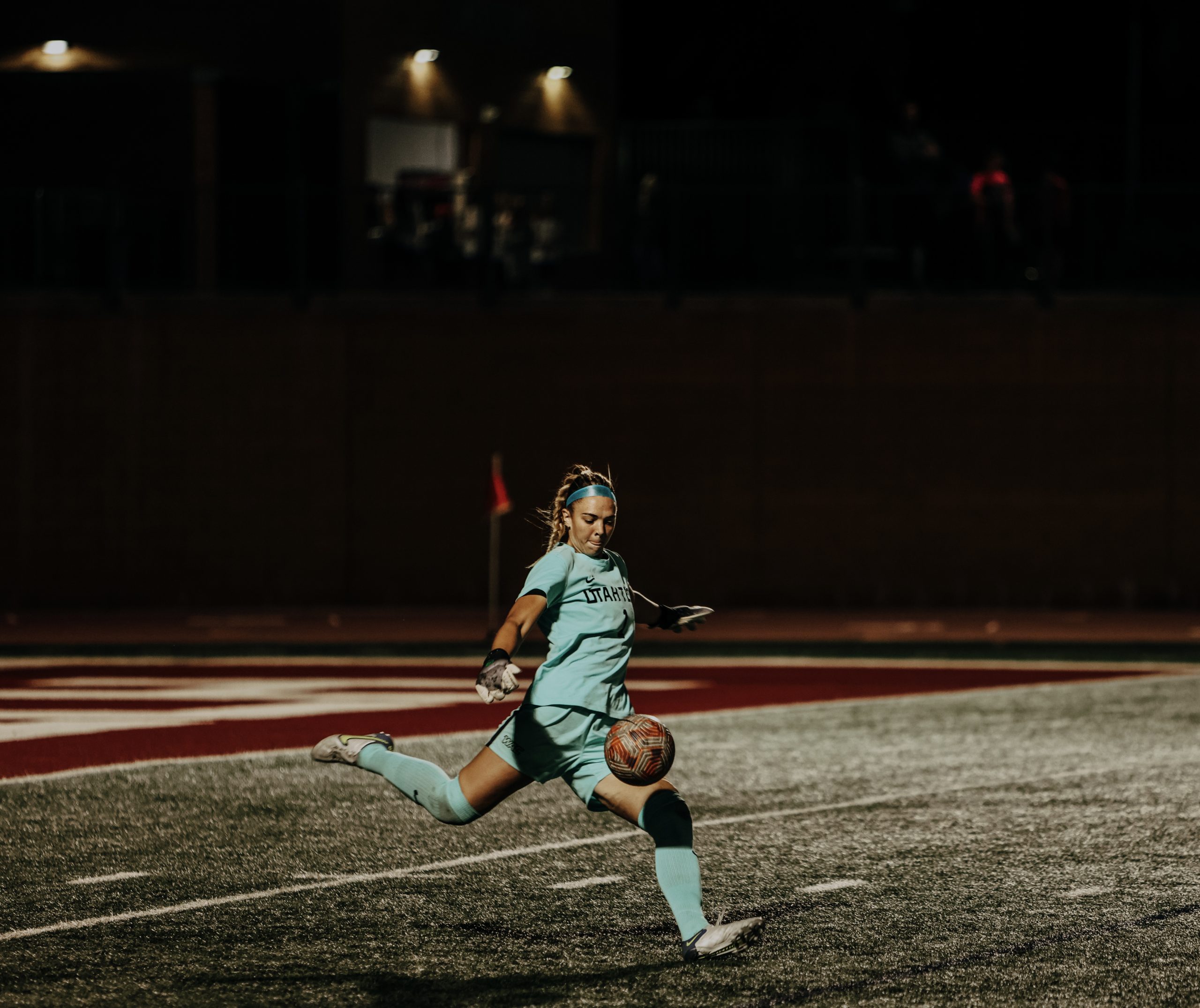 Kayla Thompson, a senior exercise major from Spanish Fork, kicks the ball before it hits the ground at the game versus Grand Canyon on October 21. Misha Mosiichuk| Sun News Daily

The Utah Tech University women’s soccer goalkeeper shows her presence through her outstanding saves and received October’s athlete of the month.

Kayla Thompson, a senior exercise science major from Spanish Fork, also received the Western Athletics Conference defensive player of the week award twice this year for her impressive saves in the defensive line.

After the two conference games against Sam Houston State and New Mexico State, Thompson saved 11 shots and secured two wins for the team Oct. 7 and Oct. 9.

Thompson has only allowed two goals in the Utah Tech goal in the last 37 minutes of game-play.

With great help from Thompson in rejecting opponents’ shots, the Utah Tech women’s soccer team has not lost a game in the last 11 games.

“It feels really good. I wouldn’t be there without my teammates. They help push me every day and get to where I am,” Thomson said.

Thompson is a great presence in the defensive line, as she is composed and calm at all times.

“I don’t know how, I just stay dialed into the game, I don’t pay attention to anything on the sidelines, and just focus on the game,” Thompson said.

Goalkeepers have a stereotypes in their position that they are loud, obnoxious players who make their presence known through their voices. Some also show many emotions whether they are under pressure or not.

Shaylynn Uyeshiro, a senior exercise science major from Queen Creek, Arizona, said Thompson is the complete opposite of the stereotypical goalie.

“She is quiet, but she makes her presence known with the saves she makes and just her game,” Uyeshiro said. “She totally defies the goalkeeper stereotype. We have to tell Kayla to get louder.”

Head coach Molly Rouse said, “She is someone that anyone can go to about anything. Her leadership comes out in that regard.”

Rouse saw Thompson as a very talented recruit right out of high school, and she had heard quite a bit about Thompson from the people in the community.

“She is someone who stands out in her maturity. She is truly driven to be the best that she can possibly be,” Rouse said.

Thompson also stands out in other aspects off the field. “She’s actually like a really good baker. She brings the coaches baked goods all the time, and that is fantastic,” Rouse said.

When Kayla has time away from soccer, one of her favorite past-times is to cook and bake.

Thompson’s favorite cookie to make especially during the fall time is pumpkin chocolate chip cookies, and she likes bringing them for the team and the coaches to enjoy.

Thompson started her soccer career as a forward when she was around 6-years-old. When she turned 8-years-old, she switched to learning goalie, and it stuck. At age 10, she knew she found her passion in that position.

When Thompson began playing goalkeeper, she idolized Carly Nelson, who played for the University of Utah, Kansas City and is now playing professionally in Denmark.

“I had a girl that I was training with that I looked up to, who is now playing professionally. I idolized her and wanted to be mostly like her growing up,” Thompson said. “She pushed me to be where I am.”

Thompson will play out the rest of her senior year at Utah Tech and continue to build relationships with her coaches and teammates, whether it be through bringing cookies for the team or showing her quiet appearance with her saves.