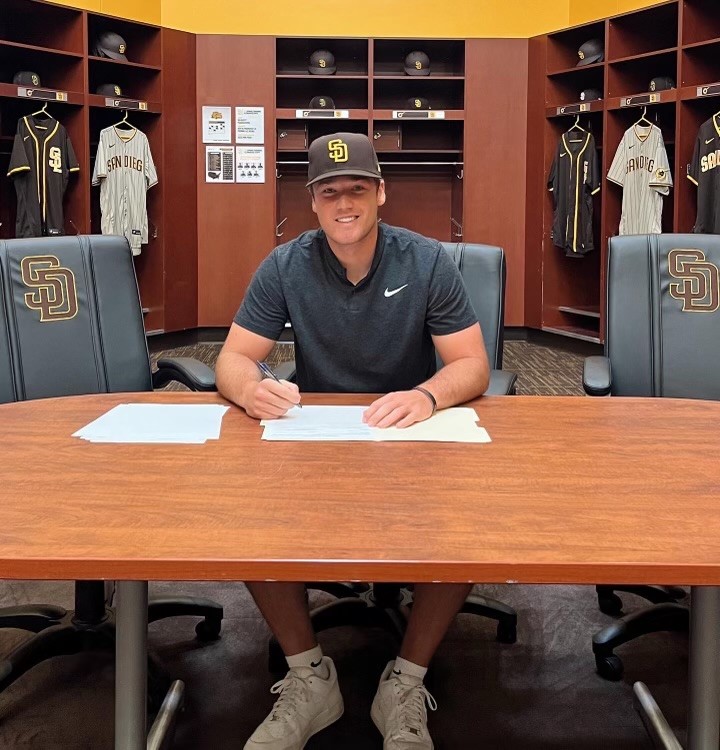 Former Dixie State University Baseball player, Kaden Hollow, advances into the next step in his career, and signs for the San Diego Padres. Photo Courtesy of Kaden Hollow.

After playing three consecutive seasons for the Dixie State University baseball team, this unique left-handed catcher took his next step into professional baseball.

Hollow spent his time at DSU proving his skill, which was recognized by not only his team and coaches but also Major League Baseball scouts.

Chris Pfatenhauer, Utah Tech University baseball head coach, said getting to go through the process of getting Hollow into playing professionally is definitely rewarding to see as a coach.

“Getting to go through that process with him of scouts being around, communicating with him, and us speaking weekly leading up to the draft was a really cool experience for both of us,” Pfatenhauer said.

Pfatenhauer said there were many different factors he saw in Hollow when he recruited him, as he is a well-rounded athlete that is skilled in every position he was placed in.

“He is a skilled defender, plenty of arm strength, sat behind the plate really well, we liked him defensively, which for that position is one of the most important things you have to look for,” Pfatenhauer said.

When recruiting Hollow, Pfatenhauer noticed the skills he had all around as well as his unique baseball traits.

Pfatenhauer said, “a long-standing joke about the fast way to the big leagues is being a left-hand hitting catcher, and certainly there is a little bit of truth to that.”

Hollow took his skills and practiced day after day when his college season ended to prepare for the MLB draft. Although Hollow did not get drafted, he signed two days prior to the draft to the San Diego Padres.

“When you’re getting ready for the draft or trying to sign as a free agent, you are working and showing yourself off as opposed to more of the team chemistry and wanting to win,” Hollow said.

In an earlier Sun News Daily article, Hollow said, “I still have a lot to prove,” and he is certainly on his way to it. Hollow always had the dream of playing professional baseball since he truly understood what baseball was.

After starting out in T-ball as soon as he could walk, he found his passion and love for the sport and jumped right into baseball and has played since.

“I always had the dream ever since I knew what baseball was when I was really little,” Hollow said. “Every paper I ever wrote that asked what you want to be when you grow up, I had always said MLB.”

Hollow is excited to get into the next step in his career without any other worries. Hollow is finishing up his recreation and sports management major currently at Utah Tech taking online and in-person classes but looks forward to being able to play a full MLB season.

“I’m excited for my season because I get to play a full season and it’s like normal,” Hollow said. “I don’t have to come in really late because of the draft I’ll get the full experience of the season.”

Hollow will finish up his education at Utah Tech and move ahead to what awaits him in his future baseball career for the Padres.