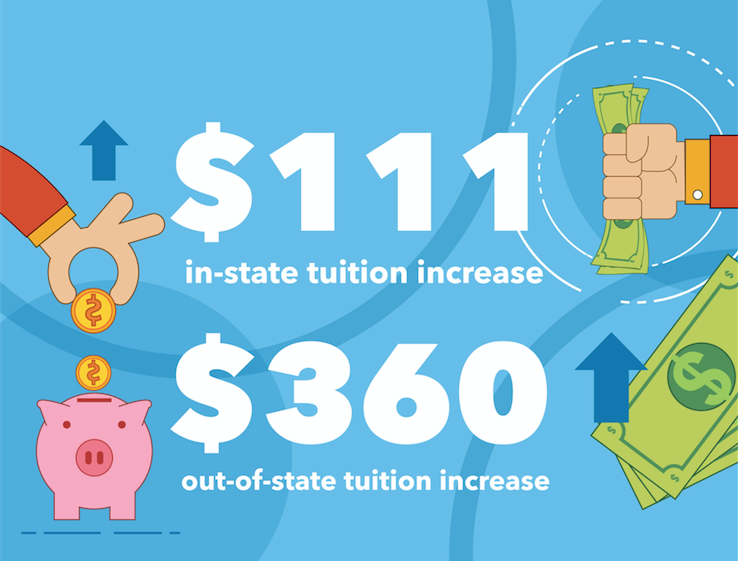 The Dixie State University Board of Trustees met to discuss matters of tuition and student fees in the Jeffrey R. Holland Centennial Commons building’s Zion Room on March 22.

The trustees approved numbers previously presented at the students’ Truth in Tuition meeting on March 5 – most notably a 5 percent tuition increase and 2.64 percent student fee increase. This results in tuition for residents costing $2,340 and $7,480 for non-residents, and student fees amounting to $408.

However, decreases were also mandated, including a $21 decrease in student computers and a 25 cent decrease to the Dixie Sun News. Rhiannon Bent, Dixie Sun News adviser, presented an argument to the board on why this decrease was unfair but was overruled.

“Seeing the college mature into a university, I have done my best to allow the Dixie Sun to mature along with the institution,” Bent said.

The concern of the committee is that the Dixie Sun was producing too much waste; however, Bent explained how the $1 of student fees pay for the entirety of printing costs. Bent also brought up other expenses that needed to be paid for that would not be able to be afforded.

Trustee members questioned Bent on the Dixie Sun’s budget and ultimately ruled in favor of the DSU Student Fee Allocation Committee to cut their budget to 75 cents.

The Dixie Sun fought for its fees in spring 2018 as well when a 50 percent cut was proposed by the DSU Student Fee Allocation Committee.

“I think this has been awesome,” said Julie Beck, a board of trustees member. “We are here because we love students and believe in what you are doing. This is an example of a student group who was elected by their peers, who has done their job the way they’re supposed to do it.”

The board also heard from President Biff Williams, who presented information about how well Dixie State University is doing specifically with retention rates. Multiple DSU faculty who serve as committee heads, including Michelle McDermott and Ali Threet, also spoke to the trustees.

DSU’s new music video, “You Will Be Found,” which was produced and performed by Raging Red, was also emphasized at the meeting and played afterward at the provided lunch.

To watch the video, visit https://www.youtube.com/watch?v=kvY51PmlmII.