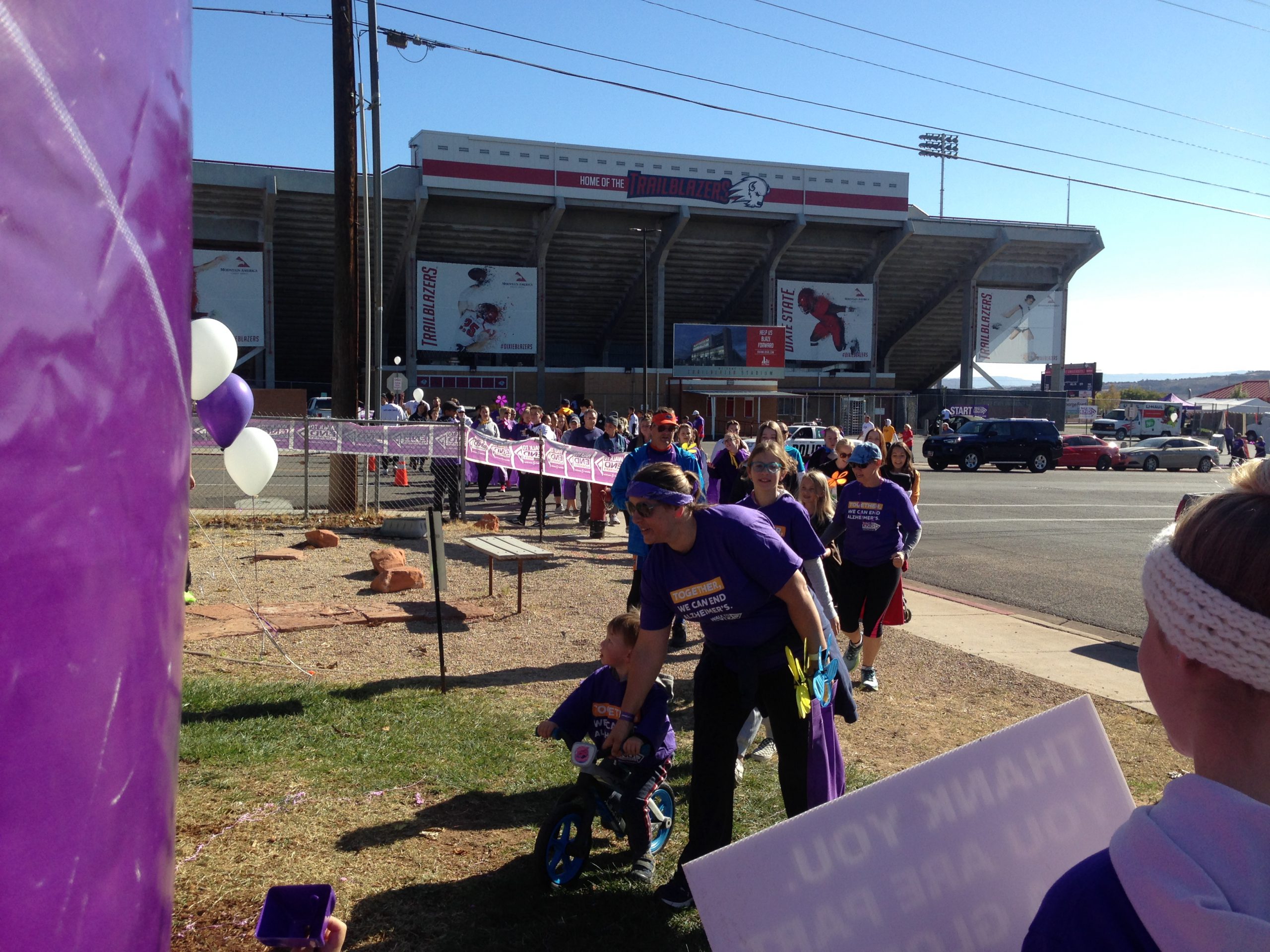 People begin their walk at Trailblazer Stadium for the Walk to End Alzheimers. DSU athletics is hosting the event for its second year in a row. Photo courtesy of Mike Miller.

“I have four teenage daughters and a husband with early-onset [Alzheimer’s], so we deal with this in my home every day,” said Aubrey Brown, the sales and marketing director at The Wentworth at the Meadows.

Dixie State University athletics is once again sponsoring the Alzheimer’s Association’s Walk to End Alzheimer’s on Sept. 14 at 10 a.m. at Trailblazer Stadium. The goal of the walk is to raise $25,000 toward research to end Alzheimer’s, and just under $12,000 of that goal has already been met. This will be the second year DSU athletics is hosting the event.

“This last year, we were the first-ever campus in the state of Utah to host the Alzheimer’s walk and our hashtag was #Blaze2EndALZ,” said Wendi Bulkley, associate athletic director of external relations. “We ended up having about 450-600 people between walking and assisting and volunteering.”

Bulkley said $18,500 was raised during the 2018 walk, and knowing DSU helped contribute to that inspires confidence in her that this year’s goal will be exceeded. She said this year she just wants to see more club and department involvement, and student-athletes will be dorm-storming to get more students involved.

Bulkley said she is the one who brought the event to DSU, and it has a personal connection for her. Her grandmother died of Alzheimer’s seven years ago and she hosted another walk at her previous job at the Washington City Community Center.

Mike Miller, the regional manager of the Alzheimer’s Association, said he’s excited about the athletes’ involvement and that the walk is a way to bring together people who have lost loved ones to the disease or who want to fight it.

“We start the program off with a ceremony that draws everybody together to the common goal of fighting the disease and identifying what their role in this fight is,” Miller said. “It might be a caregiver, it could be an individual affected by the disease themselves, it could be an advocate for the [end of the] disease, or they might be someone who’s lost a loved one to the disease.”

Brown said participants don’t necessarily have to pay to walk and that their presence just shows support for fighting the disease.

“We wear purple, we make a lot of noise, we let everybody know that there’s a big problem we need to address,” Brown said.

Brown works with residents with Alzheimer’s and similar diseases frequently since she’s also a recreational therapist.

“We just want all student-athletes and even just all students to be able to understand that there is a chance to fight for something that is honestly taking lives,” said Cameron Chatwin, president of the student-athlete advisory committee and a senior sports management major from Mesa, Arizona. “But we also want to make sure that the community is involved and just to be able to help support those that are fighting this disease and those that are carrying it.”

The opening ceremony will last for 20 minutes before the walk begins, and the walk is scheduled to finish at 11 a.m. Those interested in participating can register online at alz.org/walk or in-person on Sept. 14.