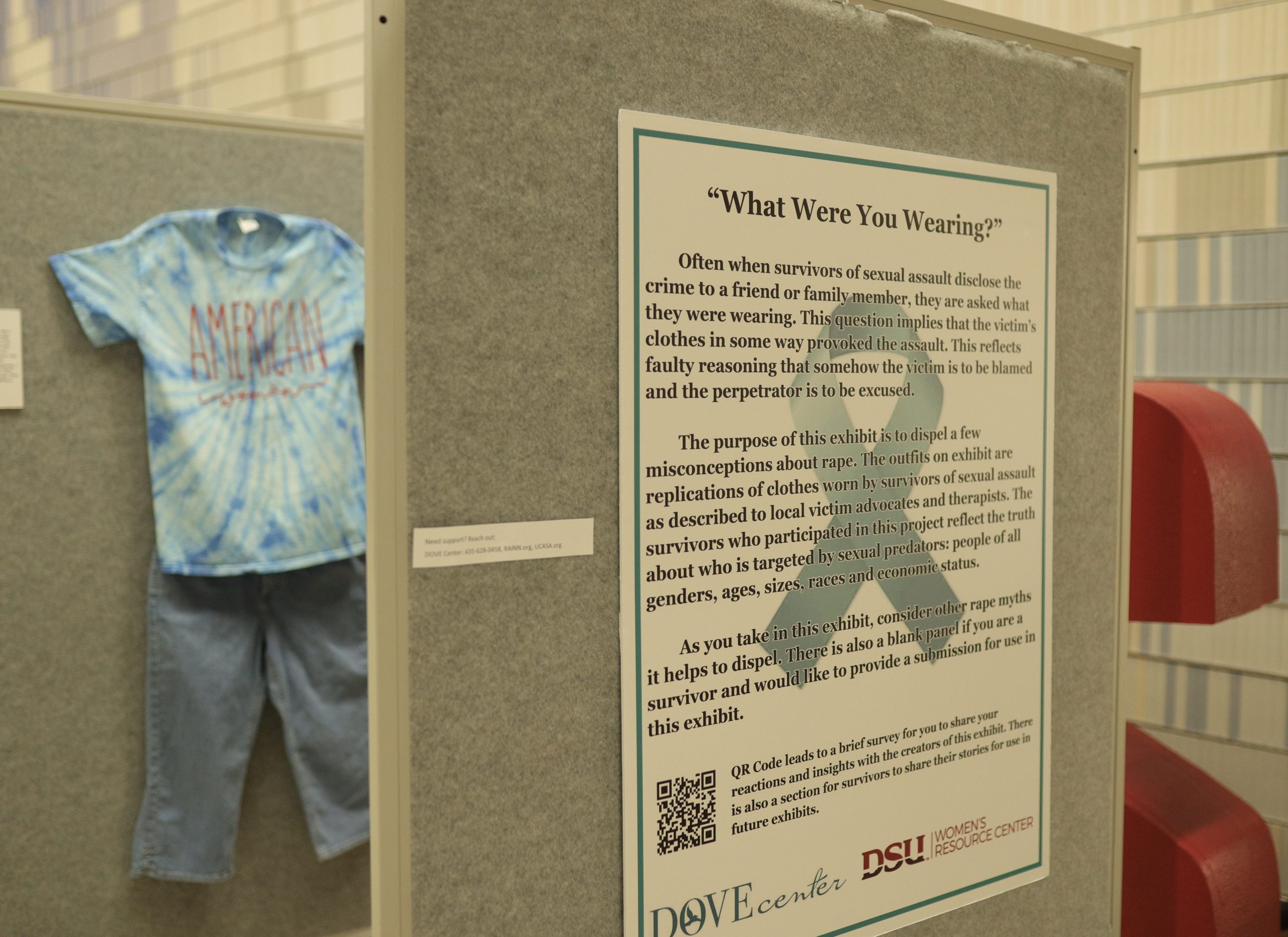 This week there were a few events held on campus that raised awareness to sexual assault, one of them being the What Were You Wearing exhibit. Misha Mosiichuk | Sun News Daily

On April 11 at 3 p.m. in the Dunford auditorium, the WRC will be hosting an event to show the Bystander Moment video. Dru Bottoms, director of the WRC, said the Bystander Moment video is a global project shown mostly on college campuses. She said this global project is especially important because it changes the way people react to “rape culture.”

Bottoms said: “It doesn’t matter what gender you are, or anything like that, it’s really applicable to everyone. When we think of sexual assault we know that male victims are also assaulted, but the primary reporters are women. Well, the Bystander Moment applies to everyone because how we react to the world around us is what makes change.”

Another event held to bring awareness to sexual assault is the What Were You Wearing exhibit. This exhibit is put on by the DOVE Center. This is an exhibit where sexual assault victims are able to share their stories anonymously. The exhibit consists of bulletin boards where victims pinned their clothes to the board along with the story about how they were sexually assaulted. The purpose of this exhibit is to break the stereotype that women are sexually assaulted because of what they are wearing. The exhibit will reopen in the Human Performance Center April 11-15.

Elizabeth Bluhm, DOVE Center education program manager, said it is important to bring awareness to sexual assault on college campuses because it educates students on how to protect not only themselves but also their peers. Education about sexual assault awareness will reduce the amount of sexual assaults on campuses and it will allow more survivors of sexual assault to come forward and tell their story.

Bluhm said: “We want victims and survivors to realize that it is never their fault, it’s someone else making a choice about their body and that person doesn’t have the right to do that. We need to educate people and help them understand that it doesn’t matter what they were doing or wearing at the time of the assault. [All that matters is] someone made an active choice to take someone else’s rights.”

Bluhm said a lot of college students are scared to report if they have been sexually assaulted because they are either not familiar with the process, or they think talking to law enforcement is intimidating. There is a common stereotype that law enforcement are not the people to talk to when reporting a sexual assault. This is because victims feel like they will not be taken seriously, and/or are often blamed for being sexually assaulted.

Blair Barfuss, DSU chief of police, said: “We’ve worked the past four years to demonstrate how DSUPD exceeds standards set for how sexual assault investigations are conducted… and [we’ve] demonstrated how we lead with industry best practices on how to handle sexual assault investigations. The image or stereotype you mention can be the result of decades of poor police investigations. However, as victims and our community learn and understand all the resources available, and how the DSUPD handles case investigations with national best practices, more victims of sexual abuse will come forward.”

Barfuss said as DSUPD handles sexual assault cases appropriately he has found that more survivors of sexual assault have come forward to tell their story. This is big for DSUPD as Barfuss said one in three women are sexually assaulted nationwide with college aged women being the majority of target victims.

While it is nearly impossible for law enforcement to prevent sexual assaults, Barfuss said this is why the DSUPD takes an active role in training, teaching and bringing awareness.

Barfuss said this is another reason why DSUPD takes action by educating students and community members about safe alcoholic beverage consumption. Barfuss said he cannot stress enough how important it is to maintain control of your own body and the environment around you.

“Ultimately, we need men and women to care more about their friends and those around them by standing up and protecting those who are too intoxicated to care for themselves,” Barfuss said. “[We need] to keep people from taking actions that could provide an opportunity for a predator to take advantage of someone unable to care for themselves.”