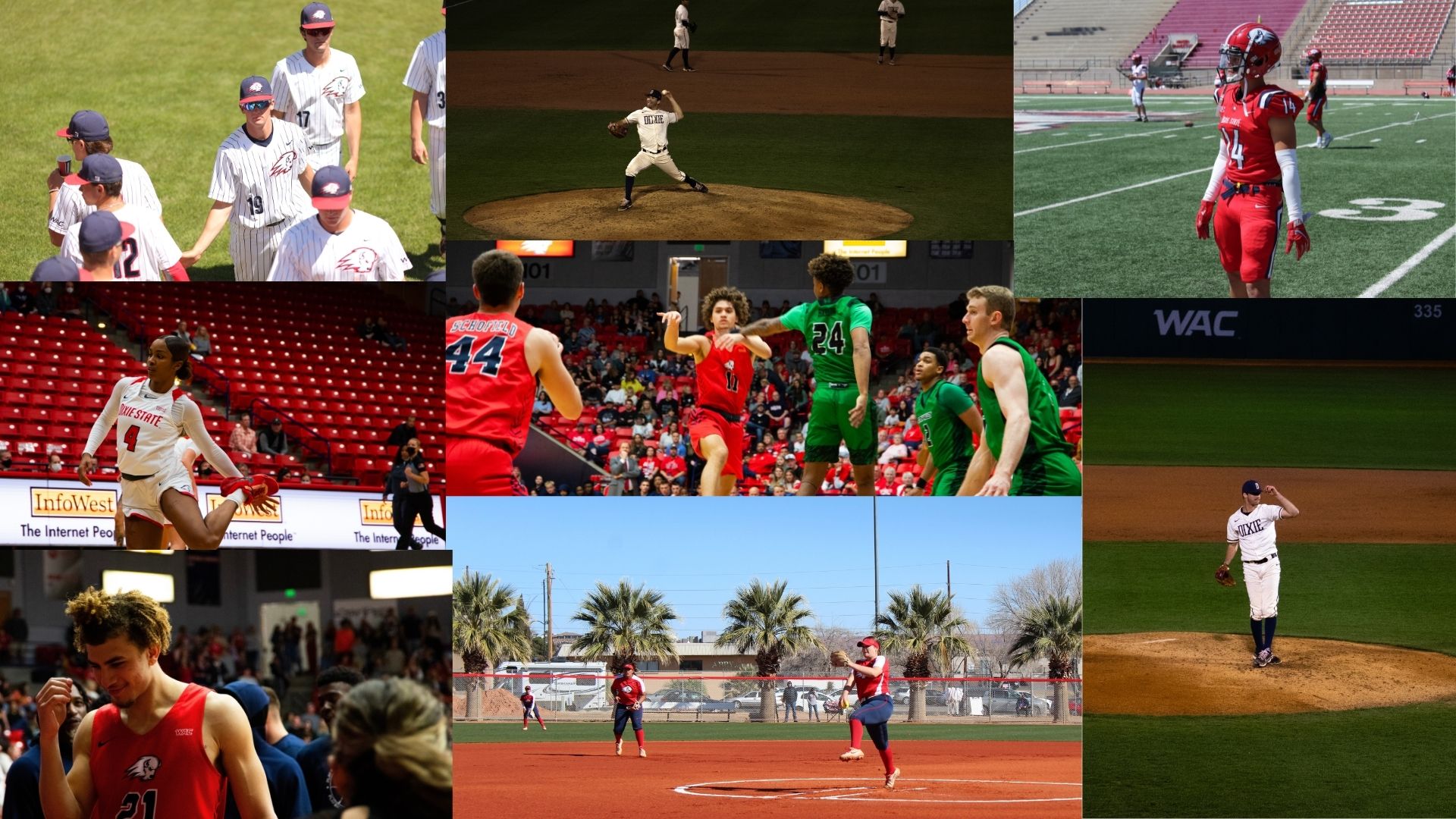 The year 2021-2022 was big for the athletics at Dixie State University. Annie Sorensen | Sun News Daily.

The transition to Division I athletics has resulted in bigger games and better upsets.

The Dixie State University men’s basketball team started its season with a hard-fought loss against Gonzaga University Nov. 9 but came back with a win against in-state rival Southern Utah University Nov. 12.

Both DSU and SUU came out fighting during this game. The first quarter started with a back-and-forth battle, but the Trailblazers later broke away going on a 15-2 run. This resulted in a score of 41-27 for DSU at the 3:03 mark.

The Trailblazers outscored the Thunderbirds 21-5 during the last six minutes of the first half igniting the crowd for the rest of the game. This led DSU to open up the second half of the game with a comfortable 17-point lead which was also the biggest deficit during the game.

DSU came out on top with combined efforts from the starters and the bench. Four Trailblazers had 10 or more points, and the bench had a combined total of 37 points compared to 20 bench points by the Thunderbirds. The final score was 83-76.

Not only was this a crucial win for DSU, but it also drew a crowd of 4,105. At the time, this was the largest home crowd since the change to DI. It was also the ninth-largest crowd to attend a game in the Burns Arena in DSU’s NCAA era.

The win against SUU set the tone for more matchups throughout the rest of the season, especially for in-state rivalries. This leads to the DSU vs. Utah Valley University upset.

The Trailblazers took on the Wolverines for the second time during the 2021-2022 season Feb. 19 and came out with a win to split the series.

The Old Hammer Rivalry broke the attendance record once more with 4,270 people. This was the largest crowd in DSU’s DI era.

DSU trailed behind UVU for the majority of the first half but started chipping away at the lead around the 13-minute mark.

Cameron Gooden, a recreation and sports management major from Frisco, Texas, raced down the floor with a steal to challenge UVU guard Justin Harmon in the paint.

This game turned out to be an overtime thriller which was not expected when DSU was down three points with less than 10 seconds left. The crowd started to disperse but quickly rushed back when Gooden was fouled on a successful jumper and made a foul shot that tied up the game 70-70.

The Trailblazers outscored the Wolverines in overtime and finished with a score of 80-75.

The DSU baseball team took on Brigham Young University April 5 at the Bruce Hurst field. This win brought the Trailblazer’s season record to 14-14.

The game remained scoreless due to the good fortune of the Trailblazers getting out of a bases-loaded one-out jam from BYU. DSU posted two runs of its own in the same inning.

The Trailblazer’s initial rally began when two of its base runners committed a double steal. Mathew Ivancich, a junior recreation and sports management major from Wildomar, California, scored on a wild pitch. The pitch also allowed Shane Taylor, a sophomore general studies major from Las Vegas, Nevada, to proceed to third base. Taylor later scored on an ensuing sacrifice fly.

BYU pushed a run across the plate in the top of the fifth inning, but DSU responded with four runs to take a commanding 6 to 1 lead. The rally of runs was contributed by multiple players, including a home run by Kaden Hollow, a sophomore recreation and sports management major from Boise, Idaho.

The Cougars attempted to make a comeback throughout the rest of the game but fell short. Although DSU was outhit 13-9 by BYU, the Trailblazers came out on top with a score of 7-5.

The new record attendance was set at the Bruce Hurst Field with 1,951 people in attendance.

All-in-all, DSU athletics has proven themselves capable of defying odds. Keep an eye out for the coming 2022-2023 matchups as DSU transitions to Utah Tech University.