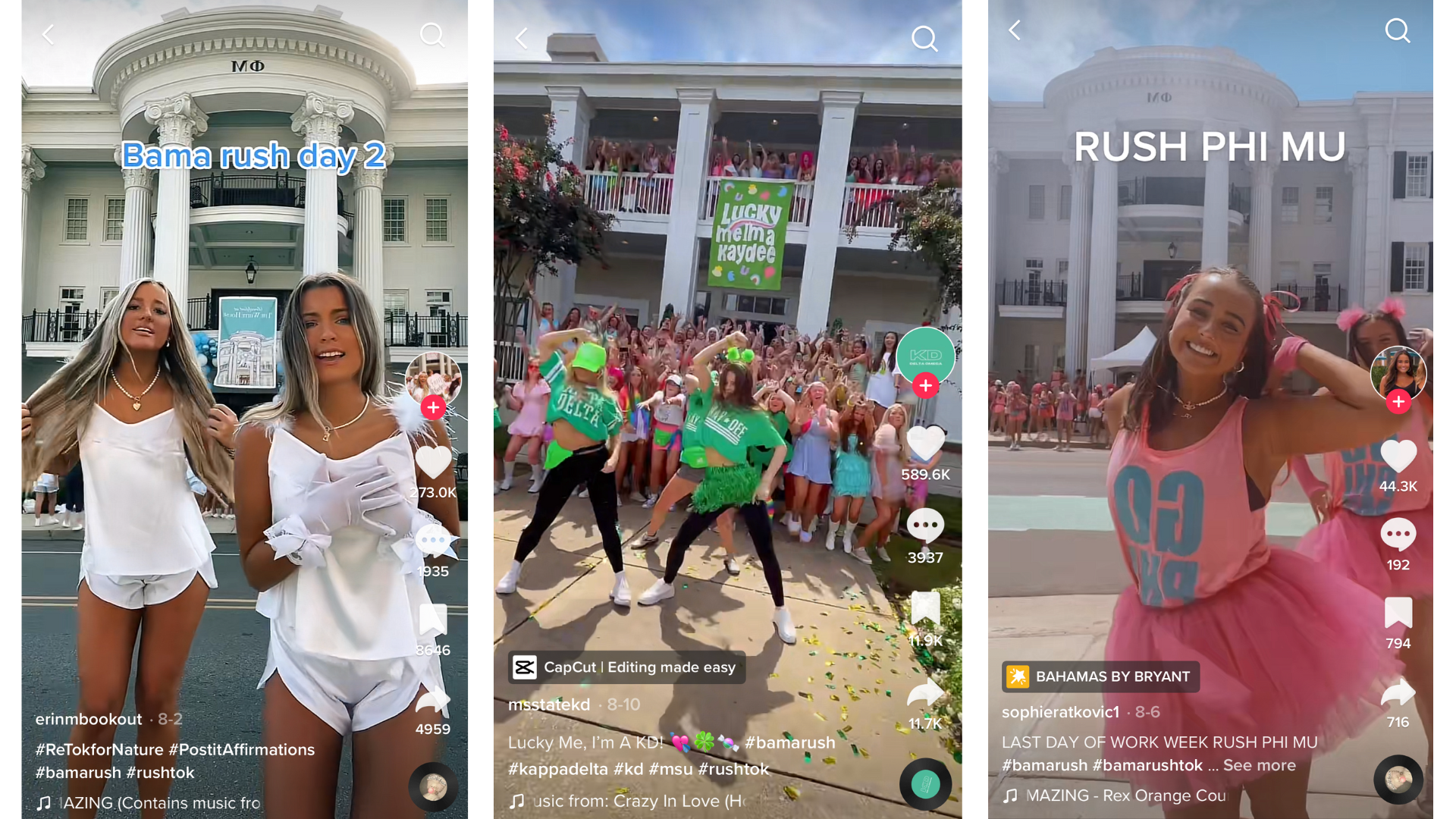 Thanks to sorority rush week, season two of #bamarush and #rushtok was the phenomenon of Aug. 2022. Sydney Johnson | Sun News Daily

I am obsessed with #bamarush and #rushtok, and that’s an understatement.

I know what you’re thinking: What is this #bamarush and #rushtok that you speak of? Well, buckle up, and let me tell you all about it.

Last year was the start of #rushtok, and this year’s sorority rush week has been deemed as season two of #rushtok. For those unfamiliar, #bamarush refers specifically to the sororities at the University of Alabama, and #rushtok refers to all universities with sororities who take part in rush week.

We get to see viral videos in this corner of Tik Tok from each sorority chapter, along with women who participated in previous years, who are taking to the video-making app to share their rushing experience. This includes, but is not limited to, content like “what’s in my bag” and “rush week necessities” videos, house and room tours, and endless dance videos that promote each chapter.

To fully understand the magnitude of the impact of sororities on campuses, there were 2,556 women who attended rush week events at UA this year. Those who want to participate in rush week to potentially get accepted into a sorority must register the summer before–a whole year before they can even attend.

Though the dancing, tours and hauls are fun to watch, what is most intriguing is the behind the scenes that give #bamarush and #rushtok a unique twist. This side of Tik Tok started out with simple, trendy videos, but it has turned into much more.

#bamarush has become such a phenomenon that it is getting its own documentary that has been in the making since last year when the viral trends began. However, a spokesperson for UA told The New York Times that the university has not authorized any third-party entity to document any recruitment activities and does not allow the media inside buildings such as residence halls and sorority houses.

I’ve never even considered being part of a sorority, but binge watching the viral Tik Toks has been quite the way to market each sorority chapter. I am part of the audience that has been sucked in, and I now want to join in on the fun of having 100 besties and dressing in matching clothes with them.

Rumor has it sorority girls will even pay for a recruitment coach to help them get through rush week and get into the chapter they want. These coaches help with putting together outfits, training for events, hairstyles, getting sponsors, letters of recommendation, and more. For those who invest at this level, it almost seems like rush week is being turned into a pageant. Honestly, if you’re loaded or have daddy’s money, why not hire a coach? It sounds kind of fun.

Now, let’s talk about #rushtok moms. I haven’t seen a ton of these Tik Toks, but I have stumbled across a few. If you think watching a girl pack her rush week bag was entertaining, just wait until you see a #rushtok mom pack her bag for move-in week. Seeing a mom be just as excited as her daughter to be part of a sorority is so pure. #rushtok moms have even started to do the viral #rushtok dances, and I am still trying to figure out if this is in a mocking way or a “I’m living through my daughter” way. Whatever it is–I love it.

From #rushtok moms, possible recruitment coaches, endless dancing, and a documentary, we get to have an inside look at what it is like to be part of a rush week all thanks to #bamatok. As a college student at Utah Tech University, I don’t get to see or experience what it would be like to be in a sorority, so that is part of the reason why I am one of #rushtok’s biggest fans because I feel like I get to be part of it all.