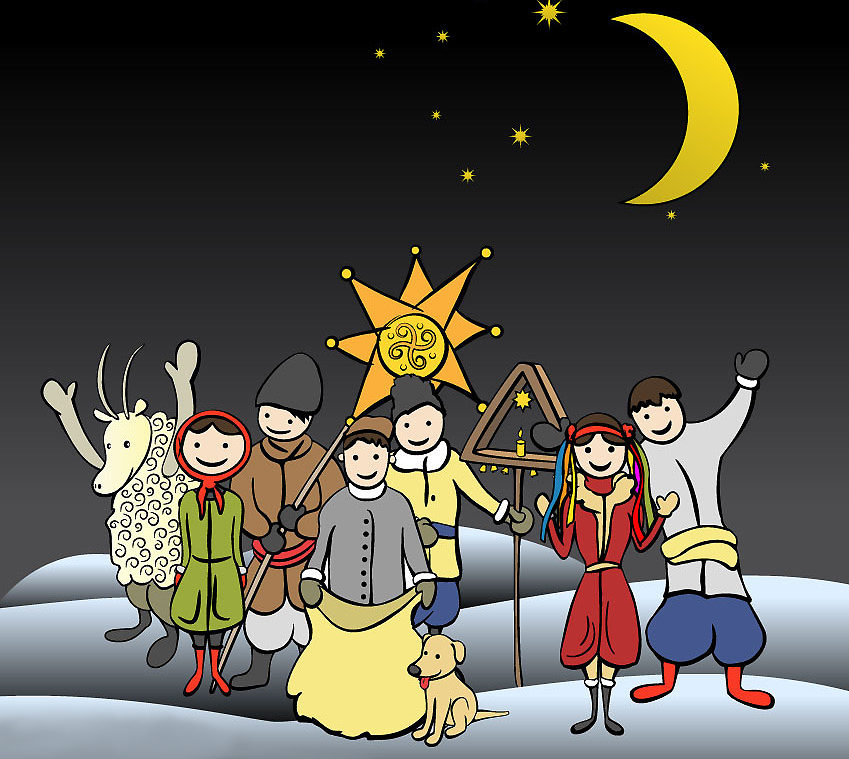 Countries around the world have their own traditional ways to celebrate Christmas. In Ukraine, for example, the traditions of Christmas Eve are dedicated to God and to the welfare of the family. In the evening, people usually come to their neighbors and friends to wish for the best and sing traditional songs while carrying a handcrafted star. Misha Mosiichuk | Sun News Daily

Many of us only know how Christmas is celebrated in the United States, but beyond the borders of this country reside many different Christmas celebrations.

Whether the holiday is celebrated on a different day of the year, with people other than family, or even in the middle of summer, Utah Tech University’s international students from around the world have shared how they celebrate Christmas in their home countries.

International Student Leader Koyo Araki, a junior accounting major from Tokyo, Japan, is one of few international students who will be heading back home for the holidays.

With family members he hasn’t seen for years, Araki looks forward to going back home, especially to see his girlfriend.

“For Christmas in Japan, it’s not really for family or religious stuff,” Araki said. “It’s more for girlfriend and boyfriend stuff like a lover day.”

In fact, Christmas Eve, Dec. 24, is considered to be the most romantic day of the year in Japan. Closely resembling Valentine’s Day, Christmas Eve is a day for couples to spend time with each other while celebrating the holiday.

Araki said it’s common for couples to go see illuminations where many lights and displays decorate the cityscapes of Japan.

Because Christmas isn’t a national holiday, Araki said: “Christmas is brought to us more by other countries, but it’s still amazing. You can see your relatives that you haven’t seen for a long time and do lots of traditions.”

Unlike Japan, Christmas day in Scotland is family oriented. It’s a time for family to come together and celebrate the holiday by eating, dancing and spending time with each other.

Anna Sterk, a freshman psychology major from Stirling, Scotland, said, “Thanksgiving is not widely celebrated in the United Kingdom, so the Thanksgiving meal Americans have is very similar to the meal Scottish people have on Christmas Day.”

Following Dec. 25 is Boxing Day on Dec. 26, where the leftovers from the Christmas meal are boxed up and given to the homeless.

Sterk looks forward to going back home to celebrate the holidays and enjoys Boxing Day and Christmas.

“I always loved Christmas,” Sterk said. “I love the fact that it’s kind of an excuse for our family to be together just for a concentrated amount of time, and everyone just seems happier at Christmas.”

Misha Mosiichuk, a senior information technology major from Oleksandriya, Ukraine, will not be going back home for the holidays but looks forward to spending break with his family here while remembering his Christmas traditions from Ukraine.

Because Christmas comes after the New Year, Mosiichuk said he, along with many others, enjoy celebrating the New Years more than Christmas, although Christmas is still one of his favorites.

“I like the smell of mandarin and the Christmas trees,” Mosiichuk said. “I also like the holiday spirit. I would say I like the feeling of the fireplace, the coziness and watching movies.”

For Christmas meals in Ukraine, Mosiichuk said the food is one of the biggest differences between Christmas in America and Christmas in Ukraine. Most of the meal consists of dumplings full of different meats and vegetables along with various cakes.

Similar to Ukraine, Christmas in Spain can be celebrated Dec. 25 but is also celebrated on Jan. 6th.

International Student Leader Sara Pruther, a junior digital film major from Ibiza, Spain, said Christmas celebrations in her home country include her family getting together for a meal usually prepared by the host.

Depending on the religion of a family, Catholic traditions are also carried out to celebrate Christmas including attending a midnight mass and celebrating the Three Kings in a parade Jan. 5.

“We have two types of Christmas, but we don’t really celebrate Santa Claus,” Pruther said. “That’s not really a thing, but instead, we do the Three Kingman, and it’s basically like Santa Claus, but just bigger.”

The Three Kings are a biblical tale where the men brought gifts to baby Jesus. Replacing the popular Santa Claus, the Three Kings bring gifts to the children of Spain.

While many parts of the world will be experiencing winter during Christmas time, Peru and all other countries in the Southern Hemisphere are experiencing summer.

International Student Leader Alvaro Lopez, a sophomore management major from Lima, Peru, will be traveling within the U.S. during break but still has many traditions that come from his home country.

Lopez said many people in Peru include nativity scenes in their Christmas decorations and also attend a mass on Dec. 24.

These masses consist of praying, chanting and mostly singing where attendees get the chance to celebrate the religious meaning of Christmas.

“I guess the whole vibe and mood of Christmas makes me feel excited for this time of the year,” Lopez said. “With the rest of the year, its just hard to gather together with family, but now we get to do that which makes this time really fun.”

Despite not going back home during break, Lopez and other students still remember the homes they came from, the traditions they loved, and the memories they made during past Christmas celebrations while looking forward to the celebrations to come for this year.