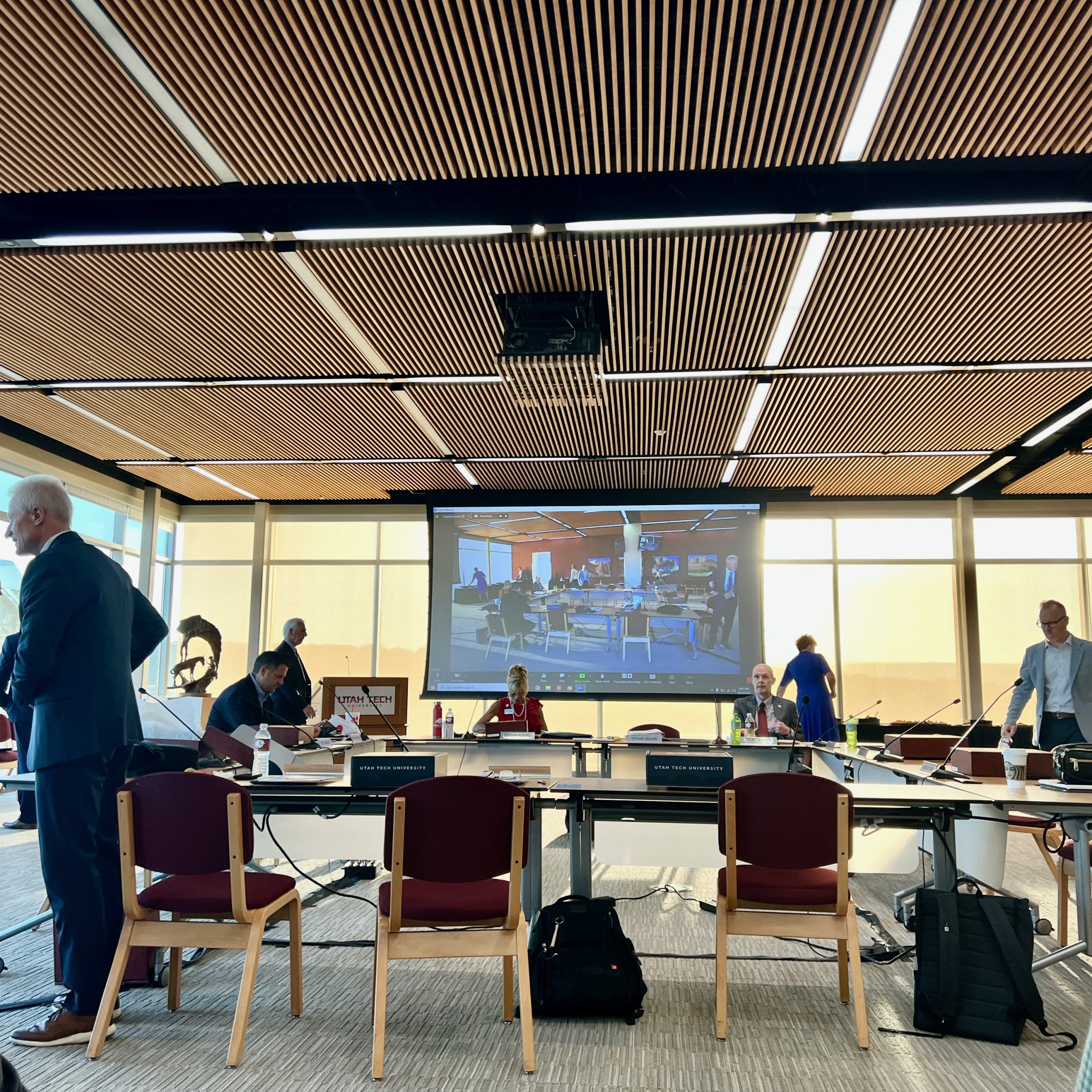 The first Board of Trustees meeting for the 2022-2023 school year was held on Sept. 23. Sophie Sparks | Sun News Daily

“This is the beginning of an amazing era in our history,” Board Chair Tiffany Wilson said.

The meeting began with four Trailblazers receiving Board of Trustees Service scholarships.

Thornton gave a few remarks on the growth of Utah Tech University, specifically on athletics and the transition to the WAC conference.

Thornton complimented the university’s leadership and how it has become a fixture in the WAC conference.

“Athletics can be a tremendous vehicle for the growth of any institution,” Thornton said. “It’s often the front porch of what is seen nationally when there is success that takes place.”

Thornton said the WAC fought extremely hard to make the transition to Division I shorter for the student-athletes at Utah Tech and give them the opportunity to compete at the national level.

“From the national standpoint, that transition has not been shortened,” Thornton said. “We do have an opportunity as a conference to allow your student-athletes to be a part of all championship opportunities because that’s what’s deserved.”

“We are thrilled to have him here as the voice of the Trailblazers,” athletic director Ken Beazer said.

Zundel’s goal is to implement shows, interviews and stories during his broadcasting presence. He also wants to bring players’ and coaches’ stories to life.

“We all have stories, and some of them are incredible… It’s my job to tell those stories so the people in the community and around the country know what we are all about,” Zundel said.

Tyrel’s said his goal with celebrity concert series and UT life is to elevate and engage the community and students through the arts.

“We are excited to announce that we will be hosting 16-time Grammy award-winning composer and producer David Foster here in February along with his wife Katharine McPhee who you may have remembered from American Idol and Broadway,” Tyrel said.

Swearing in of new trustee

Student body president Devon Rice, a senior marketing major from Bountiful, was sworn in as a board member.

The Heritage Committee recommended strategies in three parts to continue to contribute to the Dixie heritage.

“We were given a mandate by the state legislature that if the name were to be changed, they would give us 500 thousand dollars to preserve the heritage of Dixie and the area,” Wilson said.

The remainder of the meeting

The action items of the remainder of the meeting included academic department reports and new degree program announcements. This includes a bachelor’s science degree in special education and MS in nursing education and leadership.

There will no longer be a biology education minor. The computing and design department will be referred to as the computing department. There will be a new humanities center and a new institute of race, gender and identity.

The next Board of Trustees meeting will be held Friday, Jan. 27.