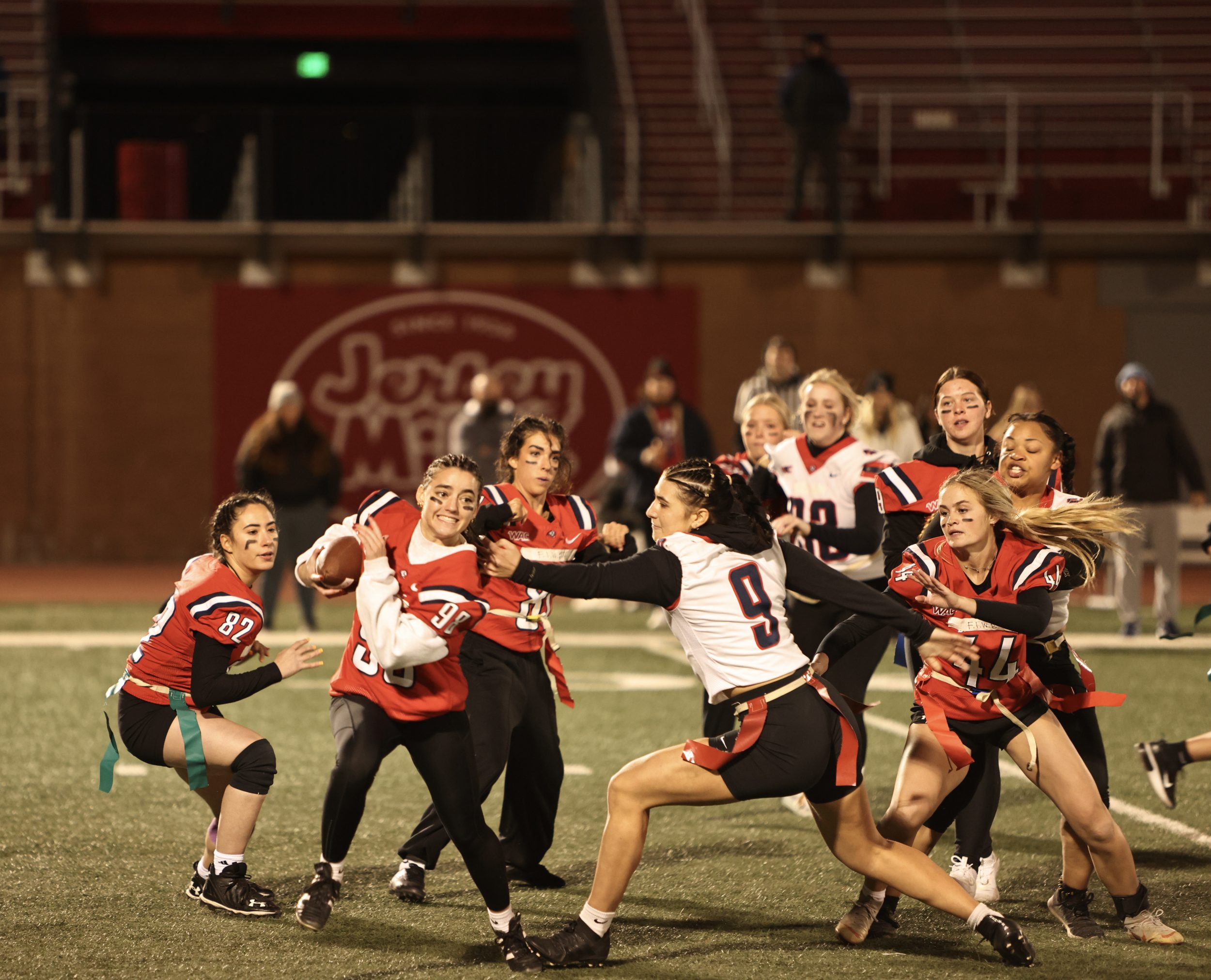 Thursday night lights take on a different meaning for Utah Tech University, as its students carried out a loved tradition Nov. 3 of Homecoming week.

Despite the chilly weather of St. George and the 9 p.m. start time, students and community members came out to support the women of Utah Tech as they competed in powderpuff.

Traditionally played by men, women at the university were given the chance to participate in a two-quarter, flag-football game.

David Howell, director of campus recreation, said students registered for the event through the school’s internal registration platform in October. With a “quick and painless” registration process, joining the team was made easy for anyone interested in participating.

Since registering, students were divided into teams and practiced three to four times a week leading up to the big game.

“Anyone who wanted to show up to practice and dedicate that time to practice was going to be able to have an opportunity to get out there and play,” Howell said. “Then it was up to the coaches to help the team structure practice and decide who was playing offense, defense and all that good stuff.”

As for the coaches, student-athletes on the Utah Tech football team were chosen to lead these teams to victory. Wide receiver Devin Osbourne, a Dixie State University graduate, coached the white team, and long snapper Baylor Payan, a senior exercise science major from Plain City, coached the red team.

“We’d like to continue having our football players coach the teams,” Howell said. “It’s a nice thing for them to interact with the students during Homecoming week to get people excited about their game coming up and get to do something a little bit different than what they already do.”

History of powderpuff as a tradition

Created in the 1970s, powderpuff has been an on-and-off tradition at the university. With it recently being brought back and added to the Homecoming schedule at Utah Tech, Howell said its reason for being gone in the first place had to do with who was running it.

Over the years, the athletic department, Utah Tech Student Association and Campus Recreation all took turns in organizing the event.

“It was a conscious effort between all the entities to bring it back,” Howell said. “Campus Recreation stepped in and said ‘It’s something we’ll be happy to take on for Homecoming week and continue to grow and build as a tradition for weeks to come.’”

John Bowler, director of alumni relations, said: “I think once you have a tradition, even if it goes away for a little bit, it’s fun to bring it back because it reminds us of our past and our present. That’s why we continue it every year, and that’s why it’s so important.”

Upon attending DSU in 1984, Bowler said powderpuff was “very different” than it is today. The game consisted of a “full-on tackle” football game with numerous weeks of practice before the game.

Luke Kerouac, director of student involvement and leadership, said: “I love how long this has been a tradition on our campus. I know people that played in this event 20 years ago, and they still come back for it.”

Part of what makes powderpuff such a beloved tradition has to do with the large number of students that attend.

Not only does the event give students an opportunity to support other students, but it also gives them a chance to enrich their college experience.

Madison Matthews, a sophomore nursing major from Sandy, said her reason for attending the game was to show her school spirit while taking a break from her studies.

By attending this yearly tradition, other students were reminded of why they chose to attend the university in the first place.

Jackson McNair, a freshman general studies major from Hockinson, Washington, said, “If there are no events for students to get involved in, they are not going to want to come to this university, and that’s the only way for a university to grow, is to put on events that students will like.”

Although the majority of the attendees on Thursday night were students, anyone was welcome to attend.

St. George resident Don Isensee saw the event on a Homecoming flyer and attended the event because of her love for the school spirit at sporting events.

Because of Utah Tech’s mission to include the community in a lot of what they do, many of its Homecoming events are open to the public.

“Anytime the community can come out and support and see our facilities just in a different light, I think it’s a good thing,” Kerouac said.

By supporting an annual tradition, the community was able to see the university in a different light while being in a fun and competitive environment.

Powderpuff participant Bella Estes, a sophomore communications studies major from Scottsdale, Arizona, said: “I love how this event is supported by so many people. Whether you are playing or cheering from the stands, powderpuff is the place to be on Thursday night.”