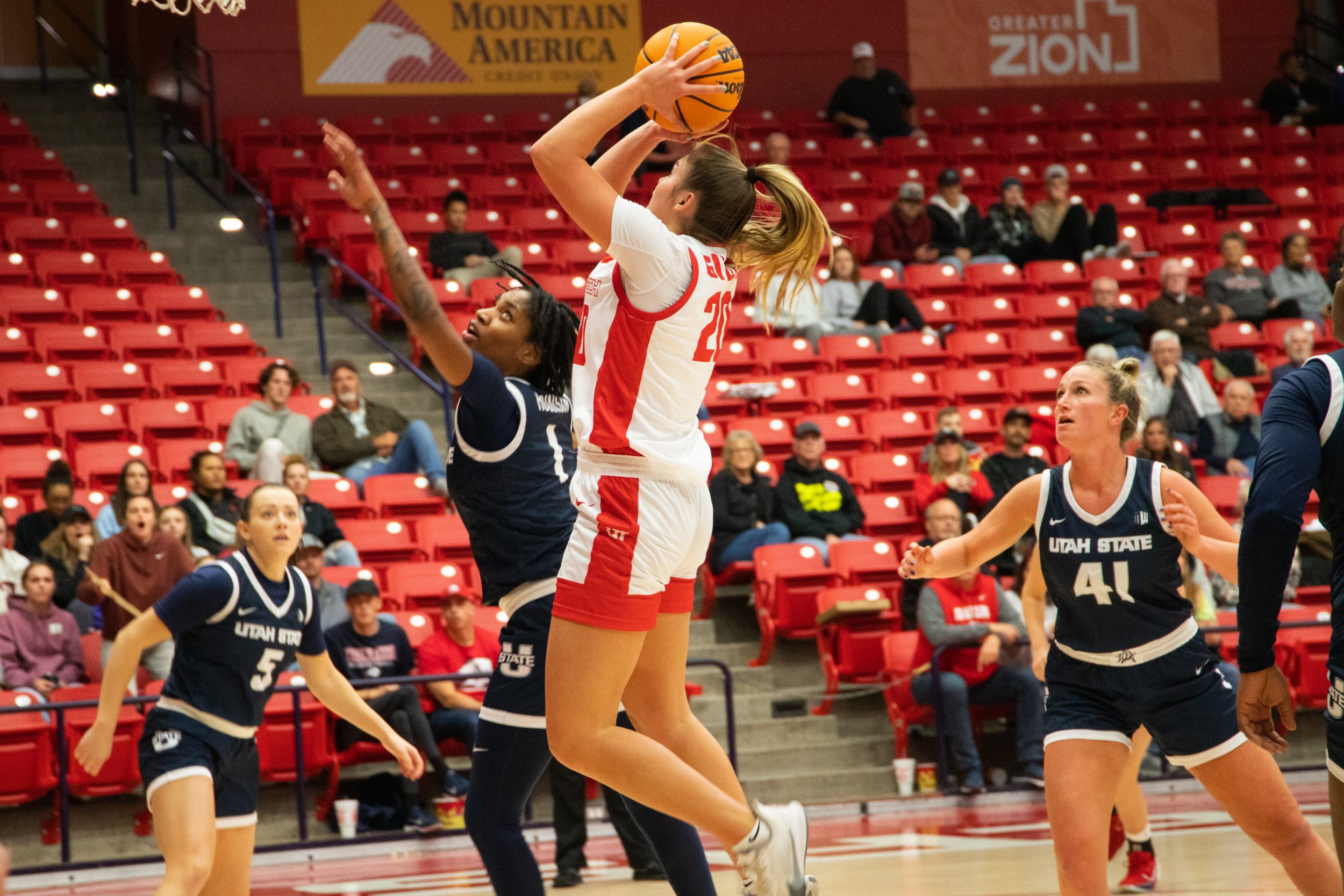 During its Nov. 15 game, No. 20 Breaunna Gillen, a senior exercise science major from West Jordan, and No. 2 Macie Warren, a sophomore general studies major from Lehi, were not only the highest-scoring players of the game but also set career highs for themselves.

Gillen increased her career high to 26 points scored in one game. Warren’s career-high increased by 18 points, as she scored 25 points for the Trailblazers against Utah State.

“I want to have no regrets,” Gillen said. “This could be my last year, so I want to play every game like it is my last and live in the moment.”

The first quarter started with the Trailblazers having strong rebounds and getting on the scoreboard first with a free throw made by No. 15 Maggie McCord, a senior criminal justice major from South Jordan.

Both the Aggies and the Trailblazers went back and forth scoring points during the first quarter. The quarter ended after a fight to get points scored with the Trailblazers in the lead 20-17.

At the beginning of the second quarter, the Aggies came back with determination and quickly scored two points. The Trailblazers did not let the Aggies get the best of them. McCord scored a 3-pointer only 22 seconds after Utah State scored bringing Utah Tech to 23 points.

Utah Tech continued to lengthen its lead against Utah State by scoring another 17 points during the quarter; six of which Gillen put up and seven by Warren. The final score before halftime was 40-26 with the Trailblazers in the lead.

Head coach JD Gustin said the focus during halftime was to better the teams’ rebound efforts and improve on making baskets at the rim. There was a lot of excitement and nerves surrounding the first game on the home court, so those emotions had to settle in order to improve the team’s performance.

The third quarter started off with a 3-point shot made by Warren. The Aggies battled back by making a jump shot only seconds after. However, the Trailblazers continued to fight and gain a higher lead.

Nine more points each were put up by Warren and Gillen aiding in shaping their new career highs. 3-pointers, jump shots, free throws and layups were made to create a lead that the Aggies could not catch up to. The Trailblazers led at the end of the third quarter 68-44.

Even after a big win, the team will continue to work and improve their skills.

Warren said: “We are focusing on taking it day by day. Even in the games, we focus on possession by possession. We want to get a little better every day.”

Utah Tech women’s basketball will be on the road next taking on Kansas City Nov. 18.