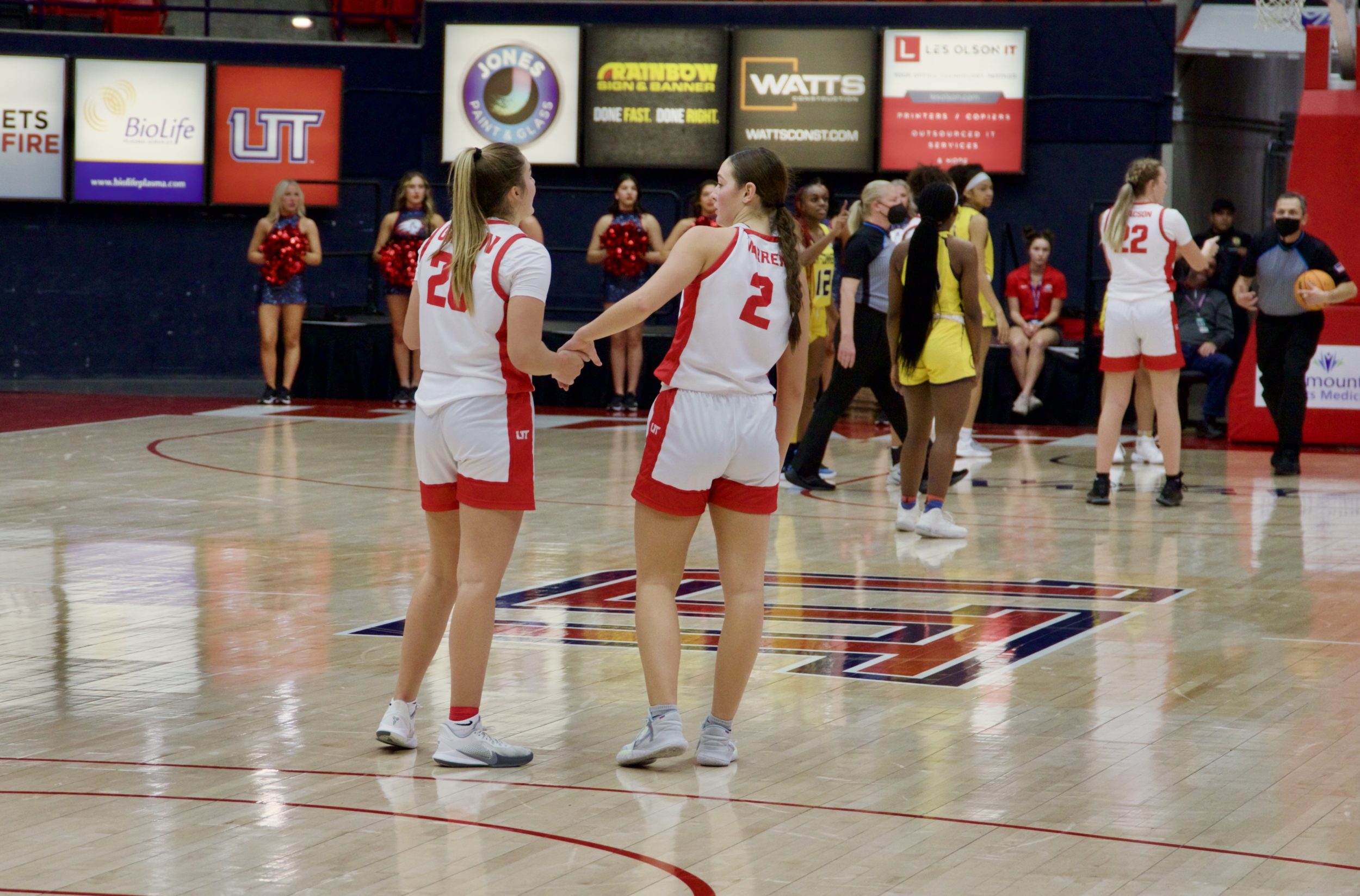 Breaunna Gillen a senior exercise science major from West Jordan, encouraging her teammates on and off the court. Annie Sorensen | Sun News Daily

The Utah Tech University women’s basketball team is off to a 5-2 start and is being led by its senior point guard.

Recently, Gillen received back-to-back Western Athletic Conference Player of the Week mentions. In addition to the WAC award, Gillen was named athlete of the month.

In response to her thoughts on receiving the awards, Gillen said: “I think they show the work that we all put in and what we’ve been working for… It’s been four years, and it’s a great accomplishment to see the work that I’ve put in and the girls have put in. It’s all coming to show.”

Gillen is currently averaging 20.7 points per game and is leading the team with a total of 54 assists.

“She can score at the rim, she can shoot, she can guard, she is a complete basketball player and is effective in all aspects,” Head coach JD Gustin said. “She is one of the best players in the country.”

Gillen said she is grateful for her teammates and how they contribute to her success from pushing her in practice to their support.

“I couldn’t have gotten the assist record without them making their shots,” Gillen said. “They are always so supportive.”

Emily Isaacson, a senior recreation and sports management major from Perry, complimented Gillen’s leadership qualities on and off the court. Gustin also said she serves her teammates and then herself.

Isaacson and Gillen work alongside each other and are Student-Athlete Advisory Committee representatives for the women’s basketball team. Gillen is also the WAC SAAC representative for the university.

“Off the court, she is leading us in community service and is the one telling us where we need to be and what we need to do,” Isaacson said.

Gillen is also a leader as the senior point guard on the team. Isaacson said the upcoming freshman and sophomores can learn from Gillen’s playing style.

When asked about someone that contributed to her success, Gillen said: “I had a coach that coached me my whole life, his name is Coach Z [T.L. Zunguze], and he actually passed away this summer. I think that’s been a huge thing for me; I just want to make him proud. He’s helped me get here and get me all the skills I have.”

Gillen is looking forward to the remainder of the season, specifically WAC play.

“I want to win, especially this year having the chance to play in conference,” Gillen said. “It’s just so exciting for that opportunity because we’ve never had that chance, and I think this year is the year.”