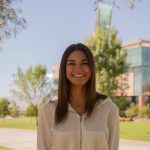 DSU leaves it all on the field, falls short in series against GCU

The Dixie State University baseball team played the No. 1 team in the WAC, Grand Canyon University, in a three-game series on April 8-10 with the team coming up short each game. Before this series, DSU capitalized on a win April 5 against Brigham Young University. The team attempted to carry the same energy from […]

Keith Davis, a junior management major from San Diego, California, shows his passion for athletics in his college career as a multi-sport athlete playing both football and baseball. Davis is a strong asset for the Dixie State University football team in the fall as a wide receiver. This 6’1″, 190-pound athlete strives to work hard […]

SPORTS OPINION | Students in college sports do not under-perform academically

It is a common misconception that student athletes under-perform in academics due to the unreal amount of hours the athletes put into their sport, but it is the complete opposite. Student athletes put in many hours a week for training, practice, games and traveling while also staying up-to-date on school work. The athletes who join […]

The Dixie State University men’s soccer team signed 12 new athletes to the 2022 roster and is still recruiting more talented, driven and energetic individuals. The team had 11 seniors in the 2021 season, so recruiting athletes to make up the number of seniors is important to keep a healthy number of athletes on the […]

Men’s golf team did not for see outcome at UCSD invite, looking to battle back for next invitational

The power of DSU cheerleaders

The Dixie State University cheerleaders practice each week to ensure perfect performances at halftimes, time-outs and sideline routines to cheer on the DSU sports teams to victory. As DSU transitioned to Division I, the cheerleaders must reach that next level to match the other Division I teams. Therefore, the cheerleaders focus on preparing routines four […]

Excitement behind intramural sports at DSU

The Dixie State University football team admitted two new coaches to the staff to continue to build the team to the wins they “deserve.” DSU head coach Paul Peterson announced the new additions for co-defensive coordinator and wide-recievers coaching positions on March 2. Shane Hunter was announced as the new co-defensive coordinator and Billy Ray […]

The Dixie State University baseball team won two of three games against Utah Valley University on March 4-6. The last time DSU played UVU, the Trailblazers won the game leading with 11 runs and ending with a score of 11-0. The win streak against UVU did not let up until the last game as the […]

Dixie State University’s dance team, the Dixie Blaze, competed at the 2022 USA Collegiate Championships in Anaheim, California, and placed second. This is the first time Dixie Blaze has represented DSU at a national tournament. The team made themselves well known and proved their skill against teams across the nation. Head Coach Kori Esplin said […]